So, hi. I’d like you to meet my good friend Bayonetta. 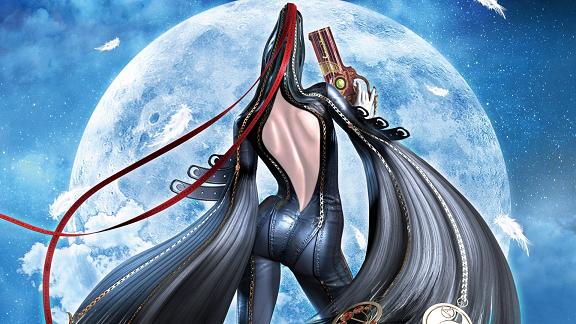 DON’T EVEN PRETEND LIKE YOU GIVE TWO FLYING FUCKS ABOUT WHAT SHE LOOKS LIKE IN THE FRONT. Anyway, she doesn’t know it yet, but Bayonetta and I are destined to become best friends. Seriously —  someday we’re going to straighten our hair and try on exuberant leather outfits. It will be glorious. Ahem. Today Sega announced this little bundle of awesome is heading to PSN next week, and therefore I feel the need to do this woman a service and vouch for her assets. (…Really? I just totally went there. That was so incredibly cheesy but I’m leaving it in there nonetheless.)

I recently played Bayonetta, documented my experience (beware for spoilers within that link!) and ultimately fell in love with the flamboyant game and the overly-sexualized, brainy, accent-ridden character that is Bayonetta. Sure I had to be a pansy and lower the difficulty to easy, but I never claimed to be talented in the art of the hack ‘n slash fighting genre. Too many button combos to remember…hnngh…but that’s exactly my point! I’m generally not a fan of hack ‘n slashers, but Bayonetta is OOZING with charm. Like, it oozes everywhere.

“Bayonetta really surprised me. I ended up practically falling in love with the Bayonetta (the character) for her sassy attitude and insane sex appeal. I mean come on, have you seen her ass?! ;D But for serious, she easily makes my “favorite characters EVAR” list. She’s a strong, sexy female character that has a brain to boot. From what I understand, though, the issue people had with Bayonetta wasn’t necessarily the character herself, but how she was over-sexualized—and from the tantalizing camera angles, her nekkid climax moves, not to mention the way she simply walks, I can see where people might be a little peeved. But holy hell, folks! This game is clearly supposed to be tongue-in-cheek.”

And as you may have heard, Bayonetta 2 is coming exclusively to the Wii U. While the release date is TBD, I’m keeping all crossible things on my body crossed (ain’t that a beautiful mental image?) for a 2013 launch.

So, hey. Remember — next week, PSN, January 29th, $19. “But I only have a 360!” WELL THEN YOU SHOULD HAVE DOWNLOADED THE GAME WHEN IT RELEASED DIGITALLY LAST YEAR.