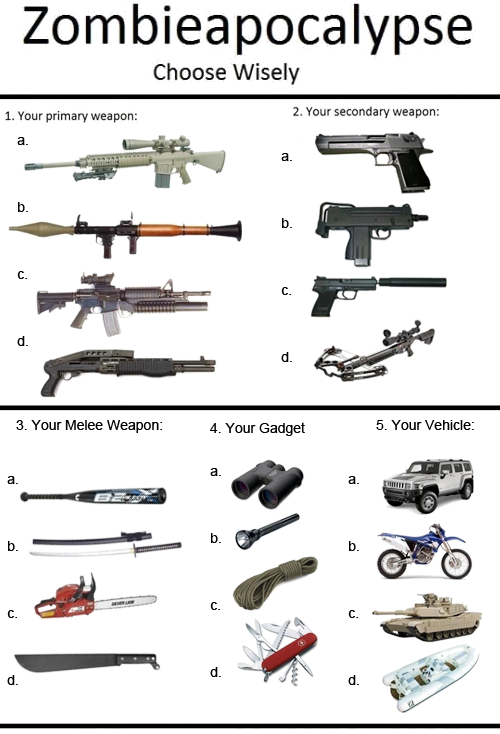 1. I’d have to go with C. While a shotty and an RPG would be amazing, they have their drawbacks. With a shotty you have to be super close to your enemy — I’m talking ZOMG-you-are-one-bite-away-from-tearing-off-my-face-close — and with an RPG…well, I would hate to have to reload that thing in a pinch. “OHAI zombies, just wait while I load this ol’ rocket…” Whereas with something auto or semi-auto it’s like, BLAP BLAP BLAP! Perfect for medium to short distance shooting. And it’s amazeballs if you need to blow out some kneecaps.

2. Ew. Crossbows are awesome, but like…no thanks. Again, I’d hate to have to ask the zombies to wait for me while I yank an arrow out of their buddy’s eye socket — although, if things were to go smoothly with the crossbow ammo wouldn’t be as much as a problem as my number one choice, C. Hello, silenced pistol. You will be perfect for shooting something in the back of the head or for shooting off locks and whatnot.

3. HMMMMMMMMM. Okay, as cool as a baseball bat would be I’d be rather screwed if that thing acquired an unfortunate dent. And plus I don’t think a baseball bat could, you know, penetrate a zombie’s brain with ease. You’d have to bash the SHIT out of it. A chainsaw is far too noisy and requires this substance called gasoline, not to mention the HIGH potential for blood splatter all of your face. I’d have to go with B. I could be a ninja and slice dem bitches’ heads off. Like Michonne. She’s my hero.

4. ::rubs non-existent beard:: Binoculars could be handy when you’re trying to determine whether or not a figure in the distance is friend or foe, and a flashlight WOULD be extremely useful for those dark nights…and rope…nah. I’ve never been much of a climber so even attempting to use one would practically be suicide (although it could be used for tying doors shut and whatnot). I’d have to go with D, even though I don’t know what half of those things do. BUT I WOULD FIGURE IT OUT. A zombie apocalypse forces you to learn these things.

5. While B would be mobile and agile, it would, uh, also be this thing called SUICIDE. Now, a tank would be awesome but I feel like you would be limited in where you could go (couldn’t traverse alleyways, fragile mountain roads, etc.) not to mention you would draw a FUCKTON of attention. And a watercraft…well, assuming zombies can’t swim, maybe you could find a remote island somewhere and call it your home. But, like, if something were to go wrong with it WHILE you’re on the island you’d have no means to access mainland. (Ah, starvation on a remote island — what a life.) But if you go with A you’re presented with a pretty universal means of travel, and if something were to go wrong you could always try and find another motor vehicle. But like I said, if you’re stranded on an island and your watercraft goes tits-up…yeah. It wouldn’t be pretty.

NOW TELL ME YOUR CHOICES SO WE CAN DISCUSS THIS FURTHER BECAUSE I LIVE FOR THIS TYPE OF CONVERSATION.