Y’know when you have a dream that feels so incredibly real that it causes you to wake up full of roid-rage? Or Forever Alone-ness? Or SQUEE!-ness? Of course you know what that’s like, sillyhead. This is just a rhetorical question I’m using to open up this post because I couldn’t think of a more creative and wittier way to do so.

Now, I recently had one of these dreams. Not only did I wake up super stressed out, but I continued to think about this dream ALL day yesterday. It friggen’ haunted me piss out of me. Have you ever been so haunted that your piss, like, comes out of your body? It’s not a good thing. (Also, I took that too far.)

The dream is as follows: I walked into my woman cave to admire my wares, but there was a slight problem:

Half of my ish was missing.

Like, gone. I looked to my left, and the shelves on my first mini bookcase were empty. I looked in front of me and my Uncharted 2 Fortune Hunter Edition was also missing.

You guys, it felt like an Onyx was sitting in my gut (fun fact: instead of gut I accidentally typed “butt” at first. LULZ). Like, the feeling of “OSHIT” was overwhelming, and that was the worst part of it; THAT FEELING.

I ran into my living room to see if anything else was missing and I noticed the front door was open. As I approached the door, this stupid hairy dude dressed in all black – obviously the robber going in for round two of woman cave steal-ation– was approaching. He saw me and immediately started running down the stairs into the parking lot. I chased after him, somehow managed to whip out a cell phone, and called the cops. Before homeboy sped away I was able to read off his license plates to the dispatcher (for some reason the front and back plates were different) and instead of getting in my car and chasing that bastard down like I would have IRL, I slumped back to my apartment. But for serious. If this happened IRL I would have ran that mudda’fugga DOWWWWN.

The next thing I know I’m in my living room and freakin’ detective Scott Shelby from Heavy Rain waddled in — he told me that they tracked down the robber’s house, but all they could find is a “three-edged dagger-like object”. I felt a flood of relief – at least my Phurba Dagger was safe! But then that flood of relief was Falcon Punch’d out the window because I remembered all of my other things were still, you know, missing. 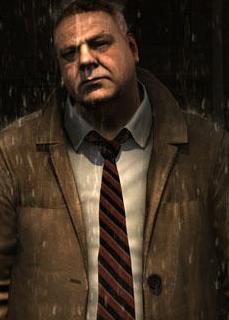 AND THEN I WOKE UP.

All day during work I kept having pangs of Onyx in my gut and could clearly recollect the look on Shelby’s face as he told me they had found my Phurba Dagger. All I wanted to do was rush home and, like, lock everything to the floor in massive locks and chains.

Needless to say I spent a lot of time in my woman cave last night.

….don’t say anything. I know that sounded terrible.