HAS IT REALLY BEEN SIX DAYS SINCE I LAST UPLOADED ANYTHING? ;____;

That’s awful, you guys. Don’t ever let me go that long again. Hell, if I go three days without putting something on this silly site of mine I want you to sick the e-police on my ass and have them torture me by showing me Alistair and another woman at it. TEACH ME A LESSON.

I suppose I shouldn’t be too hard on myself, though, as things have been nothing sort of holy-fucking-shit-this-is-craziness around Britt ‘hood. Between console launches, family gatherings, etc, I’ve also been, uh, packing and moving.

And THIS is when people become confused, and rightly so, because I did a shitty job at explaining my whole moving fiasco, and rightly so.  ARE YOU CONFUSED YET?

So, my Woman Cave was born and erected in my old apartment. My old apartment was a good sized two bedroom dwelling, and I highly enjoyed thriving within its walls. However, I wanted to be in downtown Seattle because that’s where all of the cool kids are, so I decided to take a leap of faith and move to the heart of the city.

Great. But the problem was (and still sort of is) that my downtown Seattle pad, while new and shiny and bug-free (which cannot be said about my old place) is a bit smaller in terms of space. Therefore during the past few months I’ve slowly moved the essentials from my old place to my new place. Think of my old place as an expensive storage unit. That being said, I was getting a killer deal for the apartment itself — are you ready for it — $600/mo for a two bedroom. YEAH. (And I didn’t have to suck on any genitalia to get it!)

And while I consider my woman cave to be an essential part of my life, the truth was I had to leave it untouched until I had an entire weekend to dedicate to packing/moving/transferring it to my new place.

In short, since mid-June my woman cave has stood miles away, untouched and alone. /cue dramatic music

And that’s why I was kind of secret squirrel about the whole thing. I trust all of you and know all of you are nice, kind-hearted people who would never steal from a hoarder, but I didn’t want the meanies of the world to know my entire video game collection was essentially sitting in an abandoned apartment. THE THOUGHT ALONE MAKES MY BUTTHOLE PUCKER.

But this past weekend was a weekend dedicated to packing and moving my woman cave, and that’s exactly what I did. Sure, I can barely walk today and my arms feel like they’re going to fall off, but hey, I made it happen. (With the help of some lovely people, I might add. YOU GUYS ARE THE BEST.)

PLEASE, HELP. HOW HAVE I ACCUMULATED SO MUCH STUFF. HOW. H-O-W. 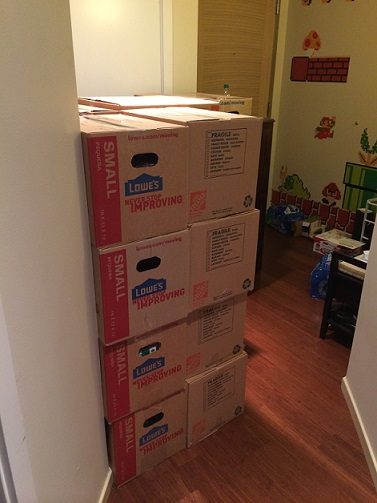 Thankfully I was able to find a nearby storage unit for the boxes that don’t quite fit. YET. I’m pretty sure as soon as I start unboxing stuff that will end up shelves I’ll have more room. Or something. Is that how this works?

I, uh…I think I’m going to start with my games. Yeah. I’m going to log every game into Excel so I know exactly what I own and, erm, how many copies of said game I own.

Thankfully, before tearing the woman cave’s walls down (GIGGITY) I recorded a tour. By myself. On my iPhone. Because I are professional. Look for it in ten years.