Okay, before you get all excited about winning a Sega Game Gear, my friends, I gotta keep it real with you. This is a Sega Game Gear I found at a garage sale, and unfortunately it had been neglected for some time. But perhaps one of you want to take it in; take care of it and show it the life it never had. (Or, well, maybe it once had an awesome life until a fancier model came along. Then it was disregarded; thrown into a box never to be used again. Sad.) 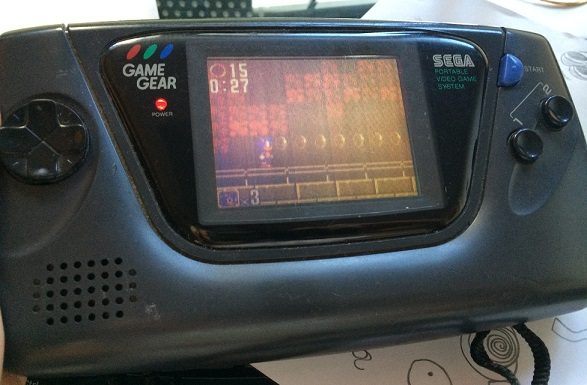 So, the first thing is that the unit itself is filthy. No big deal, that can be cleaned. The second is that while the sound works, it’s probably only at half of the loudness it once was. It’s still definitely audible, just kind of muffled. Now, the biggest issue with the Game Gear is the screen. You can’t really tell above, but I have the unit tilted at about 45 degrees, because if you look at the screen head-on… 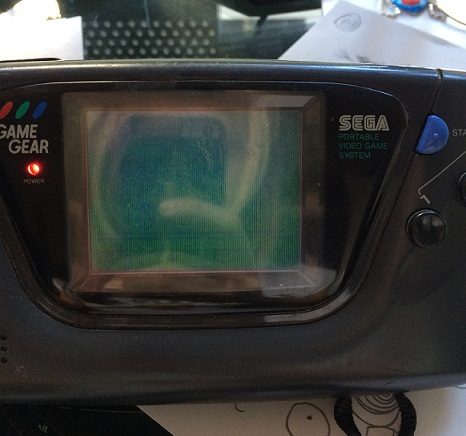 …this is what you see. I dunno WTF is up with the screen, but it’s fucked up. Again,  you can tilt it and the game is visible. The brightness dial doesn’t fix this problem.

Another driving point is while the screen is visible while looking at the console from an angle, details aren’t super clear and it’s a bit difficult to see what’s happening. Then again I demoed this Game Gear with Sonic The Hedgehog 2, a very fast-paced side scroller. Maybe with a slower game it wouldn’t be as hindering. I’ll also throw in Sonic 2.

I mean, I was just going to throw it away but I figured someone would want it, if for nothing more than to put it on a shelf or try to fix it. And hey, you get a copy of Sonic 2! Soooo if you’re interested, enter below.

Update: OH HEY! This made me feel a little better. She also supplied a link directing us to a how-to guide. SHE’S THE BEST.

@BlondeNerd Not entering, but sweet giveaway. Believe it or not, the screen is a fairly easy fix and can actually be updated to LED. :)