I had been eyeing Guild Wars 2 since its launch in late 2012. I remember thinking the MMORPG always looked fun, but after becoming all too familiar with “the grind” that plagues almost every MMO I’ve played, I assumed Guild Wars 2 wasn’t much different, that it couldn’t be much different, and wrote it off.

But as the years went on I found it hard to ignore your enthusiastic cries of, “HEY BRITT YOU SHOULD TOTALLY PLAY THIS.” And, well, you finally got to me. About a month ago I found myself with not only a copy of Guild Wars 2, but with a free weekend and some spare HDMI cables. Do you know what this translates to? 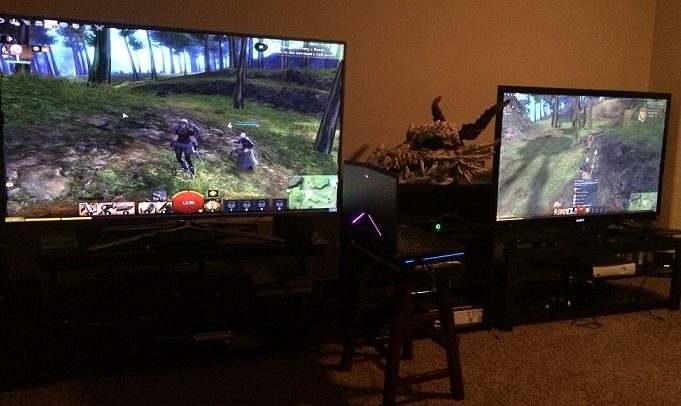 This translates to yours truly spending an entire weekend eating frozen meals, drinking adult beverages and playing Guild Wars 2. And I’ve been hooked on the game ever since.

This goes without saying, but I’m still a newbie. I only just hit level 35 last night (the cap is 80) sooo while I’m still learning the ins and outs, I know this much already: Guild Wars 2 is much more dynamic than any MMO I’ve ever come across. If I were to go into every detail about what make Guild Wars 2 a freakin’ blast to play we’d be here for days. (And ain’t nobody got time for that.) Instead, I’m going to list some of my favorite aspects.

That “grind” I’ve, and many others, have grown to know and well, un-love? It’s, like, non-existent in Guild Wars 2. “Defeat 15 Raptors!” and “Collect 10 bushels of corn!” are NOT things you’ll come across while playing. Instead, quests are dynamic and almost always feature several different ways to fulfill their requirements. 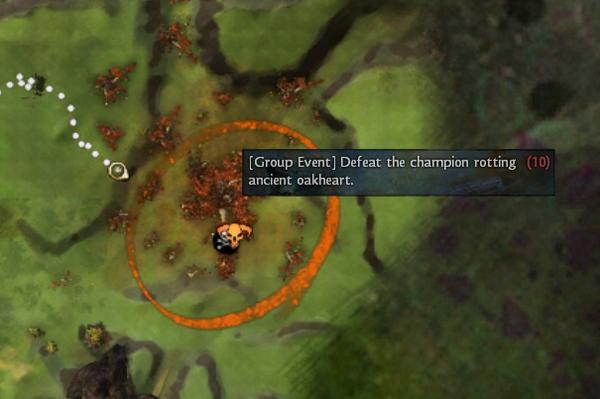 Events are…well, events, that are not only varied, but challenging. Let’s say you’re wandering through an area and a “New Event Nearby!” indicator pops up on your map. You can ignore it, or if you’re feeling frisky, make your way to the event marker. More likely than not you’ll find yourself working with several, sometimes countless, players to complete a goal. Sometimes the goal is to protect an NPC, sometimes it’s to find and collect specific items, and other times there’s a massive, epic boss that needs taking down. You never know what you’re going to get.

Balancing the difficultly in any MMO can be tricky. I’m not referring to Guild Wars 2 in this example, but this is what I mean: If you’re a level 17 character and you tend to stick to an area made for those between the levels of 15-20, you’re likely going to breeze through everything. On the flipside, if you want a challenge and head to the level 20-25 area, chances are you’re going to have a baaaad time, die miserably, and last but a few minutes before teleporting to the nearest town with your tail between your legs. It sucks, but I’ve played many MMOs that severely (perhaps unintentionally?) punish players for trying to puff out their chests a bit.

But challenge keeps things interesting, especially when playing with others. Thankfully Guild Wars 2 does an excellent job at providing an accessible challenge, should you desire one. I generally quest with a friend or two, and we try to play in areas that feature enemies and challenges a few levels higher than our characters. These areas are difficult, absolutely, but nowhere near impossible if you know how to play your character’s skills.

Okay, this is saying a LOT coming from me. (In a past life I’m pretty sure my name was “Brittney HatesPvP Brombacher.”) PvP causes me anxiety. It causes me to get sweaty palm syndrome. I. Just. Don’t. Like. It. But, while hanging out at ArenaNet last week for a Heart of Thorns event (more on that in a bit!), I had the chance to go hands-on with the upcoming PvP mode, Stronghold.

In Stronghold, you and your four teammates try to kill your enemy’s Lord. Each team has a stronghold, each team’s Lord is tucked away in their respective stronghold, and each team has a “highway” to get there. To get to your enemy’s lord, there are two defensive gates that must be destroyed. This can be done by recruiting NPC allies, named “Doorbreakers” and “Archers.” (Players cannot damage the gates.) Once you deploy Doorbreakers and Archers, you’ll need to protect them, as the highway is also riddled with enemy NPCs who want nothing more than to make your life difficult by defeating your only means to gate breakage. (Not to mention enemy players will target your allies as well, and when they do, they’re much tougher to bring down.) But as soon as the final, inner gate has been destroyed, the Lord – and several of his minions – are yours for the slaughtering.

I really had a great time playing with my team, especially because NONE of us were PvP players. Would you believe me if I told you we won a match against another team? Because it totally happened. (+6 ego.)

I’m blown away by the Guild Wars 2 community. I’m not exaggerating when I say I have yet to read a douchey comment in the chat. Other players are so helpful at answering questions, giving advice, assisting in tough combat situations and reviving those who have ran out of health. It truly creates an inviting atmosphere and for this reason alone I would recommend Guild Wars 2 to anyone who’s interested. 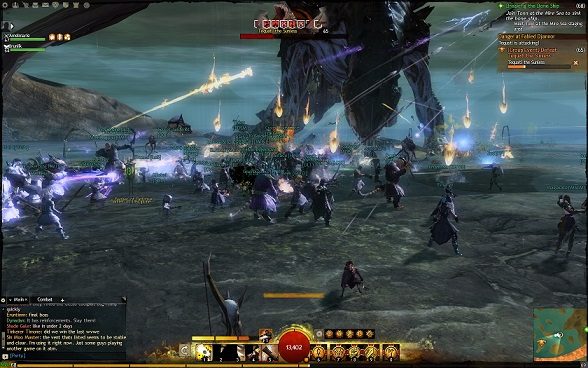 This rad, online community extends farther than just the game. When I attended the Guild Wars 2: Heart of Thorns event last week in Bellevue, WA I was a bit nervous, as I knew I didn’t know much about the game. Hell, I had only been playing for a month. I was worried I wouldn’t know enough to participate in conversations, that I wouldn’t be able to keep up, and that I would look like a freeloader. (For the record, I was very transparent with ArenaNet about my experience with Guild Wars 2 and they were more than welcoming. Turns out they appreciate my noobish perspective! ;D)

All of that worrying was for naught, as my fellow media brethren were MORE than willing to help. When they spoke about Guild Wars 2 — when they answered my questions – I could tell they were excited to stuff my brain with knowledge. You seriously would have thought these were the developers! In short, everyone I came across at the event, media and developers alike, were so freakin’ nice, accommodating and GAH I had such a great time.

I know most folks familiar with Guild Wars 2 are extremely excited for the upcoming expansion, Heart of Thorns. This expansion introduces the earlier mentioned PvP mode, Stronghold, a new zone, a “Masteries” leveling system, a Revenant class, and more. Unfortunately, because my experience in Guild Wars 2 is so limited, I don’t think I’m the best equipped to go into detail about all of these. I mean, I would love to tell you how much more amazing the badass-looking level 80 Revenant class was (and it did look badass), but the only character I could compare it to would be my level 30 Guardian.

The Masteries system, a new progression system available to level 80 characters, is another thing I know a BUTTLOAD of people are excited for, but again, I don’t quite understand the significance and impact, as I’m still learning the basic “Skills” and “Traits” system. Below is a good look into the system by Bog Ottter. (We were on the same PvP team!)

Destructoid, who was also in attendance, has a great feature that goes into detail about the new shinies coming to Guild Wars 2 as well.

But yeah, friends. Guild Wars 2 is a fantastic way to spend some free time. It’s engaging, dynamic, there are TONS of things to do and it’s a blast to play with friends. I love that while it feels like an MMO, it also feels like a polished game, y’know? It doesn’t have that overabundance of “grind” and “collect” that can define an MMO.

Have you played Guild Wars 2? What are your thoughts?