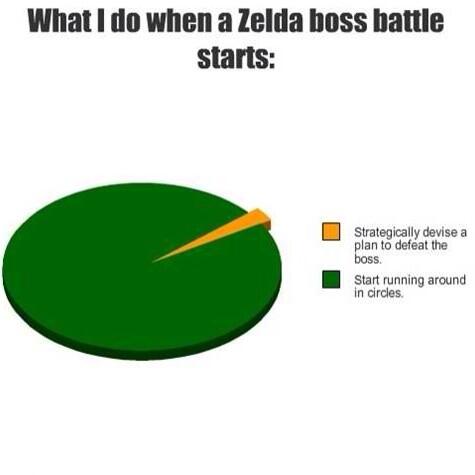 YES! God, YES. Let’s talk about this for a minute, shall we?

First, this doesn’t apply to only Zelda games. Whenever a boss battle starts I ALWAYS assume the defensive position, which generally consists of running around like an erratic chicken in motions that can barely be described as circles. I mean, shit, nine times out of ten it’s NEVER going to be as simple as whacking the boss. Oh no. First, you’ll likely have to dodge a billion and a half tentacles or missiles or SOMETHING. Then the sweet spot, the holy grail, the area in which you thrust your sword or magical powers, will be revealed. Generally it’s an eye, head, hell, sometimes it’s the ass. And it’s not like the boss is just gonna let you waltz up to to and poke its butt, either. YOU MUST LEARN PATTERNS! YOU MUST LEARN HOW TO EVADE ITS ATTACKS!  So, why subject yourself to taking unnecessary damage when you can observe it whilst being safe and, erm, running in circles? Walking up to a boss and attempting to whack it is like walking up to a stranger and screaming “BUTTSEX!” because it worked on your best friend.

Okay. That was a terrible analogy.