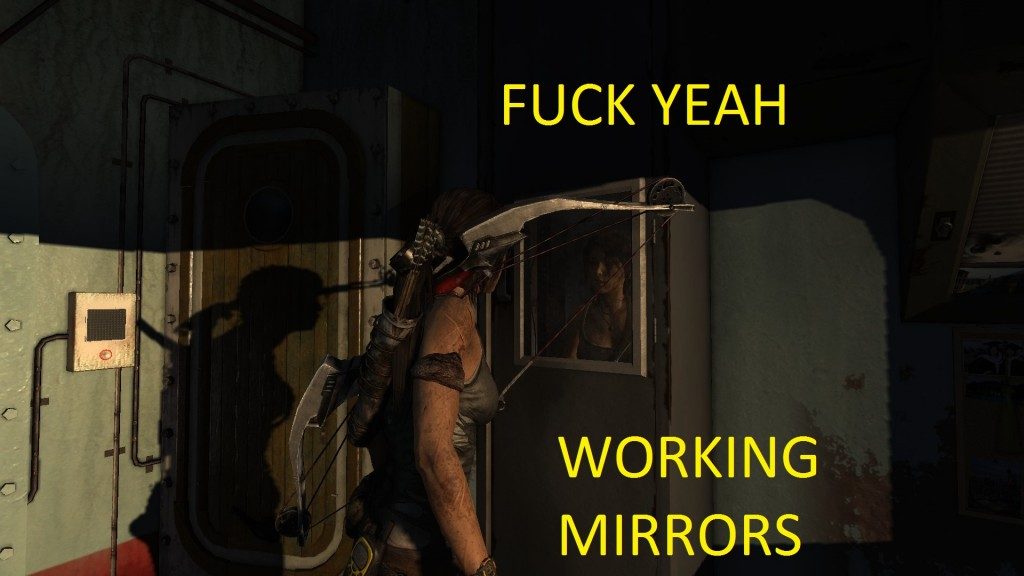 The above photo was attached to a post on reddit titled “Well, this settles it. The new Tomb Raider is the best game ever created.”

I’ve been playing Tomb Raider (45% finished) and while I can’t agree Tomb Raider is the best game ever created (although it’s damn good) I do agree it deserves mad effin’ props for having WORKING MIRRORS. ::blows horns and throws confetti:: And admittedly, this post started out as a tribute to in-game mirrors, but before I knew it was I going on a tirade about the little things in video games that irk me.

Below are the main things I check for. If they’re not done correctly I getz an irritation.

1) Working mirrors. If I glance or walk by  a mirror I expect to see my character’s reflection all up in its grill. If, instead, I’m faced with a milky silver reflection of nothingness I become insta-irritated. Like, I’m not a video game developer but I can’t imagine it would be super inconvenient to implement  that feature. And for the love of GOD do NOT make every mirror broken in the game. That ‘s a cheap way out! (I’m talking to you, Resident Evil 6!) 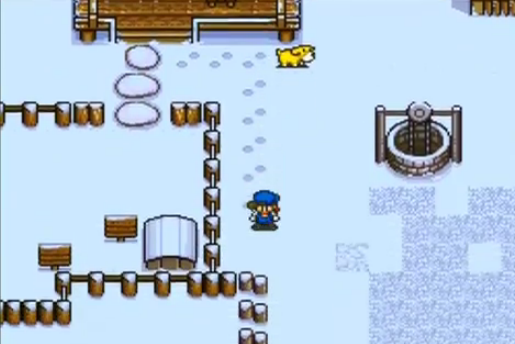 2) Snow tracks. If my character is trompin’ around in the powdery white stuff I always ensure they’re leaving tracks behind. Granted this hardly is an issue anymore (especially with current-gen engines and whatnot) but there are NO excuses for a lack of tracks — hell, SNES Harvest Moon even had ’em! What’s more: I always observe the tracks and see how long they last. Preferably they should start out dark grey and gradually fade to light grey and then white. DON’T JUDGE ME.

3) Getting wet. (HA.) As technology improves, water textures and overall rendering are becoming sexier and sexier. That being said, if I take a plunge in the wet stuff (Double HA!) I don’t expect my character to emerge out of the water all Godzilla like but step on land bone-dry. I mean, c’mon dudebros — I just submerged homeboy/homegirl in water but there’s not a part of them that’s dripping? BWUUUH? 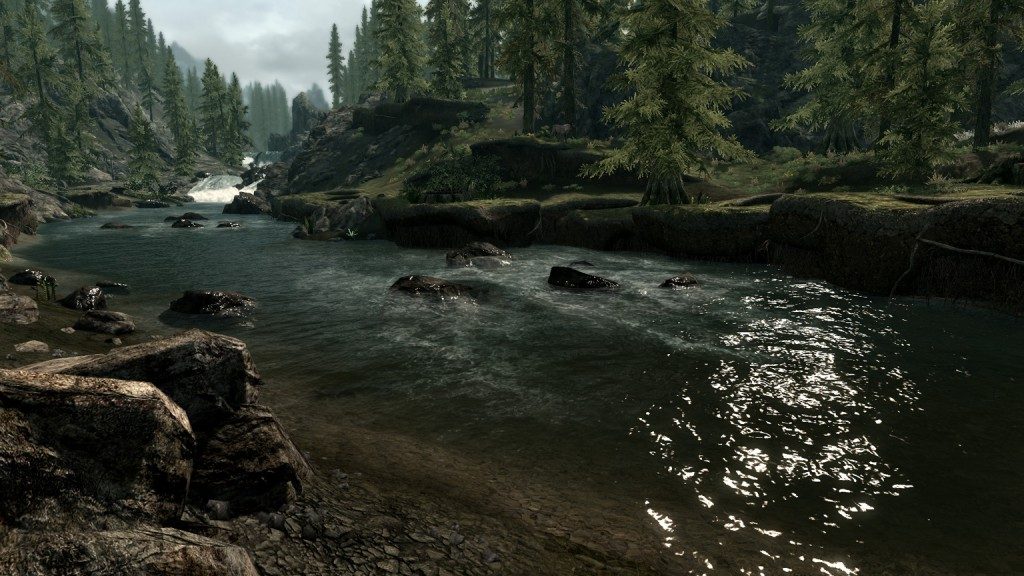 4) Water. Speaking of getting wet (Triple HA…? Someday I’ll grow up), water textures are probably the main thing I look for in a open-world actiony-adventury whatetever-whatever title. in fact I’ve been paying extra attention to the wetness (pfft) ever since I can remember. Seriously, if I find an amazing stream, lake, river, ocean, etc. I’ll stop playing and just…study it. I’ll look for ripples, waves, sun reflections, everything. It’s SO soothing! Needless to say half of my hours spent in Skyrim consisted of staring at freakin’ water…

Now that I’ve told you what I’m always looking for, tell me what you always look for!  Are you a water-nut too? Texture-nut? A nut-nut? :D