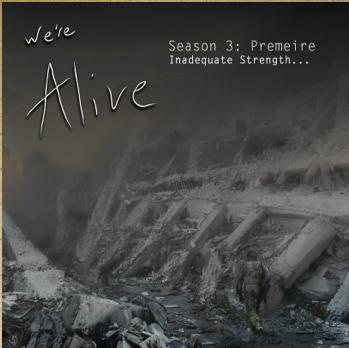 Ssshhhh, do you hear that? That’s the collective sound of a helluva lot of zombie fans squealing like I did at my first Backstreet Boys concert. (Oh, the emotions…)

Since We’re Alive wrapped up its second season in July, I’ve been feeling like something has been missing from my life…oh, that’s right. It’s the hours and hours of podcast prep and editing for the We’re Not Dead podcast! ;D Just kidding. The truth is I’ve sincerely missed the story and characters of We’re Alive. My Mondays now suck. Instead of listening to an emotionally gripping 15-20 minute segment of awesomeness, I get awkward massages for a car accident I was in. Nope. Not nearly as cool.

This upcoming season of We’re Alive could be jam-packed with more drama than a season of Real Housewives of Beverly Hills. Seasons one and two allowed listeners to attach to and build emotional connections to the characters, and in season three we’re going to see those same characters we’ve grown to love (or hate!) thrown into situations unlike any they’ve ever been in before. EEEEE. The thought of it alone makes my girly parts tingle.

And of course, like I briefly mentioned above, this means We’re Not Dead will be kicking off into full gear as well. Hopefully We’re Not Dead will be able to run more exciting contests this season, as well as hold live episodes via BlogTalkRadio–and for the love of God–I hope we get to do another live show in California!!!!

Over the course of the seasonal break I’ve taken on a few more projects and added a lot more to my plate, so it’ll be challenging to fit the allotted 10-15 or so hours in for prep, editing, distribution, etc. But it’s exciting. I love being busy and having things to do, so I say BRANG IT AWN!