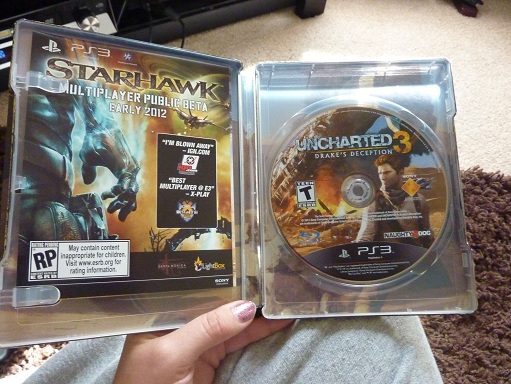 Yeah, yeah. It took me eight months but I *FINALLY* opened Uncharted 3! I have to say, the Collector’s Edition looks a lot better out of the box than it does inside of it. Crazy, right?!

Our story with the oh-so-studly Nate Drake (who I WILL reproduce with someday) and his partner-in-crime Sully begins with them making a supposed trade of Nate’s ring (aka his necklace) for a LOT of money. I mean, a lot. I think I came when I saw all of that money. What type of currency it was means naught. All I saw were bundles of videogames disguised as cash. Anywho, they met up with this homeboy named Talbot. Talbot examined Nate’s ring and determined it was the real deal, but Nate and Sully “discover” that the money was fake. BAD NEWS BEARS.

A huge-ass fight ensued, after which Nate and Sully, despite getting their asses kicked by at least 12 men, manage to walk out. Well that’s all great and shit HOWEVER there were more duders waiting for them in an alley —  including Charlie Cutter, Talbot’s cohort. And even though Nate and Sully managed to fend off aforementioned at least 12 men, the four guys in the alley easily took them out. While Nate and Sully were down and writhing in pain, an old homegirl drove up — I think Sully called her Kate — and snatched Nate’s ring off his neck, claiming it was hers and all of that jazz. Nate tried to stop her from getting away, but Charlie cockblocked that idea by shooting Nate AND Sully, and this actually appeared to piss Kate off! Then of course she drove away. YEAH. THANKS FOR TRULY CARING.

While they were bathing in their own blood (I’m so dramatic), the story flashed back 20 years earlier to Cartagena, Colombia, where I took control over a jail-bait Nate Drake. 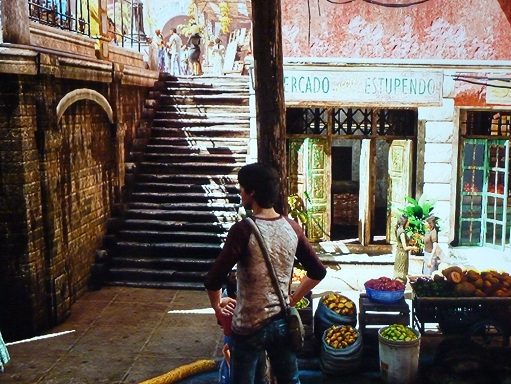 14-year-old Nate was in search of Sir Francis’ ring. (Um, is that typical? Is that what all teenagers do? Wander to foreign countries to search for old shit?) He eventually found it in a museum, but soon discovered it was, you know, locked away in a glass case. As he stepped away Mr. Studly-20-Years-Younger-Victor Sullivan himself waltzed in. He too tried to get the ring as Nate watched from afar.  Unfortunately the key didn’t work and he casually stepped away. The museum guards saw Drake being all sneaky squirrel and tossed him out of the museum.

But Nate waited for Sully to leave the museum and then proceeded to stalk him. He eventually saw Sully given a key that was guaranteed to open the display. This meant Nate must stalk Sully even harder throughout Cartagena until a prime opportunity to pickpocket him presented itself. 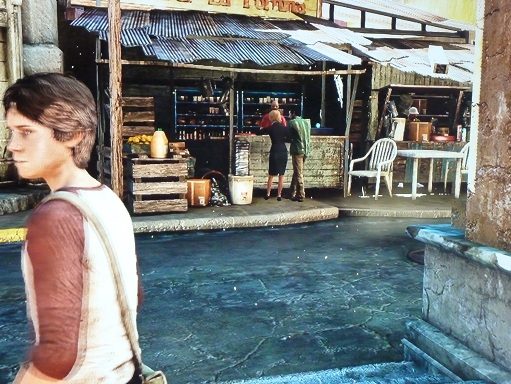 Nate eventually spots Sully and Katherine chillin’ by a merchants tent and decides that THAT is the prime time to steal Sully’s shit. He stole his shit. But because Sully wasn’t quite an old fart yet he caught onto Nate’s shenanigans and not only confronted him, but critiqued him on his pickpocketing skill as well. 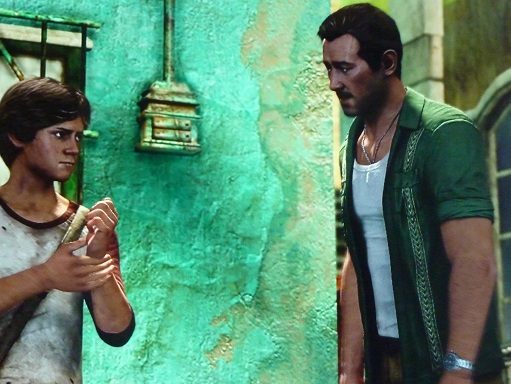 After some bickering, Nate finally handed Sully the wallet BUUUT Nate had been a sneaky squirrel and kept the key to the museum case. COME ON SULLY! WTFBBQ. Who didn’t see that happen? I mean, if a kid reached into my butt and pulled out my shit I would make sure my shit was still where it belonged, nahming? 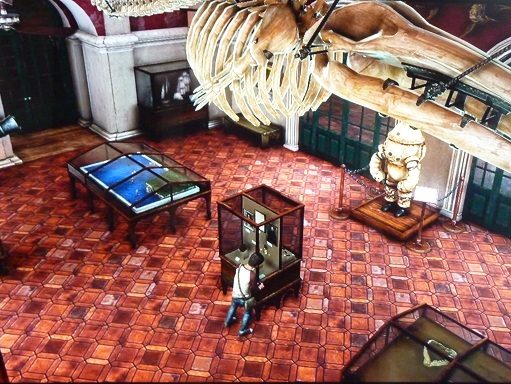 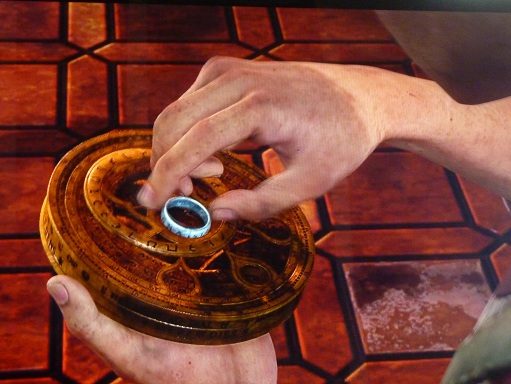 What would an Uncharted game be without the chase scenes?  Getting busted in the museum lead to an EPIC chase, which resulted in young Nate successfully evading 92,394 men via rooftops and buildings and such. At some point Sully began helping Nate, roughing around with the men trying to kill him. Sully, you are a stud. <3. Eventually, though, Nate’s shit got weak and he found himself face-to-face with one of Kate’s men.

But Sully came to el rescue-o and shot said man in the back. 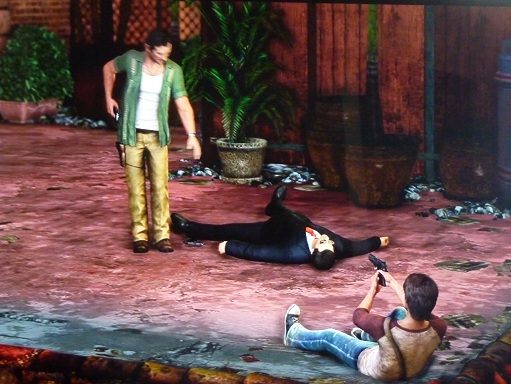 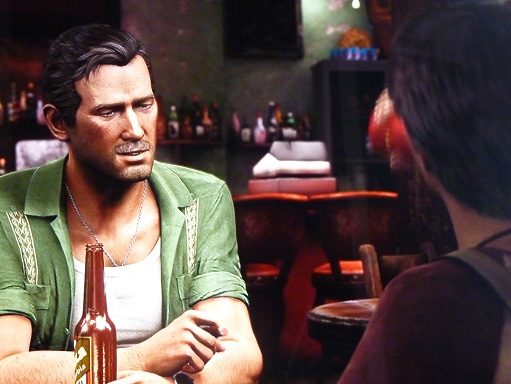 Afterward Sully and Nate nommed and drank and decided that they would be best friends. Well, not really. Nate was very apprehensive about becoming buddy-buddy with Sully, but I guess everything worked out JUST dandy for if you were to fast forward to present time — 20 years later — they were both shot and slumped against some trash in an alleyway. <3. Perfect. But, uh, it’s all good because Charlie– you know, the one who shot Nate and Sully – is actually a good guy, and the ring Kate stole, the one Nate was wearing around his neck, was fake. Oh, good. For a minute I was worried that the game would be over before it even started.

Nate, Sully and Charlie met up with CHLOE (<3), who had been keeping an eye out for the car Kate and her crew were in. She was able to track them to a building with a green door. Of course the door was locked, so Nate had to scale the building like a monkey to gain access. 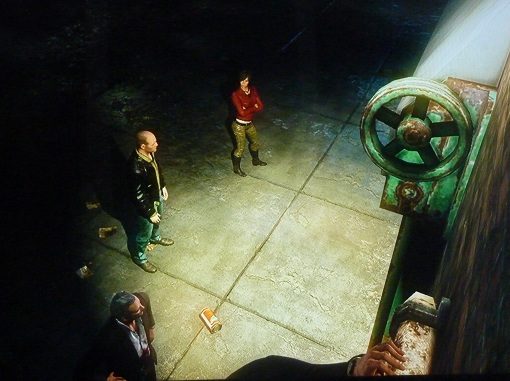 Once inside, it was discovered that the car was nowhere in sight, but upon further investigation tire tracks were found leading into a wall. A secret passageway was soon discovered, and the guys headed inside while Chloe left to wait in the car in case an emergency getaway was necessary. 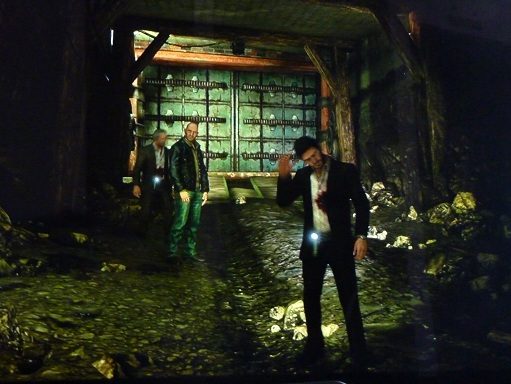 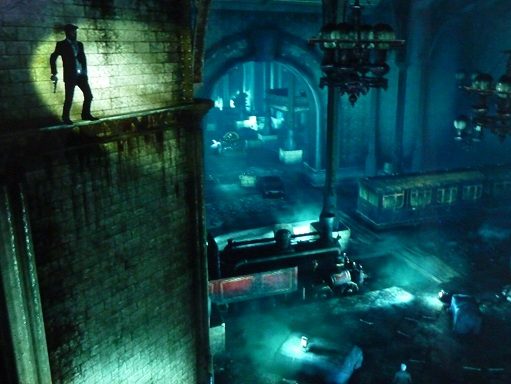 Kate’s car was found inside, as well as her, like, house. Or something. I think it more like an entire room dedicated to Sir Francis Drake’s belongings; it was HER version of a woman cave. But I dunno about this old hag – for being all fancy pants and whatnot it sure is strange that she chooses to dwell inside a tunnel. In any case we snuck up on her and her crew as they were gaga over Nate’s “ring”, as well as the same golden circular thingie Nate pulled out of the case 20 years ago. 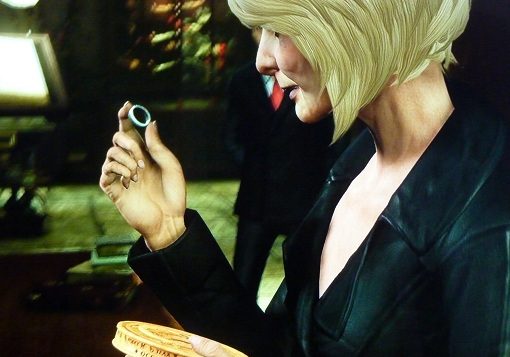 Needless to say, Katherine quickly figured out she was el duped-zor and immediately launched an all-out manhunt for Nate and Sully and left the room. She was dumb and also left everything on the table. And by “everything” I mean the aforementioned golden circular thingie. After putting the correct ring in the golden circular thingie, Nate figured out it was actually a decoder of sorts and that “it” told him to look for the Golden Hind, which conveniently was in the same room. 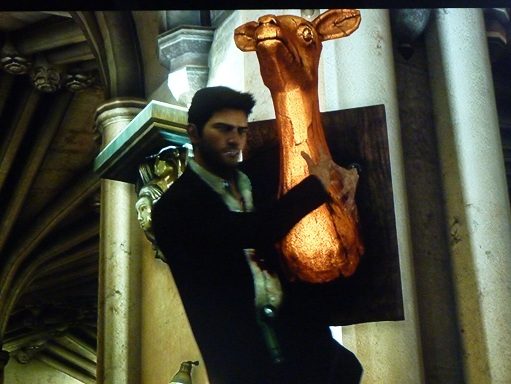 Inside the Hind was a map of Saudi Arabia, which is all well and good EXCEPT it triggered the entire tunnel to Nate, Sully and Charlie’s location. As usual, an epic firefight ensued but the trio was able to escape a la Chloe Frazer and her getaway vehicle.

The scene cut to the crew chillin, drinkin and being merry. Now, per the norm with Uncharted games, I kinda get confused with the plot. Nate is way too damn smart for his own good and loses me amongst his theories and brainwaves and whatnot. So, here is what happened next according to Wikipedia:

“…where they manage to retrieve T. E. Lawrence‘s notebook and a map showing Francis Drake’s secret voyage to Arabia [this is what was in the Golden Hind], where he was commissioned by Queen Elizabeth I to search for the lost city of Ubar which is only mentioned in the Quran. Using these items, Nate works out that clues to the city’s location lie in Crusader crypts in a French chateau and a Syrian citadel. Nate and Sully head to eastern France and locate the long-abandoned chateau in a dense forest.”

Anyway, yeah, Sully and Nate went to France and while I, the player, haven’t found EXACTLY what I’m looking for, Talbot’s men have ambushed Nate and Sully. Also, zombies. 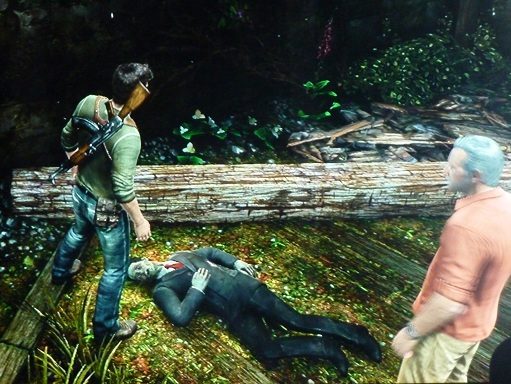 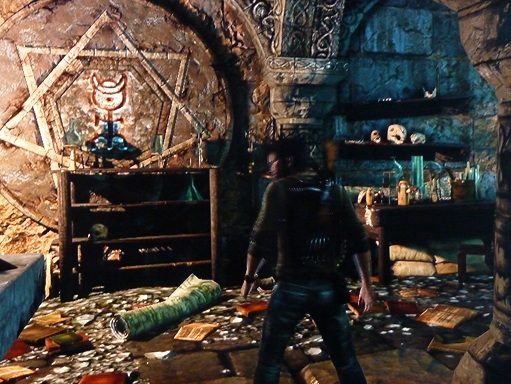