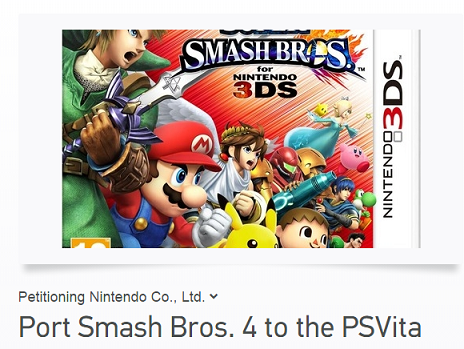 Apparently Smash Bros. for the 3DS has been renamed by the masses as Smash Bros. 4. That’s neat. Anyway, here’s a petition asking Nintendo to port Smash Bros. 4 to the Vita because that’s totally a possibility because of everything.

The description reads as:

“Nintendo NEEDS to port this game to the PSVita. Many of us Sony fans don’t want to buy an underpowered console like the Nintendo 3DS, but we would gladly buy a quality title like Smash Bros. Not only would it be benefical for both fans and Nintendo, but probably also REQUIRED by US anititrust law, since Nintendo has a monopoly on games like Smash Bros. by virtue of having no competing title.”

As of right now it currently has 365 supporters. I’m not sure if this is, like, a legit petition meaning these people think this an actual possibility, but nonetheless it’s worth checking out for the comments alone.