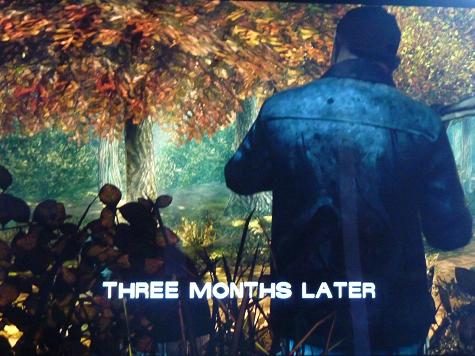 Episode three of The Walking Dead begins with Lee and new character Mark (who I freakin’ LOVED. Yes. Love with an “ed” at the end. Grrr…) frolicking in the woods. And by frolicking I mean they were desperately hunting for food because shit had gone downhill during the past three months — Lilly and Kenny are fighting like none other re: who is “in charge”, food has become so sparse it is now divvied up via a food lottery and Kenny is threatening to leave once he gets the RV up and running. THINGS ARE SWELL AT THE INN, FOLKS!

During Lee and Mark’s, uh, frolicking session they hear a blood curdling yell and find the source of said yell is Mr. Parker, a high school band director caught in a bear trap — oh, and he was with two students, Travis and Ben Paul. I mean, talk about shitty luck. It’s terrible enough to get caught in a bear trap, but to get caught in one during a zombie apocalypse? Hot damn. You just weren’t destined to make it, dude.

HOWEVER, Lee decided to give Mr. Band Director another chance at life, and while several zombies were slowly shuffling their way he chopped off Parker’s leg. Oh, yes, that was a lovely thing to experience. Gave me PTSD re: the end of Saw. 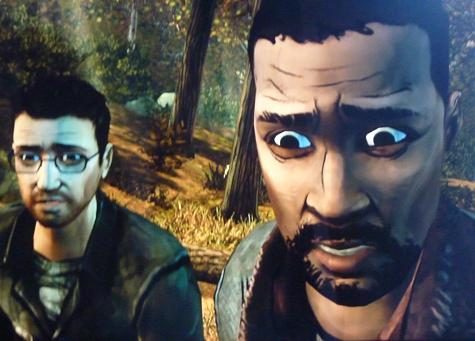 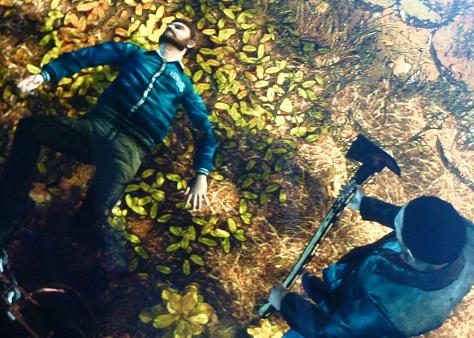 After leaving Travis AND Mr. Parker’s right foot in the bear trap we made haste to home sweet home. But, uh, no one received a warm welcome. Instead it turned into a bitch fest as to WHY we had to bring another mouth to feed and WHAT were we thinking and HOW are we going to take care of this guy and we NEED to send Ben Paul on his way and yadda yadda yadda. 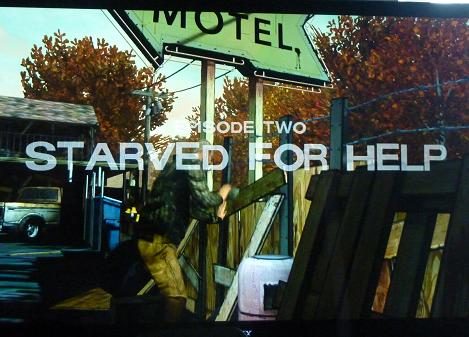 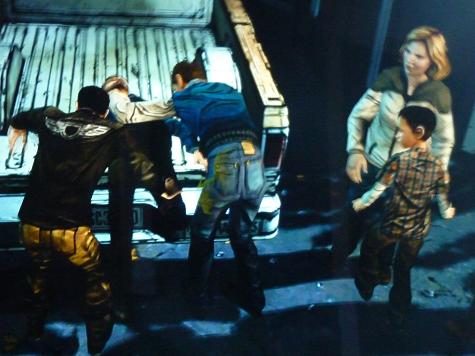 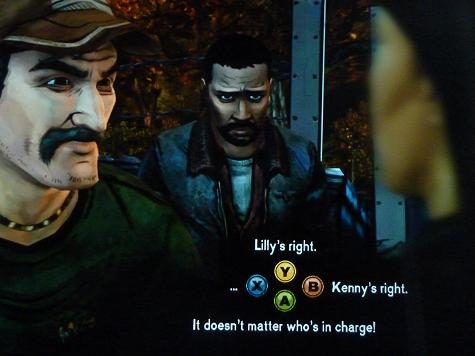 While Kat was trying to save ol’ Mister Band Teacher, Lilly bestowed upon Lee the grand duty of rationing out the food. Lee’s task, should he accept (and he did) was to give out four pieces of food to out to four people at the Inn. Did I mention there are, erm, ten people at the Inn? (I totally had to play favorites.)

After I gave out the noms (I didn’t even save any for Lee :/) Kat declared she wasn’t able to save Mr Band Teacher. Shortly thereafter he kinda, uh, reanimated as a zombie and tried to bite all of our faces off, but fortunately we were able to prevent that from becoming a thing that happened.  It was at this time that Ben dropped the ball:  YOU DON’T NEED TO GET BIT TO BECOME INFECTED! WE’RE ALL INFECTED! GYYYYYAAAAAAAAHHHHHHHHHH!!!! 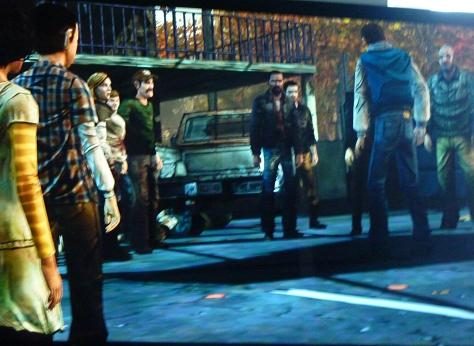 One of Doug’s booby trap indicator whatcha-ma-callits went off, alerting the Inn that a few random folk were approaching the Inn.

Those kids happened to be the St. John brothers — Andrew and Danny to be exact. Oooh, those guys…y’know, for it being a zombie apocalypse they had a substantial amount of “meat” on them. Hemhem. Anywho, these guys claimed to be out of gasoline and they offered to strike the Inn crew a deal — in exchange for gasoline they would offer food and other important things they out of. So, in order to verify that these dudes actually hailed from a Dairy Farm and could actually hold up their end of the bargain, Ben, Mark, Doug and Lee accompanied Danny and Andrew back to the farm. 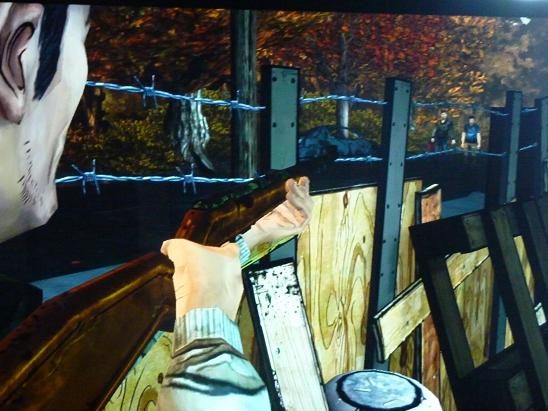 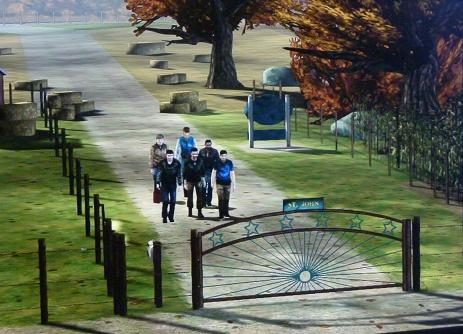 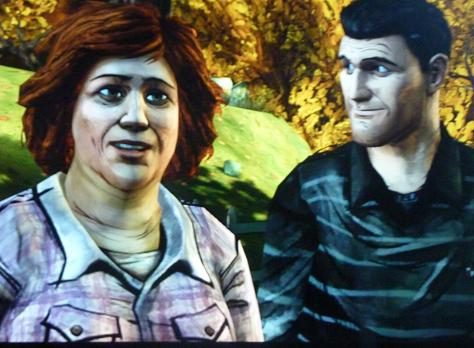 See that lovely woman? Her name is Brenda. She is actually not a lovely woman. She is a craaaaaazy mudda’trucker who seriously needs to get a grip on things. Also, bad hair dye is bad.

As we began to talk with the residents of St. John’s Dairy we learned that their one cow was sick or some shit. Doug was all like “DUDEBRO WE HAVE A VET!” so he and Ben left to grab the rest of the group. It was clear that everyone was trying to play their cards juuuuust write so maybe, JUST maybe, the Inn residents could move in with the Dairy folk. Oh, sure. That sounds just peachy. JUST FREAKING PEACHY. Anyway, while Doug and Ben were off fetching everyone, Lee and Mark were asked to patrol the perimeter, AKA the electric fence and remove any bodies that may be stuck on it. Apparently that was the Dairy’s main defense — an electric fence. I mean, sure, it will keep the zombies out (to a point) but, uh, what about smart people like REAL PEOPLE WITH BRAINS? Hmmmm. Bandits, perchance? /foreshadow 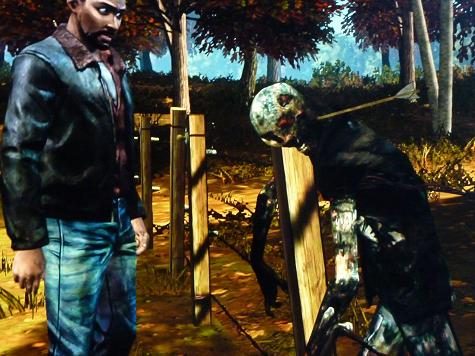 Did I mention something about bandits earlier? Because shortly after we began to remove the zombies along the fence freakin’ BANDITS began shooting at Mark and I! And one of them hit Mark! THOSE BASTARDS! Mark was still alive, but why is it that every character I have a “thing” with either dies or gets injured? I mean, friggen’ Alistair even died in my first play through of Dragon Age: Origins. Grrrr….

We somehow managed to escape and confronted those St. John bastards on their supposed “security”. 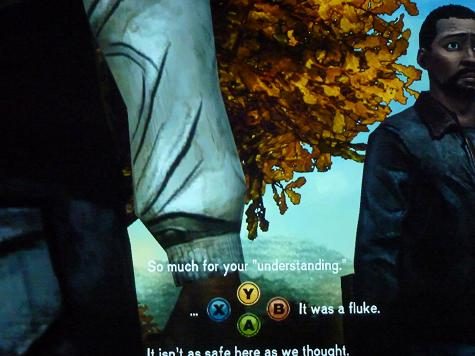 Meanwhile, Brenda took Mark inside to “treat” him. Yep. Treating him REAL good, she was. Yessiree.

Everyone had arrived at the Dairy by this time, and for SOME strange reason several of them were startled and turned off by the Dairy because Mark had been shot.  What weird logic, I can’t figure that one out…

Looking for revenge, Lee and Danny headed into the woods to seek out the Bandits’ camp. 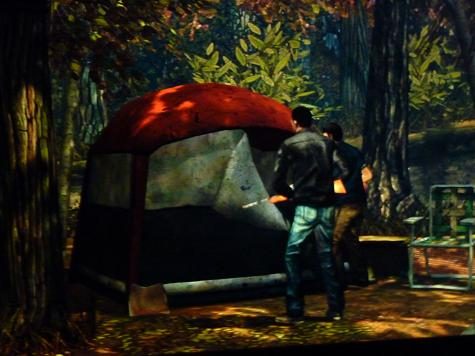