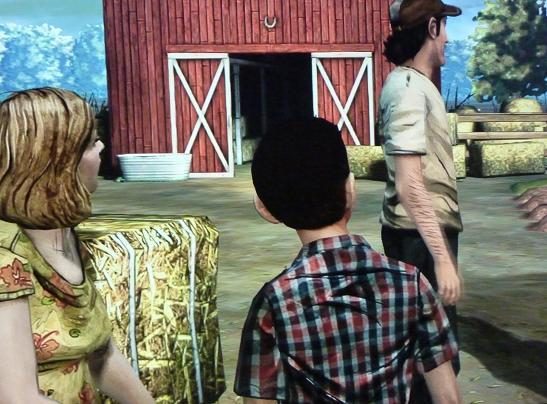 The next day I was woken up by Kenny, and quickly met his wife, Kat, and his son, Ducky. Or Duck. Either way Kenny said his intelligence was equivalent to that of a pile of bricks. FATHER OF THE YEAR, LADIES AND GENTLEMEN!

I made my way around the farm, socializing, getting to know people, y’know, being the nice “new” guy. But when I went over to visit Shawn, who was nailing the fence, and Ducky, who was fucking around on a tractor, I had to make a decision to save one or the other. You see, these things called zombies blindsided the both of them and I had to choose which person to save. I chose to save the kid (after all, this world needs more dumb people) and Shawn promptly was bitten and killed. YAY!

Hershel wasn’t very happy and promptly kicked all of us off of his farm. HEY, MAN. I read that no matter what Shawn was destined to die (ie; you can’t save him no matter what) SO YOU SHOULDN’T GET MAD AT ME.

We headed to Macon, Georgia. We got in a tight squeeze but were saved by a group of survivors who were, coincidentally, holing up in a drugstore that Lee’s parents owned. 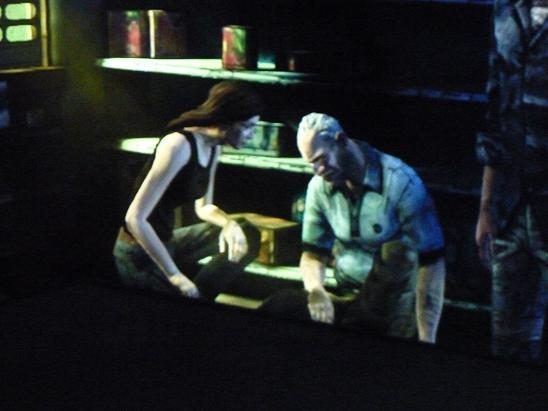 Lilly is the leader of the survivors, and her dad, Larry, is a douchenugget. In the earlier close call, Ducky was surrounded by zombies but wasn’t bitten. Larry wanted to kill him anyway, but I stood up for Ducky and made sure that THAT wasn’t a thing that happened. Larry has a heart condition and needs medication. 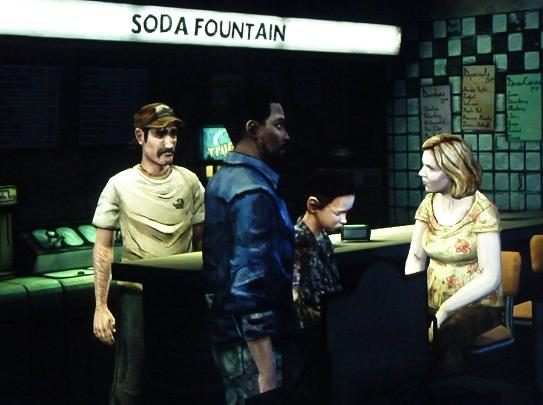 Ducky’s parents were happy that I prevented their son from being murdered. YAY. Or at least I think I did. I dunno if that was one of those “Shawn” circumstances aka he couldn’t die even if I wanted him to. 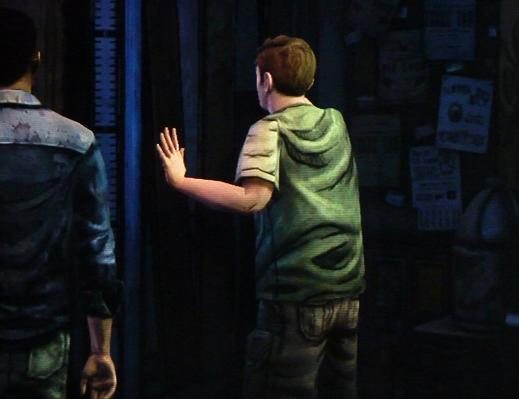 This guy is kinda dull. I mean, he’s really not that exciting. But he saved Carley so that counts as something! 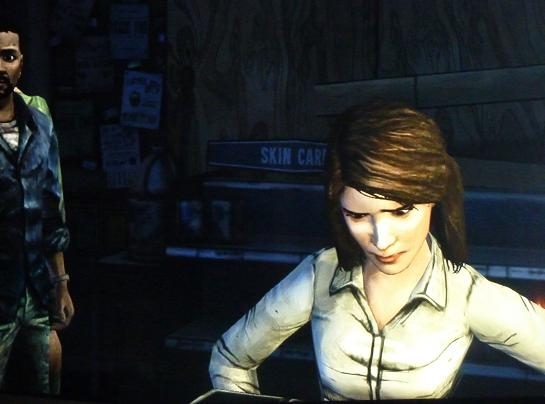 Oh, Carley. Well, she WAS a reporter and DID have a slight thing for Doug, but, uh, yeah. More on that later.

And of course there’s Clementine, who had to empty the contents of her bladder, which is all well and good and all but Lee, like a dumbarse, told her to grab the keys and open the LOCKED bathroom door by herself. Okay. If there’s a locked bathroom door and we’re in the middle of the zombie apocalypse you better believe I’m going to assume there’s a zombie inside. I’m NOT going to send a little spawn to figure that out for herself. Anyway, there was a close call but I saved her from THE ZOMBIE INSIDE THE BATHROOM. Yep. There was one in there. FIGURE THAT OUT.

Lee told Lilly he’d look for her father’s meds in the pharmacy, and in order to do that he had to go through the office. Of course the pharmacy door was locked and required a key NO one had, but inside the office Lee found a photo of his family. 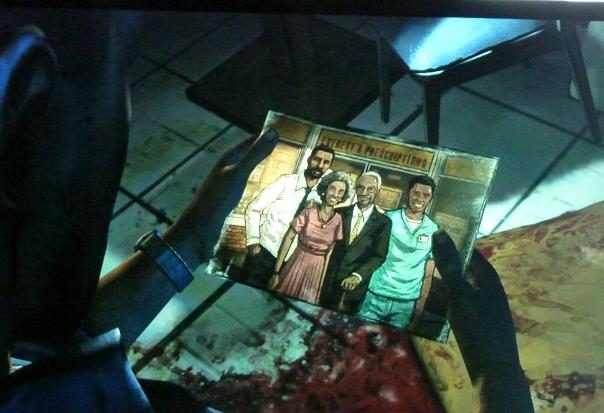 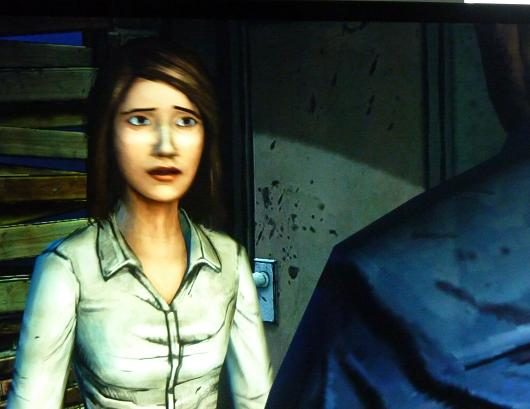 Carley, the reporter, entered the office and pretty much told Lee “OHAI I know you were going to prison because you murdered the man who was boinking your wife. But you seem like a good guy so I won’t rat on you unless you give me reason to.”

What’s even more awesome? Glen radioed in and told us that he was stuck and surrounded at a nearby motel. YAY! So off to the Motel Lee and Carley went (she WAS waswaswas the best shot) and we quickly found Glen hiding in a freezer. We were ready to peace back to the drugstore, buuuuut he told us there was a girl nearby, but she quickly locked herself in one of the motel’s rooms after meeting Glen.

Through some careful maneuvering we were able to put down the surrounding zombies and break into the motel room. Oh. This girl Glen was talking about? She had been bitten.

WHAT A WASTE OF FUCKING TIME. Damn you, Glen, and damn your penis! Lee gave the girl his gun and she asploded her brains out. It was an act of mercy, I promise.

The three of us headed back to the drugstore. Remember that photograph of Lee’s family? Well, the younger dude was Lee’s brother, and he happened to be chilling outside of the drugstore. And by “chilling” I mean he was a zombie crushed by fallen debris. Since the pharmacy door was locked, Lee figured his brother would have the keys they needed. Doug and Lee distracted the zombies (Doug was able to use a universal television remote to activate the TVs across the street) and Lee ran over to his brother, grabbed the keys and killed him. Uh, again. 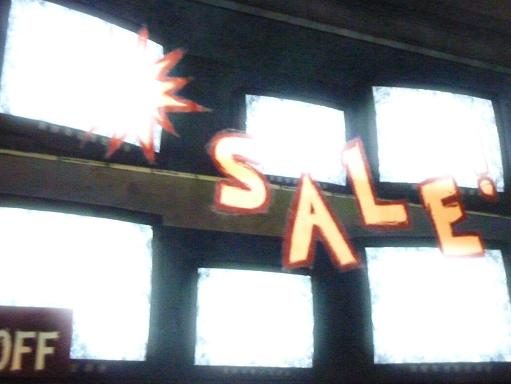 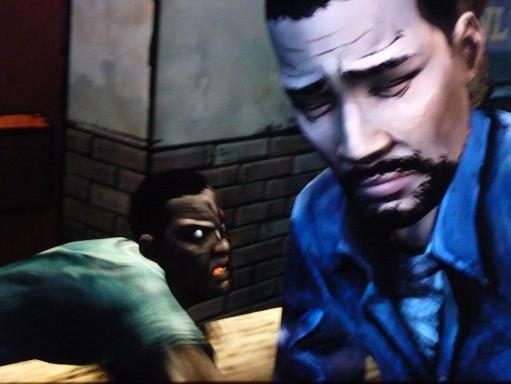 With the keys in hand, Lee and Lilly opened the pharmacy door. UN-FRIGGEN-FORTUNATELY this triggered an alarm. A very LOUD alarm. An alarm loud enough to draw hundreds of zombies to the confinement of our “safe” drugstore. Needless to say all of us had to peace ASAP.

And then I was faced with another decision. Do I save Doug? Or do I save Carley?

I wanted to save Carley, you guys, I really did – she had proven her worth with her awesome aim and she was kinda hot. But she knew Lee was a murderer, so that bitch had to go. /sadface. As we were all hastily leaving the drugstore, friggen’ Larry punched Lee, knocking him out. Kind of. It threw him for a loop, that was for sure. THAT ASSHOLE. I WENT THROUGH SO MUCH TROUBLE FOR YOU. Ahem. Kenny ended up saving my ass. 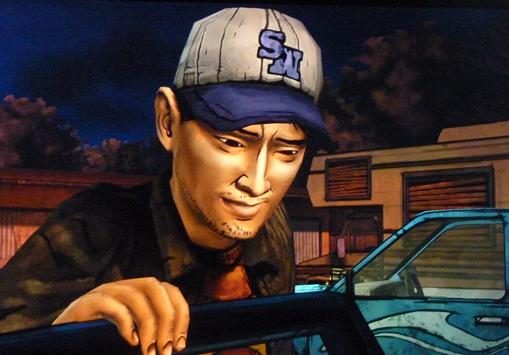 We fled to the motel for shelter. Once we were there, Glen heard Atlanta was overrun by “walkers” and decided he was going to return to Atlanta to see if he could help out in any way. Aaaand with that, homeboy peaced. As the first episode wrapped up, Larry A) Made sure I didn’t want in his daughter’s pants and B) Dropped this little bomb: He knows Lee is a murderer.

Ahem. Here are my stats: 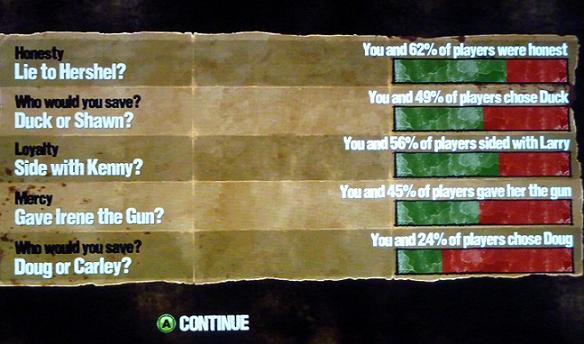 LOL at the percentage that saved Doug. I wonder why everyone saved Carley? Was it her worth? Her virtual bresticles? ;)