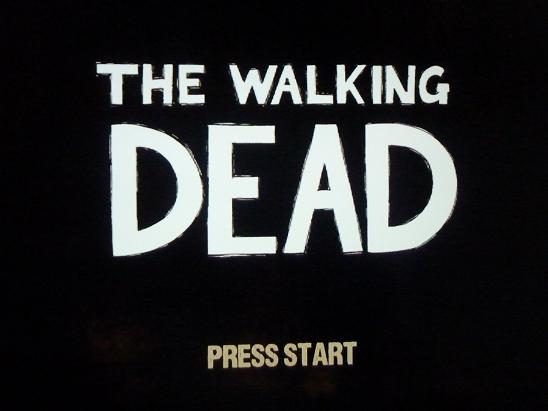 I’ve had a code for the first episode of The Walking Dead since April, but because of this thing that happened called “Xbox 360 going tits-up” I JUST redeemed it yesterday (AFTER finishing Mass Effect 3! BOOYAH!). I wasn’t sure what to expect from the interactive story-esque game, but um, after finishing the first episode let me confess that I am in love with it. For serious. TALK ABOUT EYEGASMS – the cell shaded art, the AMAZING character animations…oh God. I’m getting that tingly feeling again.

Meet…well, meet me. Well, the character I control. His name is Lee and because of the choices I force him to make I love him very much. Anyway, I first met Lee while he was, um, in the back of a cop car on his way to prison. The older cop driving was making conversation with Lee, and I quickly came to the conclusion that I loved the cop as well. Unfortunately Mr. Cop was too busy blabbing to notice a dead person was shambling in the road and we hit said dead person and crashed so hard. When Lee woke up he was in the woods, still in the back of the cop car, and there were moans, screams and another shenanigans coming from outside. RUT ROH.

Lee was still handcuffed, so I had to force my way out of the cop car and grab the keys off of the cop’s body. AND OF COURSE LEE ACCIDENTALLY DROPPED THE KEYS RIGHT BY THE COP’S MOUTH. DID I MENTION THE COP LOOKED PALE AND, UH, LIKE A ZOMBIE WAITING TO LURCH UP AT SOMEONE? WTFBBQ. I just *KNEW* what was coming as Lee reached down to pick the keys up…

…but nothing happened. Thanks for that, Telltale Games. Thanks for shaving a year off of my life.

About the time Lee got himself free from the handcuffs, Mr. Cop began to twitch and moan. Of course this means he wants to eat my face off. But I eventually managed to shoot nice Mr. Cop in the noggin and thus ended his career as a zombie.

Lee was being kind of stupid and instead of his mind screaming “ZOMG ZOMBIE APOCALYPSE!” he began hollering for help. Right. Good job, man – draw attention to yourself. And draw attention he did. Before long tons of zombies were chasing Lee through the woods. He finally came to a fence, hopped that shit and ended up in the backyard of a relatively nice home. I’d hit it. Er, I’d live there. C’mon — it has a freakin’ TREE HOUSE.

Unfortunately the inside of the home was effin’ freaky. Not only was furniture tossed all around, but a HUGE blood stain encompassed the kitchen floor (Lee, being the intelligent man he has, managed to slip on it twice). There wasn’t a lot to see inside, except for some freaky child handprint art. OF COURSE. OF COURSE THERE HAS TO BE A CHILD ZOMBIE IN MY PRESENCE. And believe you me I waited for it to pop out and say “OHAI!”. 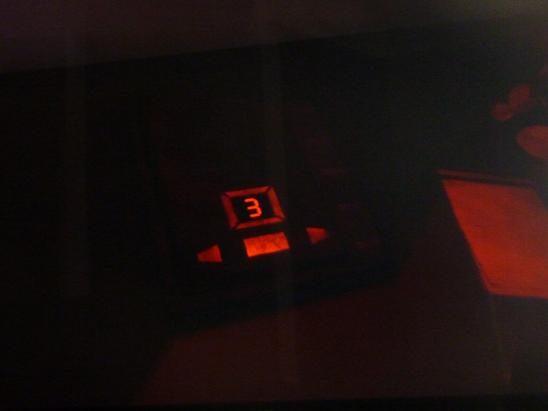 The other notable things inside the house were the three yet-to-be-checked voice messages. (I think I recall these from the original teaser!) The messages were from zom-child’s mother to a babysitter who was apparently watching the zom-child while they were away. From the messages I was able to pick up that the mother and father were on a trip of sorts when the father was attacked by some “crazy” man and required hospitalization, so their absence would be longer than anticipated. By the time the third message played it was evident that these parents were probably not gonna make it out alive. (Because, y’know, when the messages are all panicky and like “I LOVE YOU CLEMENTINE! I LOVE YOU! I LOVE—beeeeeeep” it’s not really a good sign.)

At some point I had obtained a walkie talkie (SUCH a fun word) and suddenly the voice of a little girl came through on the other end. Turns out zom-child wasn’t a zombie at all! I peered outside and the little spawn (Clementine) was chillin’ in the tree house! Unfortunately I was abruptly attacked by a zombie. But it’s okay – for when everything looked bleak and as if I might be nommed on alive, Clementine shimmied down the tree house and handed me a hammer, with which I bashed in said zombie’s brain. Good times. 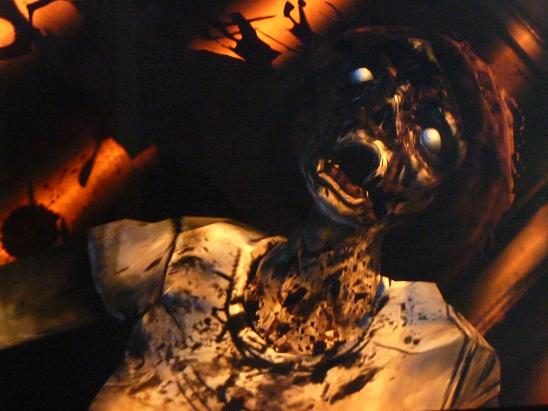 After some brief chit-chat I decided we needed to use the safety of the daylight to try to find a new place to stay. We left Clementine’s house and quickly saw Shawn and his goofy ass neighbor/friend/whatever trying to move a vehicle in the road. After they decided I wasn’t going to eat them, we made brief conversation and I told them I was Clementine’s neighbor and we were looking for somewhere safe. Because, like, had I chosen to tell them I was just “some guy” that could have come across as being a creeper, rah? 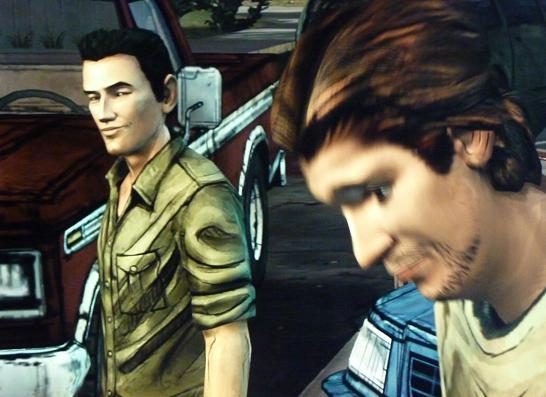 But, y’know, this IS a zombie apocalypse and eventually we were spotted. We quickly worked together to move a vehicle out of the way and hopped into Shaun’s truck. He said he had a farm or some shit. Of course, any fan of The Walking Dead would have a hunch that this was going to be Hershel’s farm, and sure as heck it was. Hershel came out and asked me a few questions while bandaging my leg. HE ALSO CAUGHT ME IN THE MIDDLE OF A LIE. I said that I obtained the leg wound from a car accident while “we” were heading out of Atlanta. He later asked who I was with, and I said “nobody”.  And he was all “Well you just said ‘we’ a few moments ago…”

Shaun then suggested reinforcing the fence perimeter around the farm. Cool. Great idea buddy. It’s not like that’s going to end up killing you tomorrow or anything.

Hershel stuck Clementine and I in the barn where we tried to sleep and such. Lee woke up from a nightmare, but it was an audio-only experience for the player. It sounded like a woman’s voice saying “Tee-hee I love you. Tee hee. TEE HEE.” /DEATH! /SCREAM! /CUE LEE TO WAKE UP VIOLENTLY!

…yeah. That’s exactly how it was. 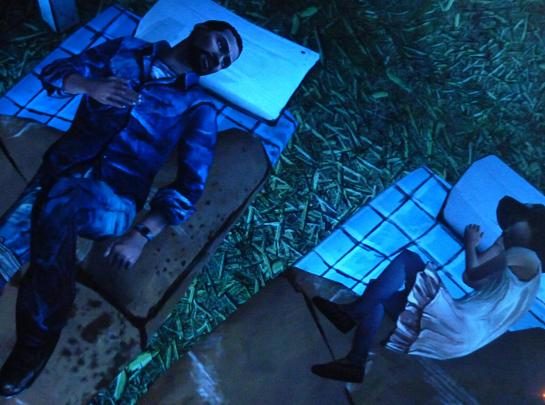 For the record, this entry covers MAYBE 25% of the the first episode. I didn’t realize it would take FOREVER to write it all out. So, episode one (and I’m sure the ones to follow!) will require multiple entries.  ;)