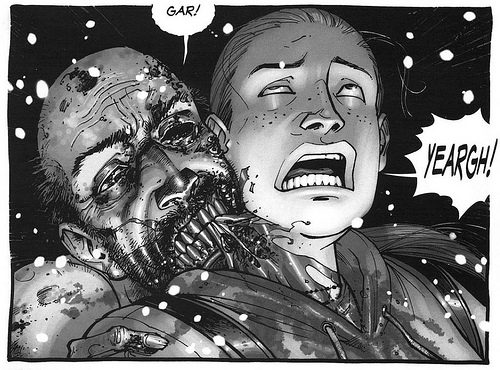 I don’t always read comics, but when I do, I prefer to READ ABOUT ZOMBIES!!!

Okay, that was super lame. That was supposed to be a take on that Jose Cuervo commercial. Er, I mean Dos Equis.

Can we just pretend this never happened? Cool.

I’ve been reading The Walking Dead for a while (I first finished the compendium in June of 2010) and I bought a hardcover and a few trades after that, but  I stopped reading around issue #60.  Theeeen the television show came out and I became obsessed like 99% of the population. But it wasn’t until a co-worker and I began having ritualistic Monday morning recap discussions about the latest TWD episode that I really began wanting to read the comics again.

And seeing as how I’ve been sick for the last week or so I’ve sorta-kinda been spending a good chunk of my time with my nose in the comics. I’m on issue #90, and I believe there are 96 issues out as of right now. I’m so excited to almost be completely caught up!

If you’re not caught up with all of the shows, and/or at least have read to#90 of the comics and you’re deathly afraid of spoilers like I am, BEWAAAAAAARE!!! (You were supposed to read “beware” in a deep, dark and piss-inducing voice. I hope you did, otherwise it didn’t quite have the effect I was going for.)

So, holy crap. I just finished the latest trade a few hours ago, and, again, holy crap. What the heck is going on with Rick and Andrea? Even though I *knew* a hook-up was coming, it still weirded me out. I’m sure it was one of those “ZOMG we’re so fucked up because of this zed-filled world, let’s bang!” situations. I don’t think there are any actual emotions involved, but still…engggh. But props Rick for getting some young tail!

Speaking of Andrea, I find it interesting that the Andrea/Dale love story was omitted from the show. It was hinted that Dale had feelings for Andrea, but that was about it — it never came close to resembling the relationship those two had in the comics. I wonder if that sort of relationship would be too weird for television? I mean, you have the young Andrea and the old Dale, who fall in love with each other and end up assuming the role of parents for a pair of twins. But in the television series, Andrea is a little older, bangs Shane and wants nothing romantic with Dale. Who ends up, uh, dying before they even leave Hershel’s farm.

And then of course there’s the Lori x Shane x Rick triangle which played out differently.

Oh, and Sophia is still a thing that is living and breathing, and not, you know, a zombie chillin’ in Hershel’s farm. And Sophia’s mom, Carol, is SUCH a drastically different character! In the comic she’s like, this hot blonde lady who wants nothing more than to get laid and live a Sister Wives-esque relationship with Lori and Rick. BUT then she ends up killing herself by means of a zombie.

Gah, there are so many differences! I wonder which main story plots will be kept in the upcoming television episodes– like, will the characters run into Tyrese and his crazy ass-daughter and her crazy-ass boyfriend? Will Rick lose his arm? WILL LORI BE KILLED?!

OOH! And I can’t wait to see how Woodbury goes down.

What are some of your favorite differences? Or things you wish wouldn’t have been changed?