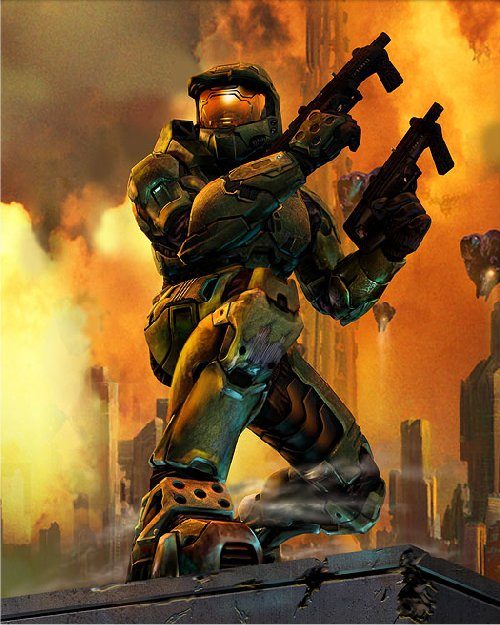 Back in the day I never had the pleasure of owning an original Xbox, so games like Fable, Halo and, erm, Fable and Halo escaped me until I growd’d up and bought an Xbox 360 on my own. Since then I’ve completed Fable, but just last year I wrapped up the original Halo for the first time — and to my surprise — I fell in love with the series. Well, I fell in love with the thought of falling in love. After all I had only finished the first one and was like, “WAZAAAAM I LOVE THIS SERIES!” I mean, I had played Halo before (casually on the story mode, and some multiplayer) and while I never had any negative feelings about the series, the main reason I decided to start up a Halo-thon is because I understood the impact it had on the industry. Simply put, I wanted some of that for myself.

But by the time I had wrapped up the first Halo I had officially named it the “most enjoyable FPS” I had ever played. I was biting at the bit to play more!

Well, uh, it took over a year but I took a bite of  the bit (what?) and finally completed Halo 2 a couple nights ago. I still stand by my notion that it’s IS the most enjoyable FPS I have ever played. I love how the series (remember, I’ve only played 1 and 2) doesn’t take itself too seriously. I love the interaction between the characters, and I love the “silliness” of the game — meaning I can, like, jump on the wing of a Ghost and ride through a level with my partner, or just stand on the top of the firing barrel of a tank, teabag whatever I want, etc. Y’know what I mean? It’s not a “serious” game, per se, but it still manages to be seriously amazing and it is SO well done. If that makes sense. HALO FANS KNOW WHAT I’M TALKING ABOUT.

That being said, there was something in particular that bugged the ever-loving shit out of me. (And yes, my shit is ever-loving.) CAN ANYONE EXPLAIN TO ME HOW THE SAVE/CHECKPOINTS WORK IN THAT FRIGGEN GAME?! Do you have ANY idea how many times my partner and I had to repeat levels just to get to where we were when we shut off the console? Seriously, Halo 2 would have been finished years ago had the game saved our progress where it should have been saved. It was like, “Oh hey! During this gaming session you got  through 80% through the game! Next time you boot it up we’ll start you at 68% because we can!”

Now if you’ll excuse me, I must go read the Halo 2 Wiki and discover what it is that exactly happened during that campaign.