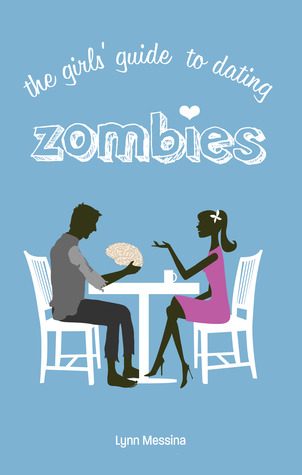 Terrible confession time: I was sent The Girls’ Guide to Dating Zombies back in February.

I just finished it yesterday.

::prepares for onslaught of tomatoes::

BUT IN MY DEFENSE I DIDN’T ACTUALLY RECEIVE THE BOOK UNTIL APRIL BECAUSE MY P.O. BOX LOST IT. I could also make numerous excuses about being too busy to take time each night and read a chapter, but I’m not even going to go there. The point is that I suck so hard for not reading this book any earlier because it was one of the more charming and adorable books I’ve read in a LONG time. So, yes, here I am taking full responsibility for sucking.

It’s a well-known fact that I adore zombies and everything and anything that has to do with them. (Hell, I host a podcast about zombies!) But when it comes to zombie fiction I generally prefer the total zombie apocalypse rendezvous — I like the book to cover the beginning of the undead plague, the failed government attempts, the bloody war waged between soldiers and the braindead pus-sacks, and finally, the adventure of surviving the plague once everything else has gone to shit. I *LOVE* reading about zombie survival. It just turns my crank.

However, the Girls’ Guide to Dating Zombies is different from anything I’ve read before. Instead of getting the before, during and survival aspects of the zombie apocalypse, it’s, uh…well, let me just give you the blurb on the back of the book:

“Hattie Cross knows what you’re thinking: Zombie sex? Ewwwww. But she also knows that since a virus turned 99.9999 percent of human males into zombies, it’s statistically impossible to meet–let alone date–the remaining 0.00001 percent. So she writes “The Girls’ Guide to Dating Zombies” to help her fellow single women navigate the zombie-relationship waters.

Her practical how-to impresses the CEO of the largest drug company in the world, and before she knows it, Hattie, a reporter for a downmarket tabloid that specializes in conspiracy theories, is sitting down with the woman who single-handedly invented the zombie-behavioral-modification market. Granted access to the inner sanctum of zombaceuticals, she meets an actual, living, breathing M-A-N.

Now Hattie, the consummate professional, is acting like a single girl at the end of the twentieth century: self-conscious, klutzy and unable to form a coherent sentence without babbling. Worst of all, the human male appears to have impaired her ability to think clearly. Because all of a sudden she’s convinced a conspiracy is afoot at the drug company and it seems to go all the way to the top”

But let me assure you I immediately fell in love with the main character, Hattie Cross, as well as the author’s witty and humorous style of writing. In fact I loved it so much I finished this book in a matter of hours — once I started I couldn’t stop flipping the pages. I’d moreso recommend this novel to my fellow female zombie lovers, as it’s fun to compare the ” current” IRL men to the deadified zombie ones in the novel, but I’m sure anyone can get a kick out of Miss Hattie Cross and her adventures.

If you’re looking for a relatively quick, quirky novel that touches on a never-before touched aspect of the zombie niche (zombie sex? HELL YES.) look no further than The Girls’ Guide to Dating Zombies.