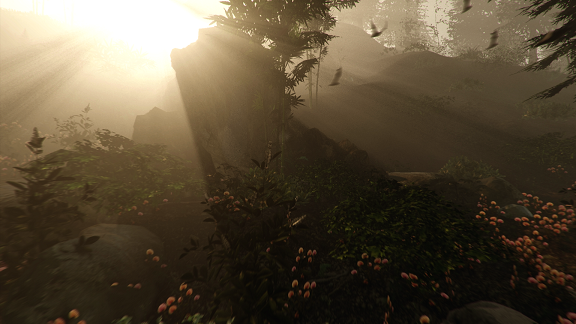 I could have SWORN I had posted about The Forest before, but I can’t seem to find it on this here lil’ blog o’ mine. SO LET’S TRY THIS AGAIN.

The Forest is a thing via Steam’s Greenlight program, and it looks absolutely terrifying. You, the player, are a survivor of a plane crash. So, YAY! You’ve survived a plane crash, and even more you’ve landed in a lush and oh-so-beautiful forest. It should be safe and full of resources to fuel your survival. OR SO YOU THINK. Take a peek at the trailer below:

The first thing that attracts me to The Forest is the survival element. You are LITERALLY dropped in the middle of this forest with one goal — to survive. That’s it. How you do it is up to you, which provides limitless decision making. Build shelter, build a fire, run around like a mad person, I DON’T KNOW. Just keep that heart beating. But beware, because as you saw in the trailer, big, pale, mean cannibal manbearpig human things venture out at night and want to eat you.

But why do they want to eat you? Jeffrey Matulef of Eurogamer sat down with creative director Ben Falcone, and uh, we don’t really know. From the sound of it, they’re just hungry, big, pale, mean cannibal manbearpig human things. But, they’re not necessarily evil. If you happen to kill one of their comrades (y’know, while they’re all trying to kill you) one of them might throw themselves over their deceased brethren and begin sobbing. Or maybe they’ll poon out and peace out. Or maybe they’ll simply leave you alone alltogether.

There IS a story to The Forest, but it’s up to the gamer to figure out what it is. “There is a way to end it, but I think a lot of players will play without ending the game or even realizing that there is an ending…Our goal was a never-ending type game – with an ending.”

“You might see a landmark off to the distance that you can’t necessarily get to yet. You’ll have to build up a certain number of skills and equipment to actually get to some parts of the world,” explains Falcone. “We’re hoping we can provide some curiosity, some passive goals, to give players reasons to go out and figure out more about the world.”

THAT IS SO COOL. Okay, I’m sure this isn’t the first time this mechanic has been implemented, but having free reigns of my survivor and being able to fully dictate what I do in the game sounds fuckin’ lovely, and it actually gives me more incentive to explore and figure out WTF is up. It’s like a known, yet hidden mini-quest within a story within a game. Or something. It makes sense in my head.

Oh, did I mention this bad boy is for PC and Oculus Rift?! HNNGHH I AM GOING TO SHIT MY PANTS SO HARD.

Check out this second trailer, and join me in hoping that this thing gets here sooner rather than later:

Alpha Version is slated to hit sometime early this year. SO C’MOOOOOOOOON.