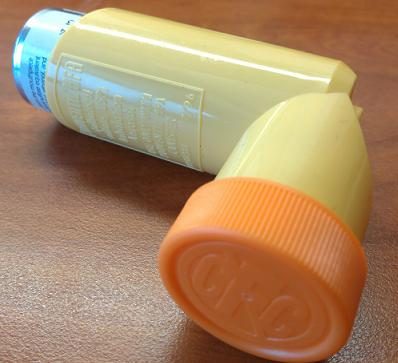 Hey, kids. Do you know what that orange and yellow object is? No? Well let me tell you what it’s used for. You see, every few hours I place my mouth around the tip, whereupon I apply gentle pressure to the base. After a few seconds, I take in its contents.

…oh my God. I can’t believe I just typed that. This was supposed to be a family-friendly blog post in which I reminisce upon the past, but it has already crossed that line, hasn’t it? Anyway, the above INHALER is a thing I take when I’m sick; I am a fortunate recipient of exercise-induced asthma which causes every sickness—whether it be a cold, flu, whatever—to end up in my lungs, causing me to wheeze like nobody’s business. As I’ve gotten older the general side effects I experience from asthma have decreased—probably because I’m now in better shape and not as, ahem, chunky as I was in elementary school (when my asthma developed). In fact, when I was in elementary school I was so terribly out of shape I always had to carry an inhaler on me.

This is the first time I’ve had to use in inhaler in several years (I honestly couldn’t tell you the last time I had to take a hit off of one of these bad boys) so, as odd as it is, this puffer has sparked a few long-forgotten memories. One of which was when I was ten-years-old and had to bum off an inhaler from a classmate because I was too out of shape to make the hike up Angel Falls (I would have told I was dying), but the memory I’ll share with you today is a classic:

When I was nine or ten my grandma would watch my seven-year-old cousin and I every day every summer–yes, this is the grandma who plays more videogames than anyone I know–so we had PLENTY to do. And by do, I mean we had plenty of videogames to play. We had just gotten our hands on Super Mario 64, and to say it consumed every minute of those summer days would be an understatement. 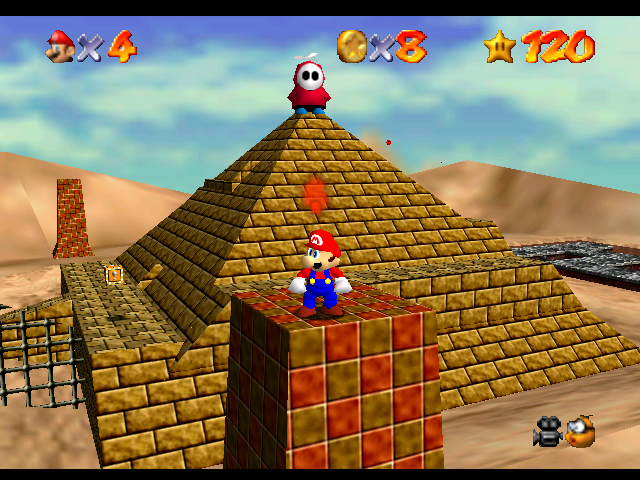 In Shifting Sand Land there are tornados that appear, oh I don’t know, every thirty seconds or so and it allows Mario to reach certain parts of the level. Well, my cousin was waiting for one of the aforementioned tornados and while we were sitting on the couch I took a puff of my inhaler. As if on cue, the tornado he was patiently waiting for appeared.

This gave me an idea.

Puzzled, my cousin asked, “What did you do?”

“I caused that tornado to appear.”

“How?” I could tell his seven-year-old interest was piqued.

Sitting back, I tossed the inhaler in my hand. “See this? It grants me powers. I knew you were waiting for the tornado, and this allowed me to make it appear for you.”

And just like that, I had the poor, gullible kid in the palm of my hand. From then on he’d ask for me to “use my powers” to assist him in every stage; sometimes he needed an enemy to turn around, sometimes he needed a platform to poke out and sometimes he wanted a damn tornado. And with one puff of an inhaler and serious brow furrowing I’d “make” it happen. Thankfully I’d (secretly) been playing ahead so I knew when and where things occurred in each level, and I knew if they wouldn’t, so if I couldn’t provide the assistance he asked for I’d tell him my powers were running low that day.

It eventually came to the point where he started asking me to use my nifty skill in front of our grandparents while they were watching. This raised a few eyebrows, but I think they thought we were just being silly kids. This went on for several weeks.

But one day I got busted.

My aunt (his mom) pulled me aside and told me she thought it was a cute game I was playing–HOW DID SHE EVEN FIND OUT?!–but that my cousin truly believed I had special powers and that he had begun asking for an inhaler himself. Oh. That’s how she found out. Woops.

Sadly, I don’t remember breaking the truth to him; in fact I had completely forgotten about this entire story until my inhaler sparked the memory.

Ah, that poor cousin of mine…I should really flip him shit now that he’s 21. ;)