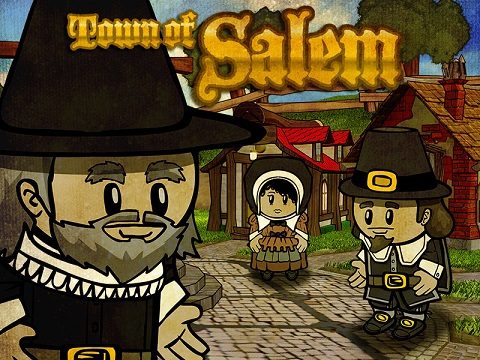 Town of Salem is a fresh innovation on the classic party games Mafia and Werewolf. It is a game of murder, accusations, deceit and mob hysteria.

Town of Salem takes place in the era of the Salem witch trials in an alternate universe version of Salem, MA.

Play the alpha version at: http://www.blankmediagames.com

The game ranges from 7 to 15 players. These players are randomly divided into alignments – Town, Mafia, Serial Killers, Arsonists and Neutrals. If you are a Town member (the good guys) you must track down the Mafia and other villains before they kill you. The catch? You don’t know who is a Town member and who is a villain.

If you are an evil role, such as a Serial Killer, you secretly murder town members in the veil of night and try to avoid getting caught.

Town of Salem has 29 unique roles ensuring a different experience each time you play.

Before a game starts, players are put into a lobby where the host can select what roles will be in the game. Players are then assigned roles at random from the list of chosen roles. Players have an in-game role card that explains their role’s abilities and alignments. For an in-depth look at the abilities of each role please visit: www.blankmediagames.com/roles

The night phase is when most roles use their abilities. For example, Serial Killers stealthily murder people, Doctors heal people who are attacked, and Sheriffs interrogate people for suspicious activity.

The day phase allows the Town members to discuss who they suspect of being an evil role. Once the voting phase starts a majority vote from the town will put someone on trial.

The defense phase is when you plead your innocence to the town. Have a convincing story or find yourself facing the gallows!

During this phase the town will vote on the fate of the defendant. Players can vote guilty, innocent or abstain. If there are more guilty votes than innocent votes the defendant is sentenced to death by hanging!

Town of Salem is a browser game that currently uses the Facebook API to have players log in so their achievements can be saved. In the future, Facebook integration will be completely optional. You can play Town of Salem from any computer and still have all of your characters, houses, maps, items and achievements.

How Much Does It Cost?

Free! Town of Salem is a free to play game.

BlankMediaGames is a small team of game enthusiasts that consists of two programmers, two artists (one focusing on UI and characters, the other on backgrounds and houses) and one sound designer. They want to bring the fun of playing party games like Mafia and Werewolf into a video game that can be played with friends easily online.