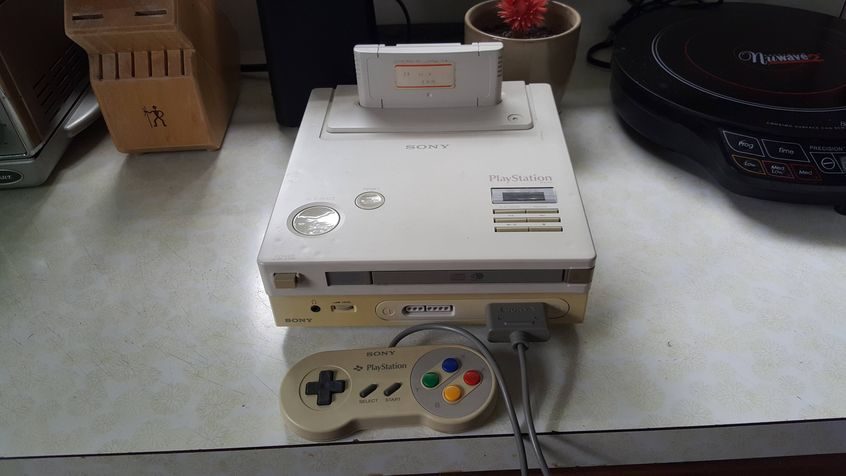 These photos have spread more times than herpes at a high school prom (I…that was an awful example) but hey, in case you haven’t seen these yet, prepare thine eyeballs for something possibly more radder than a box of rad raddies at a radfest.

What you are looking at, friends, is supposedly a prototype stemming from the Nintendo/Sony partnership dating waaaay back in the day. See, Nintendo and Sony were to become bros and, together, they were to work on a CD-ROM peripheral for the SNES. In fact, the partnership went so far as to prompting Sony to reveal their masterplan at the Consumer Electronics Show in 1991. However, Nintendo low-balled Sony and the VERY next day was like, “Oh nvm we’re gonna partner with Phillips for our CD tech.” Sony wasn’t happy, and was like, “EFF YOU we’re gonna develop a thing called the PlayStation.” And the rest was history.

Speaking of history, I should really become a history teacher. I have such a way with words.

Imgur user DanDiebold, the one who uncovered this bad boy while going through his dad’s stuff, had this to say: “My dad worked for a company, apparently one of the guys he used to work with, I think his name was Olaf, used to work at Nintendo and when my dad’s company went bankrupt, my dad found it in a box of ‘junk’ he was supposed to throw out.”

This is possibly significant because a dude named Olafur Johann Olafsson was the original co-founder of Sony Interactive Entertainment. So, hey? This could be the grandaddy of ’em all. Or something.

In any case, this is the internet, and while I hope this is legitimate (because uh that would just be fucking awesome) one can never be sure. Because, it’s the internet.