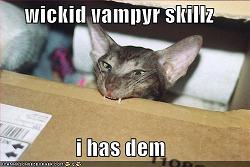 Before I talk about vampires, let me just say I feel like a zombie right about now.

Seriously guys, this weekend I had about three hours to relax. Between working, moving, editing podcasts, running contests and the like I don’t have the amount of free time I used to (let me be clear that I’m not complaining—I love what I do, even if it sucks up my entire life!) and this is going to sound horrible, but I was so stinkin’ exhausted that I couldn’t muster up the energy to sit on my computer and spend what few precious hours of free time I had on Dragon Age: Origins (after all, that would have required me to think and pay attention to something).

So, instead of saving Ferelden from the Darkspawn, I watched (more like mindlessly stared at) True Blood until 2 am. Woops. I even forgot to take my makeup off and consequently woke up with goopy, bloodshot eyes. Grossssss.

For those of you that don’t know, True Blood is an HBO television series based off of the novels The Southern Vampire Mysteries written by Charlaine Harris. In a nutshell, Vampires have “come out of the coffin” across the world, and the plot follows a small-town girl that falls in love with a Vampire.

There’s obviously a ton more to it than that, but whatever. Point being that True Blood is the first vampire ANYTHING I’ve ever entertained myself with—wait…wait. I forgot I was forced to watch the Twilight films a few weeks back. UGHHH. And yes, I was forced.

What I love about True Blood is that it’s…well, it’s an HBO series which means it’s uncensored; True Blood contains nudity, sex, blood, gore, swearing, everything.  I appreciate the lack of censorship because it allows the writers to expose the true culture of vampires without having to worry about holding back. Now, compared to zombies I know jack shit about vampires, but aren’t vampires known as creatures of extreme danger and seduction? How can you accurately convey that disposition in a PG-13 film? You can’t. JUST SAYING.

And now that I’m acquainted with the Vampire, I find myself wondering what the allure is of being with one. Why do some men and women have a fantasy fetish with a fantasy creature? I imagine it’s for the thrill; like the rush a teenage girl feels while sneaking out of her parents’ house to meet up with her “troublemaker” boyfriend. It’s the allure of rebelling; partaking in act that is mainstreamed as being forbidden.

Because c’mon, vampires aren’t the most attractive creatures. Their body is constantly cold, because they’re uh DEAD, not to mention they always look dead. But that being said…if Mr. Eric Northman waltzed up to me and was like “Ohai I’m hungry” I’d be like “Ohai I’m here”.

While I’m finding vampires to be cool and all…I think my heart will always belong to zombies. They’re so disgustingly adorable in their own way <3.