Oh my God you guys…for the first time in months I’ve actually finished a game! I know, I know. It’s mind-blowing. In fact, the world probably stopped spinning for a few moments when I completed Nintendo’s latest …well, I really want to insert “masterpiece” here simply because it would flow well, buuut y’know. I wouldn’t be true to myself if I did that.

As suspected, Sky Keep was the last dungeon (or temple, whatever) in the game and it actually turned out to be one of my favorites! In particular I really liked the layout of the dungeon. Instead of the dungeon being a smooth, flowing room-to-room shindig it was in the form of one of those slider puzzles—meaning the entire dungeon was broken into little squares and you had the God-like ability to move each piece around, directly impacting and affecting the areas you could explore. 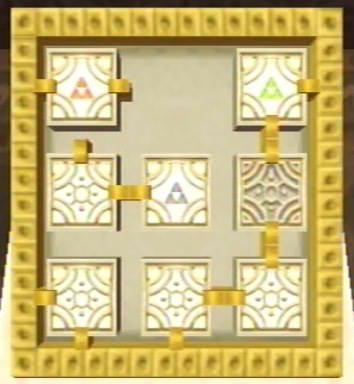 Also: I don’t care how simple it was meant to be, that was a brainfuck in itself. I’ve always hated those types of puzzles.

Sky Keep was also the first dungeon that made me feel (somewhat) like a badass. It only took, what, six dungeons but I was finally presented with challenging battles. GO AHEAD, MOBLINS! RAIN YOUR FIRE ARROWS DOWN UPON ME WHILST I BATTLE EPIC SKELETONS! Yeah. You could say I was walking around with my chest puffed out after that one.

But the greatest thing about Sky Keep was that it allowed me to FINALLY GET MY HANDS ON THE TRIFORCE!!! My inner 10-year-old self–who has read every Ocarina of Time Triforce rumor to grace the interwebs–was geeking out so hard. These weren’t shards like in Wind Waker, oh no. These were legit pieces. FINALLY!!!

There wasn’t a head-honcho boss to defeat upon completion of the Sky Keep (the entire point is to track down the Triforce pieces) and after collecting all three, Link prayed to the Goddess Hylia to trap The Imprisoned. Aaaand the entire Keep sorta-kinda fell out of the sky and on top of the Imprisoned below. HA! I was reveling in the fact that I wouldn’t have to fight that bastard for a fourth time. After all, his veiny toes were disgusting.

Because The Imprisoned was destroyed, Zelda broke out of her cocoon-like rock crystal placenta thing and a sappy reunion ensued between her, Link, Groose and Impa. Dawwww. But it was inevitably cut short when Ghirahim decided to stay true to typical villain lore and interrupt. Because The Imprisoned was toast, he figured he could kidnap Zelda, take her to the past and revive Demise by using her life force. Lovely.

Ghirahim snatched Zelda (while everyone gave a half-ass attempt at stopping him…JUST SAYING) and took her through the Gate of Time. Being the studly Hylian that I am, I followed. Now, the fight that ensued with Ghira-whatever was frustrating because the Goddess Shield had busted while trying to reach him at the bottom of the Sealed Grounds (where he had already started the ritual of draining Zelda’s life force) aaand a busted shield made the battle with him rather difficult. Actually, I’d say it made it more frustrating.

See, at one point you need to thrust your sword into his chest in order to defeat him. Okay, no biggie, except he has a sword which he uses to vigorously block your attacks. We figured he needed to be stunned first which would cause him to drop his guard, allowing us to perform the aforementioned act of sword-thrustation. (Remember this is all being done cooperatively, meaning a friend was controlling the movement of Link and I was controlling everything else.)

Okay, but how do you stun this fucker when you don’t have a shield? After trying almost every tactic, I gave in and looked at the guide book. DO YOU KNOW WHAT THE GUIDE BOOK TOLD ME? It told me a shield was absolutely necessary in order to defeat Ghira-asshat. Freaking out, I checked the internet.

Internet, I love you.

The internet assured me all I had to do was knock the sword out of his hand. Ugggh. That was a pain in the ass, but with a few carefully done waggles he was defeated in a minute or two. But it was too late; during the battle enough of Zelda’s life force had been drained and Demise was being resurrected. FFFFUUUUU….

AND with that, ladies and gentlemen I will wrap this log up. Look for part two (or something) soon!!