I started off this thang by visiting the demon in Skyloft and giving him 15 gratitude crystals, and was graciously rewarded with a medium wallet and a heart piece. Now, I don’t think I talked about this demon in my last log, but he’s the dude who apparently “kidnapped” that Kikiel girl,  but it turns out this demon is the fruitiest demon of all time. Like, he’s super polite and not scary at all. And here I thought I would finally get my bout of twisted violence in Skyward Sword…. 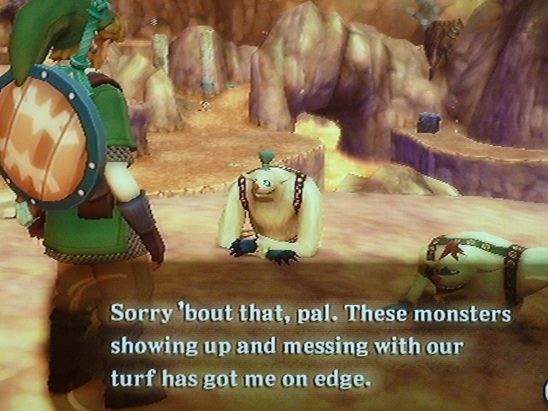 After that, though, I dove through the cloud-vagina and made my way to Eldin Volcano, where I was quickly greeted by these two mole/rat creatures called Mogmas. To be honest, they kind of remind me of sleazy men you’d find at a bar. Anyway, Moblins have been harassing these digging creatures, taking over their territory, and because I am Link I am obligated to give a damn. As I explored the volcano, several Mogmas mentioned to Link that another human dressed in black had recently passed through. Unless Zelda went all emo on me (hey, who could blame her?) chances were that it was a different person.

Next, I was introduced to the bomb flowers. 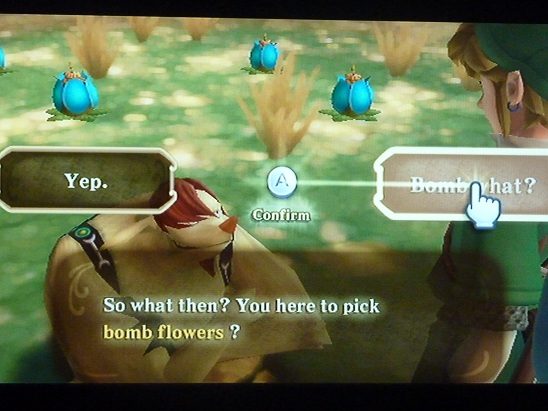 Oh, motion controls. I need a soapbox for you. Ahem. Now, there are two ways to allow these bomb flowers to leave Link’s hands. You can either point the Wiimote UP and flick it forward to have him throw the bomb (which works pretty well) OR, OR, some instances require you to roll the bomb flower by pointing the Wiimote down and basically bowl with it.

I was playing Zelda on my couch today, like all other days. The only exception to today was that I had a KILLER chiropractic appointment last night and it tore my back a new asshole. I was hurting, and hurting bad. So, every time I tried to “bowl” a bomb flower I had to sit up, scoot my ass to the edge of my couch, make sure my ottoman wasn’t in the way and bowl my bomb flower. Half of the time it didn’t even work that well because I was in such an uncomfortable position. Now, take that rage and pile it on top of the other rage fit I had moments earlier when I was trying to gain access to a goddess cube and other random treasure, but couldn’t because THE FREE FALLING MOTION CONTROLS FOR LINK ARE SO FUGGIN’ WONKY. Seriously, they are terrible. It’s the worst thing ever. I had to skip out on treasure because the motion controls are EFFING NERD RAGE INDUCING.

Whew. Stepping off of the box now…

Eventually I came into contact with the mystery person. To me, dude looks like a Shiekah. Or “he” could be a chick. Hard to tell. The Sheikah race swears to protect the royal family at any cost, so I supppooooose it makes sense that they’re coming out of the woodwork and saying “OHAI” right about now. He/She/it told me to move forward. Well, duh Mr/Miss/It Sheikah. =__=.

Man. I shouldn’t have went on that bomb flower rage. Now I’m a little irritated at the world. <3.

The next thing of…significance…I came across was the game Thrill Digger—which kind of sounds like Mine Sweeper, but with rupees and bomb flowers. I was tempted to give it a go, but I had heard it’s extremely addicting and I didn’t have that many rupees, so I passed and instead shot the ore on the walls of the room. Easy profit, CHYEAH! 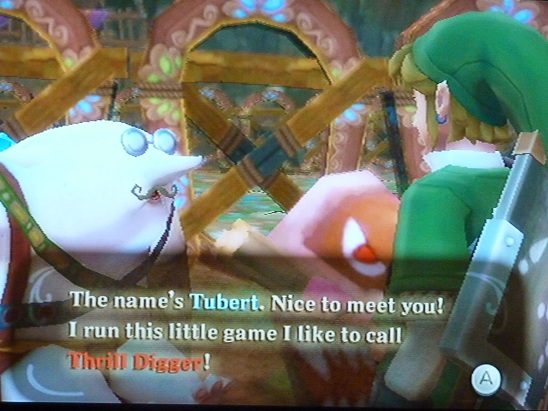 In order to enter the temple and “save” Zelda yadda yadda yadda I had to find five pieces of a broken key, using dowsing. Do I sense a pattern here? I think I do. 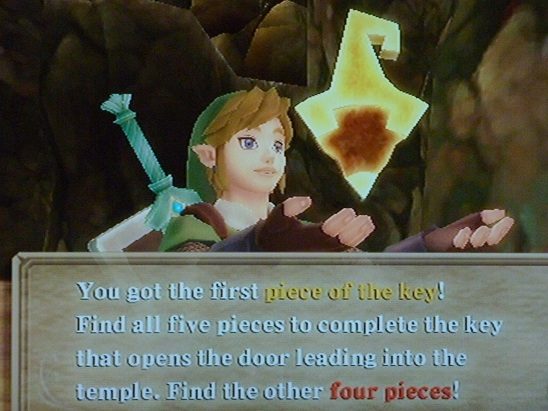 Once I found all five, I was pleasantly surprised to find that I didn’t have to contort my wrist in order to get the key to fit the slot. 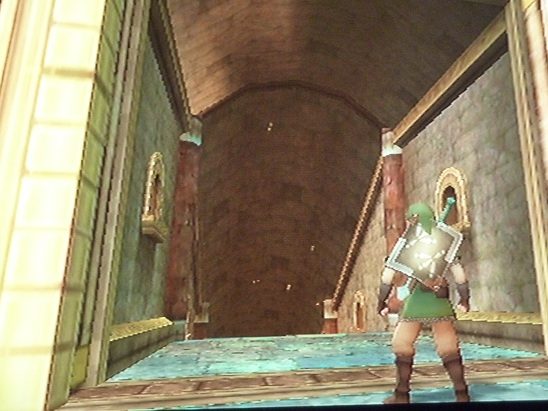