So, I don’t know if it was, like, dragon season in Skyrim last night or something but within the span of 45 minutes I slaughtered three of those bad boys. It was crazy! There I was, meandering about murdering flowers, mushrooms and such when *BLAMMO!* my controller would vibrate like it had caught a seizure (yes, caught a seizure) and one of those bastards would land nearby. It would then proceed to belch fire at me. Unfortunate.

Thankfully the dragons I’ve come across thus far are easy to take out–when I’m by myself, that is. Comrade-ism is such a weird thing in Skyrim;  races and creatures alike will join forces to defeat a dragon but as soon as said dragon is tits-up on the ground those fuckers turn on you. 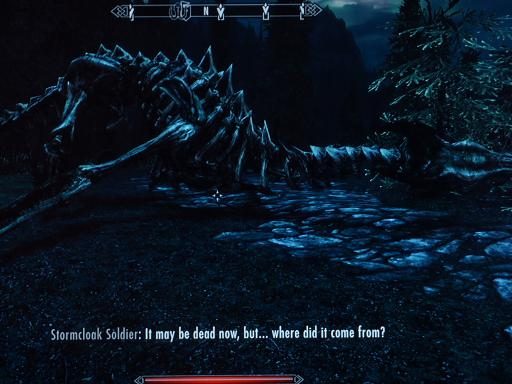 I stumbled upon this guy while passing a fortress inhabited by several Stormcloak soldiers. Because he landed between the fortress and I everyone and their uncle  joined the battle and began shooting arrows and swiping at the dragon with their weapons. I, amidst all the chaos, accidentally nicked a Stormcloak with my mace. The next thing I know half of the fortress is attacking the dragon, and the other half is shooting me with arrows! WHAT THE HECK?! (Ahem…I took so many arrows to the knee. OH YEAH BABY, I JUST WENT THERE.)  I really didn’t feel like taking on an entire fortress AND a dragon so I loaded a recent save file and started the battle over, whereupon I accidently shouted my Fire Breath at three Stormcloaks. My bad. 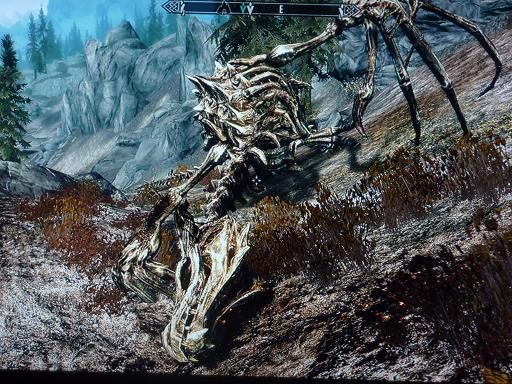 I spotted this one as it landed on the other side of a river. When I finally caught up to it I saw Mr. Dragon was already beefing with two giants. From painful experience I know these oafs can kill me in two swipes but they normally don’t flip me shit if I don’t flip them shit. I trotted over to the fight and began partaking in it myself.

Apparently I hadn’t learned my lesson from Exhibit A because when my stamina ran low I used a Shout aaaaand two things happened: 1) The dragon died and 2) The giants were also hit and began stomping towards me. Wonderful. After I absorbed the dragon soul I ran like the dickens BACK across the river and waited. The giants followed me to the edge of the river but would proceed no further. I waited some more. They turned around and clomped back up towards the general area of the dead dragon.

Figuring I was safe, I headed back towards the kill zone–after all, I had loot to collect!

But those giants remembered me. 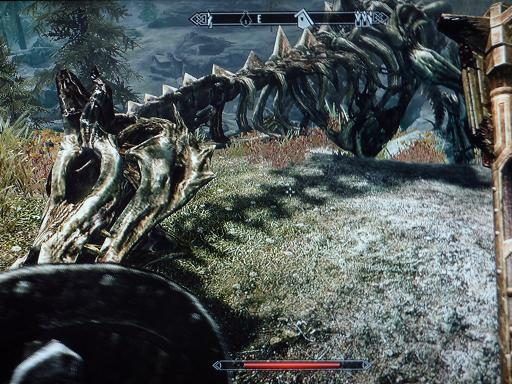 This dragon landed in an adjacent field therefore I concluded it was wreaking havoc on another poor soul. But in this case the poor soul turned out to be a bear. PIECE OF CAKE! I can easily take on a bear AND a dragon, but my plan was to wait until the dragon was dead before I turned Smokey into…into…a dead Smokey. (Smooth.)

Unfortunately the dragon landed a critical hit or something right before it croaked and nearly depleted my health bar—which was no bueno seeing as the bear I MANAGED TO AVOID HITTING DURING THE BATTLE WITH THE DRAGON was now charging me. I know, I know; my plan was to kill it anyway, but for a split second I was hoping he could, like, become my snuggle partner in Breezehome until I marry Farkas.  Anyway, I realized I was out of my typical healing potions (which were stored on my “favorite” menu) so I had to pull up my inventory to find something else.

And I did it JUST in the nick of time. 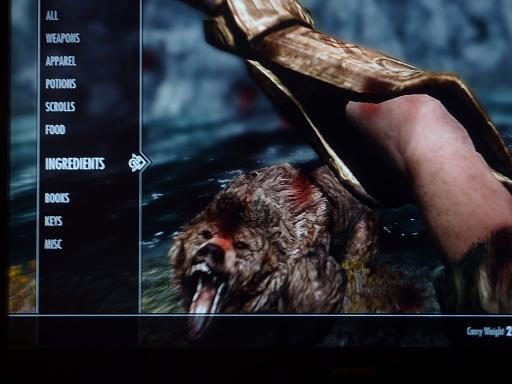