So last night was a very interesting Skyrim night.

Earlier I had read that an easy way to level up your sneak AND overall level in Skyrim is to slightly exploit the game by sneaking around in the guard barracks at Whiterun. How this works is as follows: You enter the sleeping area of the barracks sometime after 10pm. At this point several guards shuffle in from their excruciating day of work and plop on their oh-so-confortable cots. I, then, make a fool of myself and sneak around in front of them. This is extremely efficient in leveling sneak because I’m, like, totally sneaking around guards. Like a ninja.

The first time attempting this was frustrating because I couldn’t walk no more than two steps without being detected, so I spent a chunk of time looking like an artard doing some cracked-out rendition of the electric slide. I think I raised my sneak from 19 to about 24 (and overall level from 9 to 10) before I became way too impatient for that tomfoolery.

While leaving the barracks I encountered the greatest thing ever:

Now, the first thing I typically do upon popping my cherry with a new game is press every single button on the controller in order to figure out WTF it does. Apparently, though, I had completely ignored the Y button. Oh, the vertical mountains I can now climb…

I waited until morning and ventured into the fields and mountains of Skyrim.

So, like, you know those big ol’ giants that just kind of stomp around next to their pet mammoths? Yeah. I was feeling a bit, ahem, ballzy and had the brilliant idea of approaching one. I mean, I’ve seen them numerous times before but they looked mean and, well, tough. Anyway, with this new-found confidence I walked up to one and unsheathed my weapon. But it, just, like, looked down and breathed on me. At that moment I was so, SO grateful the videogame industry hasn’t invented some sort of controller add-on that emits smells and odors. I walked around the giant, eyeballing it. I saved my game, and with an eyebrow raised I slashed it with my pansy-ass Orcish Mace.

Oh, the big friendly giant wasn’t so friendly anymore. Now he was just big and MEAN. I lasted about a swipe before loaded my recent save back up. And, once again, Mr. Giant was big and friendly. But I then thought I heard some rustling nearby, and sure as shit some stupid Khajiit was freakin’ stalking me! I quickly took care of THAT problem and found this lovely little note on his/her person from the Dark Brotherhood: 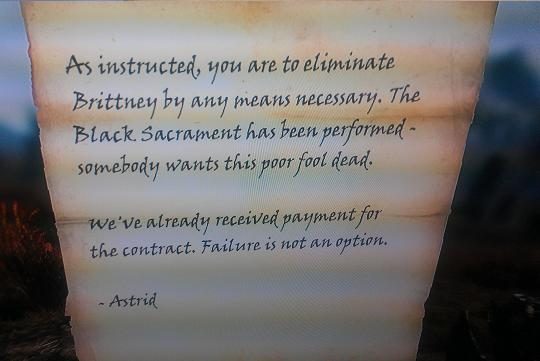 Yeah, I named my chick Brittney.

I’ve heard many things about the Dark Brotherhood. And by “heard” I mean I’ve read many tweets from my peeps on Twitter, saying “VIVA LA BROTHERHOOD!” and “Dark Brotherhood FTW!” You guys, I don’t even know WTF the Dark Brotherhood is, but if they are trying to kill me and stuff they really can’t be all that great. But I know how it’ll go—I”ll call them out on their, you know, failed assassin and they’ll be like “OHAI you must be great or something come join us!” And then I’ll probably join.

After exploring a bit, I figured I’d finally tackle the Western Watchtower quest and go kill me a dragon. And I did just that. It was pretty easy, but then again there were a handful of people attacking it as well, so I can only imagine how tough these things will get. Apparently I absorbed the dragon’s power, which lead to the guards going on and on about how I’m Dragonborn, which then lead to this…

Y’know…I have no words. I guess I’m so accustomed to JRPGs and whatnot I assumed I couldn’t even TOUCH the magic menu. But hey! I’m now a Nord warrior who can heal herself! SWEET!

And now I can shout things. EPIC.