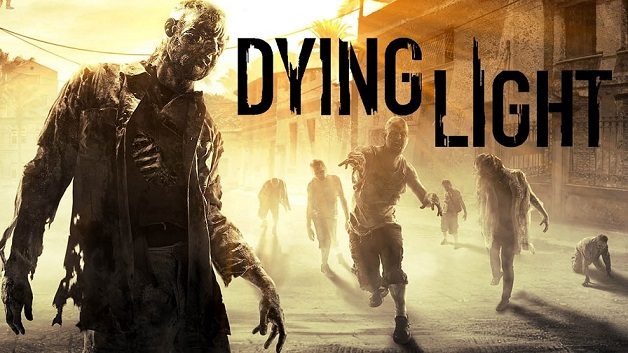 Thanks to the wonders of social media I haven’t been very, erm, private about my excited feels towards Dying Light. I’m recommending it to practically everyone. That said, there’s only so much one can fit in a Facebook post or in a 140-character tweet, so I decided to come to my lil’ corner of the internet to spew some Dying Light shenanignas.

I have quite a bit to say, and since most of you are violent bastards (I kid, I kid) let’s start with the combat, shall we? 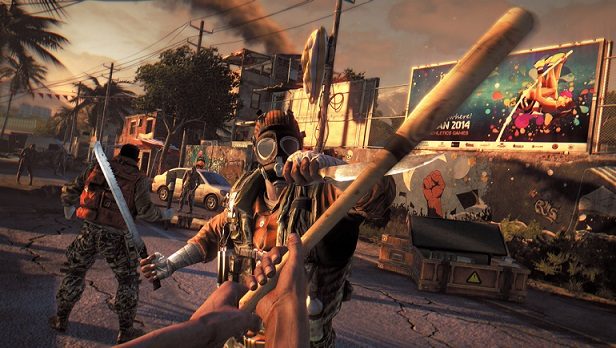 Never before have I experienced combat so freakin’ visceral. Every whack with a blunt weapon feels solid, heavy and incredibly realistic. The infected don’t go flying upon being pummeled, as we’ve become accustomed to seeing in other titles, but they stagger, they stumble…or, if you land an unlucky hit, they’re simply unphased. Slicing the baddies with sharp weaponry such as bastard swords and machetes feels swift, light and is EXTREMELY satisfying. Juuuust like a hot knife through butter, there were several occasions when I’d slice off three heads in one swing. Umffffff.

Throughout the game you’ll encounter hundreds of normal (aka unmodified) weapons, such as machetes, swords, pipes, planks, etc., and even more crafting components like blades, electronic parts and household supplies. But none of that will do you any good unless you know what to do with ’em, so scattered throughout Harran are several Blueprints that unlock different weapon modifications. I dislike math as much as the next person, but in short: Blueprint + weapon + required crafting components = modified weapon. 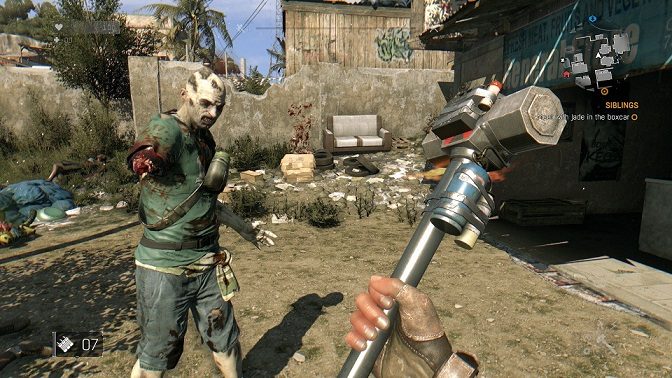 Weapons are finite as they will ultimately break, and I’d say I crafted roughly 30 weapons during my time with Dying Light. Towards the beginning crafted weapons were nothing more than a plank with several nails haphazardly sticking out, but towards the end I was rocking a medieval bastard sword with some crazy flare/electricity combo that kicked everyone’s ass and took everyone’s name. I mean, after beheading an infected (as though that wasn’t enough) the sword would cause the rest of the body to convulse on the ground as electricity pulsed through it.

The crafting components aren’t just used for upgrading weapons. You can use the crafting component sans weapons to create molotovs, firecrackers, exploding throwing stars, grenades, medkits, stat boosters and much, much more. There’s a variety of craftable items that supports different types of playstyles. If you’re more of an agile player and prefer to stick to the rooftops, you’ll want to create ranged items. For example, if I saw an intimidating horde of infected, I’d position myself on a roof, bus, or whatever, basically anywhere where I thought I’d be safe from danger. I’d then toss a bundle of firecrackers into the horde. (The noise would draw their attention and they’d slowly shuffle into a tight ball of infected bodies.) When they were nice and close to each other, I’d toss a Molotov into the crowd, along with a DIY grenade and an exploding star, and laugh manically as my combat experience skyrocketed. Of course, if you’re more of a feet-on-the ground kinda gal/guy, you could still use firecrackers and Molotovs to your advantage. Firecrackers could be used to draw attention away from where you need to go, and a strategically thrown Molotov could slow down any pursuers.

While the variety of items was appreciated, I have to be honest and admit I used less than half of them. You can only carry four “items” on your person at a time, and if you want to rotate items from your inventory into your immediate-use slots, you need to pause the game, sift through the backpack UI (which was a bit jumbled and unorganized) and then switch out your items. Not a huge deal, but there was generally an item I consistently needed in the immediate-use slot, such as my grappling hook. That only left three available slots, and with 15 or so different items to chose from, the need to pause the game, scroll through the inventory, equip items, try them out, pause the game, reequip the items needed…it became a hassle. (Not to mention when playing co-op bringing up your menu doesn’t actually pause the game like it does in single player, so you need to ensure your partner pauses their game as well.)

I thought of a few ways to streamline this. Perhaps creating a separate tab dedicated to items would help; this way players wouldn’t have to sift through their weapons as well. It could also be as simple as creating a filter. To take it a step further, any future installments could lessen the amount of items available, but include the option to upgrade the ones they have. Take grenades for example: Instead of offering several different types of grenades, provide a grenade skill tree. This skill tree would allow players to upgrade blast radius, knockback, damage, and if they wanted, they could add traits such as “freezing” or “toxic.”

One final thing about crafting and then I SWEAR I’ll move on: I understand wanting to keep the game as, well, “realistic” as possible, but the ability to craft some items a’la Dead Rising 3 could be really, really fun. Like this thing, which I believe is DLC: 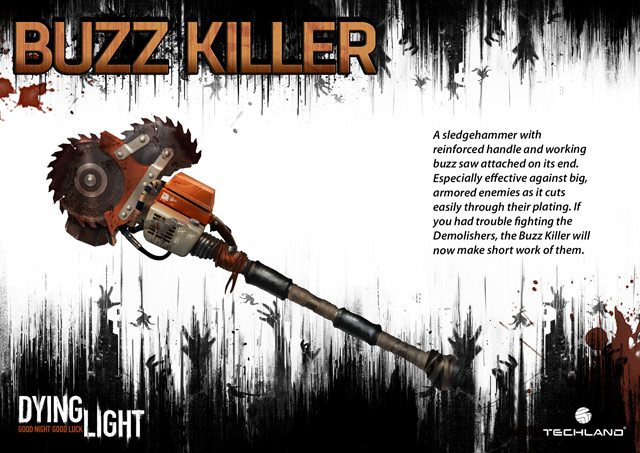 There’s a lot to see in Dying Light. The first half of the adventure will take place in a certain location, and in the second half players will introduced to a new area. I won’t go into more details to avoid spoilers, but know that you can get lost in your surroundings…er, figuratively AND literally. Most of the things to do and see require that you travel vertically, so be prepared to hone in that parkouring skill. Speaking of, while at times a bit clunky, I thought the parkour mechanic worked well-enough to avoid any major “RAAAAGE!” moments. Basically once you figure out the mechanics of it, and appropriately adjust, it’s smooth sailing. (I would say I’m inspired to try parkour IRL, but seeing as I can barely walk in a straight line while sober I’m gonna have to ixnay that idea.)

But as much as there is to see in Dying Light, there’s even more to do. On top of the entertaining main missions there are a metric butt-ton of sidequests. The majority of sidequests were interesting and far more varied than typical sidequests, and, thank God, only a handful felt like fetchquests. Sidequests took me to cannibal-infested broadcasting stations, department stores with electrified floors, abandoned apartment buildings and more. I also found myself delivering chocolates for some crazed guy’s dead mother and defeating “trolls” within a daycare’s parking lot. 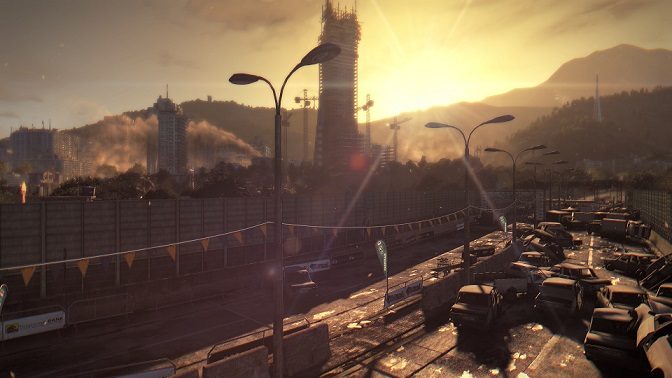 You may have heard that Dying Light has a day/night cycle. During the day infected are much easier to deal with, as you, the player, can see everything. You can see how many are in a horde, how many are behind you, etc. Of course, being able to see your surroundings (buildings, ledges, etc.) in broad daylight is useful in the case you need to make a quick escape.

Come night, though, it’s a whole ‘nother ball game. These bastards called Volatiles come out and they’re the bringers of hurt and sadness. (Good luck taking a group of two or three of those arseholes down.) The number of infected that fill the streets seems to double, too. But if venturing in the dark isn’t your thing, you can find a safe house and safely “sleep” until dawn breaks. However, IF venturing out at night is totally your thing, you crazy person, all XP earned will be doubled. 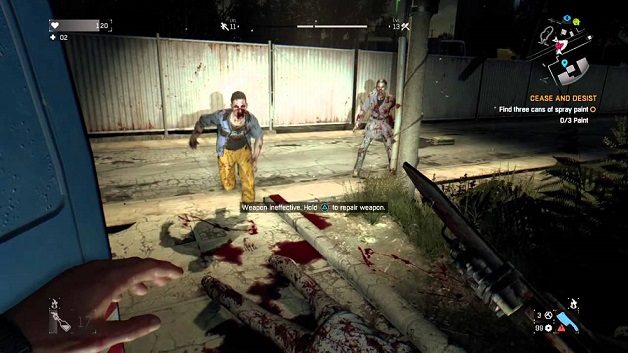 Venturing during the day can be intense, but venturing at night is just plain creepy and I tried to avoid it whenever possible. If, while parkouring about during the safety of the sunlight, I noticed the sun was beginning to set I’d rush to the nearest safehouse and skip the night sequence altogether. But you know what? I would have preferred more required night-missions. Like, force me to play at night. Force me to be strategic and to deal with the Volatiles. Sadly, nighttime seemed like nothing more than an optional, increased difficulty, and I think the development team could have done so much more with it.

Okay, so I’ve highlighted some of the main drawing points of Dying Light. Now, take all of that awesomeness, throw in co-op and you’ve got yourself a real treat. Co-op is where this game truly shines. With the exception of two segments, I played the entirety of Dying Light cooperatively. The amount of fun my partner and I had (co-op supports up to four players) climbing rooftops, taking on hordes of zombies, crafting and comparing weapons is crazy stupid. Resources aren’t shared and there isn’t a way to give each other items, but that never felt like a barrier. If there was something either one of us needed, we had a good idea where to find it.

If a mission required multiple tasks to be completed, we’d either split up or do them together. With that said, don’t expect to play cooperatively and complete separate missions concurrently. In order to activate and complete mission objectives both players must be present at the marker. Thankfully, if for whatever reason your teammate is across the entire freakin’ map from you but you’re ready to turn in a quest, a handy “insta-travel” feature has been implemented. Note that this feature only works when activating missions/turning in missions/attempting to sleep at a safe house.

By the time I wrapped up Dying Light I clocked in around 40 hours, and that’s with several unfinished sidequests. Dying Light offers tons to see, tons to do, tooons weapons to craft, not to mention thousands of infected to bash…and I know I didn’t get into it too much, but there’s also an entertaining story in there as well. In short, I recommend you give it a shot if it sounds like something you’d be interested in. But if you have a friend that’s down to play co-op with you, then by all means, stop reading this and buy the damn game.