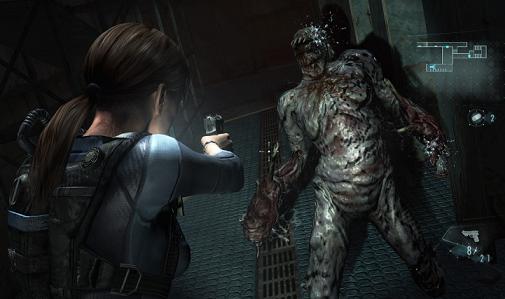 I’ve always LOVED Resident Evil (hell, I’m modeling one of my bathrooms after the friggen’ series), and while I’ve enjoyed the “newer” iterations (Resident Evil 4, 5 and 6) I reaaaally miss the creepy, albeit slow, survival horror a’la Resident Evil 0 -Code Veronica. Y’know, the backtracking, the crests, the door keys, the fucked up zombiemanbearpigs….ah, that’s the shit right there.

It shouldn’t be a surprise, then, that I was SUPER looking forward to the console port of Resident Evil: Revelations. (As much as I wanted to play the handheld version, I just don’t do handhelds. Or they don’t do me. Either way we’re not friends.) I had heard from a few buddies that it was a nostalgic throwback to the older series, and that, my friends, was music to my ears and the tingly to my pants. …What?

Anyway, I bought the Xbox 360 port the day of release, and while it may have taken a few weeks (this thing called E3 got in the way) I’m ecstatic to announce  I recently completed the game and  saved the Resident Evil: Revelations world! Er, I should say I only saved my ass, because let’s face it — we never really save anything in the Resident Evil franchise. I mean, supposedly we always prevent some major virus from being globally dispersed by evil masterminds, but doesn’t it always seem like our heroes take one step forward and, like, 20 steps back? There’s a reason there are about 37 1/2 installments in the franchise. Just saying.

Resident Evil: Revelations took me on a entertaining throwback trip down nostalgic lane. For starters, it had the ominous, explorable, creepy-ass rooms I’ve become so accustomed to. And true to Resident Evil fashion, they were jam PACKED with details — appropriately ranging from home decor to laboratory equipment — and oftentimes I would trot around and imagine what type of Resident Evil shenanigans would have taken place within those very walls. Because I’m a nerd.

Speaking of rooms, one of the main settings of the game is a luxury cruise liner, so it goes without saying backtracking has returned and is in full force. This  might sound drab and boring to some, but I find there’s a unique aura of mystery knowing all of the game’s puzzles, secrets and events are in front of you; they’re just waiting to be unlocked. Even so, there’s always different shit happening. You may have ventured through that eerie, connecting cabin several times but you never know when that “dead” body slumped in the corner is suddenly going jump out at you. Know what I mean?You can’t ever feel too comfortable with your surroundings. (HELLO INFAMOUS HALLWAY IN RESIDENT EVIL 2.) I must also give props to Capcom for inserting all of the memos, diaries and other informative tidbits I found scattered throughout the game — those greatly satisfied my hunger for Resident Evil lore. (Fun fact: those memos and whatnot are what I most look forward to in a Resident Evil title.)

Unfortunately one of  my favorite parts about Resident Evil: Revelations, the tendency to have an AI controlled partner with you at all times, also leads to it’s biggest downfall. While I loved having my AI partner around (it helped relieve some of the unavoidable anxiety I feel when playing survival horror titles)  I felt like my partner had nothing to contribute when it came to firefights. The enemies attacked yours truly 99% of the time — they, erm, tended to completely ignore my partner — and I swear my partner’s weapons were only inflicting a fraction of the damage.  (There were a few occasions when I was out of ammo and waited for my other half to take a creature down. It, um, didn’t happen and I ultimately had to utilize the “melee, run, melee, run” technique.)

Like, okay. I get it. The game is about ME surviving and ME killing shit, not about my AI broseph’s rise to fame, but it was kind of distracting after noticing my partner had literally stood in same spot for the entire duration of several boss fights. “HEY THERE CHRIS! Don’t mind me sprinting and scrambling around this room like a madwoman, you just continue to stand there and keep peppering the boss with your adorable pistol ammo. No worries bro.”

But other than that little complaint I reaaaally had a lot of fun with this one. If you enjoyed the older installments in the franchise then I think you’ll really get a nostalgic kick out of Revelations.  Give it a shot, and let me know what you think! If you’ve already played Revelations, tell me all of your deepest thoughts and ideas. Did you enjoy it? Did it bring back the warm and fuzzies for you?