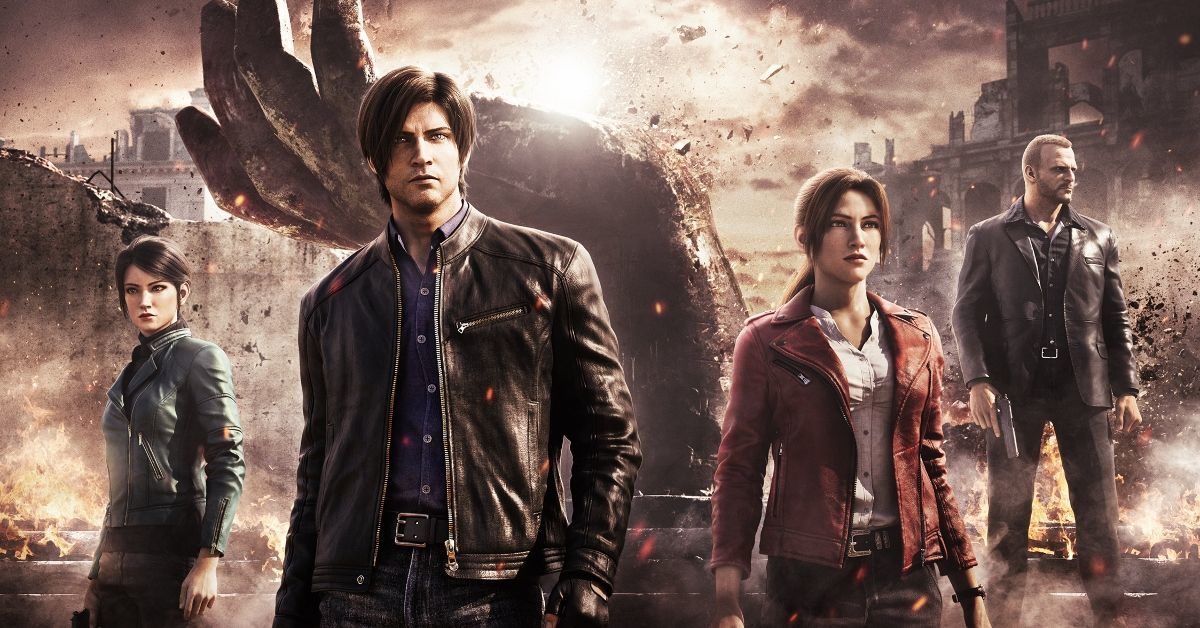 WARNING *bwoop bwoop* this post will contain spoilers for all four episodes of Infinite Darkness.

Resident Evil Infinite Darkness: I’ve laid mine eyeballs upon it.

I honestly considered just straight up copying and pasting the notes I frantically inputted into my iPhone as I watched and events were unfolding, but I then realized that LITERALLY no one would be able to understand what in the ever-loving-Wesker I was trying to convey. So now I have the extreme pleasure and honor of deciphering my own chicken scratch.

I, like so many of you, was SO SO SOOOOOO(ooo) excited about Resident Evil Infinite Darkness, not only because it stars my faves Leon and Claire, but it visually looked to be a CG orgasm for the eyes – an “eyegasm” if you will. And let’s face it, most video game film adaptations featuring IRL humans rarely hit the mark, but when you’re using CG the opportunity to “nail it” increases exponentially in my opinion. But damn, you can’t blame a girl for getting a little excited – just look at these promotional images: 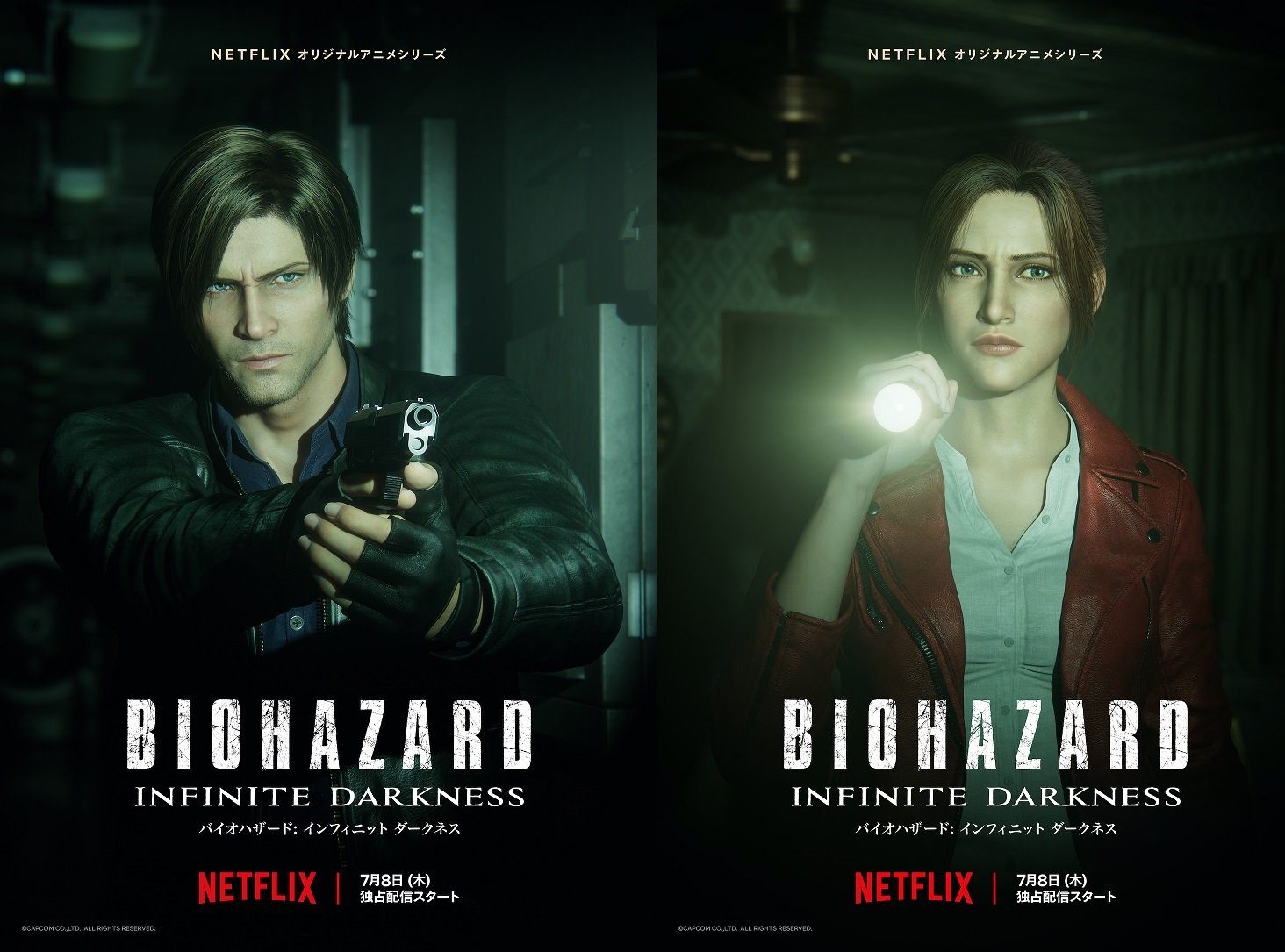 IT LOOKS SO…NAILED! Leon! Claire! The lighting! The backgrounds! THE MoOOoOoOD.

Despite overall quite enjoying the series, the first topic I want to bring up is the *checks illegible notes from phone* social awkwardness between Leon and Claire. And I’m not talking, like, “Oh hey, uh….you! You look…nice!” kind of awkwardness, but the DID YOU FORGET YOU SURVIVED A LITERAL ZOMBIE INFESTED CITY TOGETHER AND ESCAPED TOGETHER AND FOUGHT UMBRELLA TOGETHER WHY ARE YOU BEING SO CLOSED OFF AND WEIRD awkwardness. When Claire and Leon run into each other in the White House there is obviously some familiarity, but things just seemed very off. Was it intentional? Hard to say? It’s very odd to me that Leon fails to mention that there was a, y’know, zombie outbreak in the White House the night before. NBD. Totally has nothing to do with the freaky zombie drawing Claire is showing him. I dunno, it just felt weird that Leon would walk away without even, like, extending an offer to grab coffee to discuss the fuckery of what’s going down.

And that ending? When they’re saying their goodbyes or whatever? That was just tense AF. I always thought things were cool between them, but maybe I’ve been wrong? (ORRRR maybe I secretly wanted Leon to rip off his jacket, scream “SCREW ADA” to the heavens and get with Claire aaaand anything less than that is a disappointment.)

But there was a LOT I really enjoyed about this series. This goes without saying but 99% of the time the presentation was downright stunning, and there were moments when I honestly thought I was looking at real footage from, y’know, the real world. And damn, there were some QUALITY one-liners from our boy Leon. I about piddled my pants when our boy was on the brink of being consumed by infected rodents yet had the wherewithal to mutter: “Wish I had some cheese.”

Now when it comes to any video game film shenaniganry your best bet – and we’ve all learned this – is to chant the following to yourself at least three times: “I’m looking to be entertained. I’m not looking for the next blockbuster hit. I understand there will be plot holes and things that don’t make sense like why the fuck Leon is acting like a weirdo around Claire.” …Okay, omit at least half of that last sentence, but I think you catch my drift. Anyway, that has always been my motto, and knowing that I overall REALLY enjoyed Infinite Darkness. Sure, it was a bit predictable at times, I don’t think the story itself was a massively beneficial addition that important to the overall lore, Jason’s motivation for wreaking havoc was silly and more Claire screen time would’ve been appreciated, but at the end of the day – and this is where those expectations come in handy – it was a fun and entertaining new way to see some of our favorite characters and get to know them a little bit better.

I’ve often wondered what my “ideal” Resident Evil film what would look like. Like, if I could create something in the Resident Evil universe what form would it take? I know for sure I’d want to go the CG route, and I think putting the characters in an infected mansion-type setting (sound familiar?) and watching them try to disrupt whatever evil was going on there and escape would be, yes, super cliché, but I also think it would hit the mark a little more than Infinite Darkness did AND give the film the opportunity to do what Resident Evil is known for – its ability to slowly creep under your skin and unsettle the shit out of you with that atmospheric tension.

I appreciate the attempt to keep us intrigued with new characters and new stories, but I guess at the end of the day all I personally want to see is my favorite characters doing what they do best – shooting bioweapons  escaping from what appears to be the inescapable, all while we, the players/viewers, are one jump scare away from losing our sanity.

Have you watched Resident Evil: Infinite Darkness? Let me know what you thought about it!