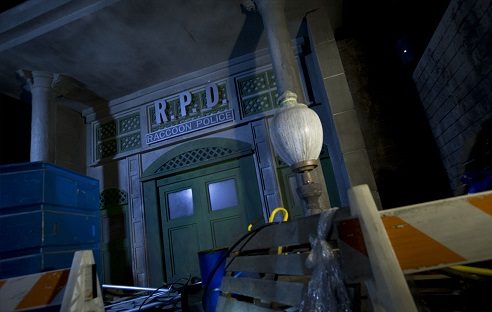 I know I made a HUGE stink about attending Halloween Horror Nights — namely regarding Resident Evil’s house, Escape from Raccoon City, because I was thinking and hoping it would quench that “HOLY SHIT I need to experience IRL Resident Evil!” thirst I’ve had since I was a little girl.

Well, while I’m not going to go ANYWHERE near the term “disappointed” or “lackluster” (seeing as I absolutely loved every. fucking. minute. I spent at Halloween Horror Nights) I will say my thirst for an IRL Resident Evil was only given, like, one or two drops of water. I WANTED AN ENTIRE BUCKET, DAMMIT.

Simply put — Resident Evil: Escape from Raccoon City was awesome and definitely gawk-worthy, but I think I had my expectations set way too high.

I’ve always thought the biggest boner killers in typical haunted houses are the tight corridors and multiple corners. I mean, I get it — you gotta keep the next “set” from being visible as to maximize the fear factor “OOOH WHAT’S GONNA JUMP OUT AT ME!” yadda yadda. But paired with the theme of Resident Evil the layout didn’t do Escape from Racoon City any favors. I know it’s not ideal for the builders,  but I think the house would have SO much better had it taken place in a larger, wider set that takes you down the streets, through stores and into alleys WITH ample room to wander. (Being ushered down narrow corridors single-file didn’t do it for me.)

Again, that’s just me and my high expectations talking. That also concludes my bitching because Resident Evil: Escape from Raccoon City had enough to keep me SQUEE’ing for days. <3. Unfortunately one isn’t allowed to take photos within the sets, but I uh tried my best to snap a few anyway.

Leon and Jill were also featured in the house (like, IRL actors) as well as the Nemesis. I really appreciated that the “zombies” didn’t do a lot of jump-out scares, as that ain’t how it happens. A few dobermans were also throw in there, as well as fun throwback items like a typewriter and random boxes of ammo.

If there’s any way you can get your ass to Halloween Horror Nights and experience the haunted houses (not just Resident Evil’s!) I HIGHLY suggest you do so. Like, hands-down it was one of the best things I’ve ever done with my life. THERE WERE ZOMBIES EVERYWHERE. (Mostly thanks to The Walking Dead’s house, but hey, there ain’t nothing wrong with that.)