“…And now I’m currently on a bus on my way to said Cathedral, where people are supposedly holing up. That is NEVER a good sign. I mean, if there’s anything I’ve learned from zombie lore it’s that any supposed “safehouse” turns out to be nothing more than a slaughterhouse full of human body parts and such. Not good.”

After trekking through the cemetery and destroying a never-ending slew of undead things wielding shovels and such my partner and I finally made it to the Cathedral. However I must point out that it took probably an hour or so to complete this rather easy task for we discovered FUCKING VOICE COMMANDS, BABY. (Okay, I had to Google it, but STILL.) 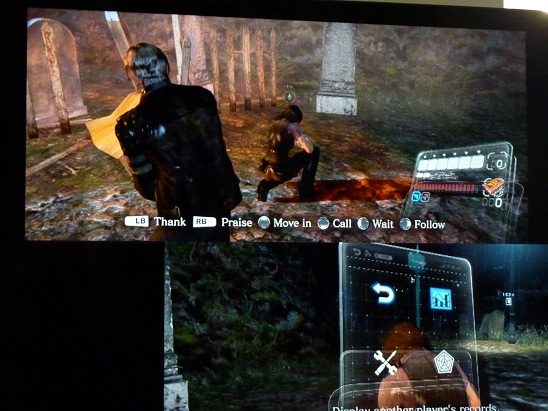 YES. Oh my God. They’re back. Thank you Capcom. The one thing I desired from this game was voice commands and you did NOT let down — I seriously cannot get enough of Leon’s thumb-upping “I’m glad you’re here!” spiel. It’s so cheesy, it’s amazing. Not to mention it never gets old to run circles around your partner as she’s meleeing a shovel-wielding zombie while giving the “NICE!” “NICE!” “NICE!” prompt.

So, yeah, we made it to the cathedral (after having to fend off a kajillion zombie things. Seriously, what are these things? I’m assuming victims of the C-Virus…) and once we were allowed inside, the Tall Oaks Cathedral turned out to be nothing more than an old Spencer Estate-esque puzzle — which I am NOT going to complain about. But more on that later.

Helena said that she had been to the Tall Oaks Cathedral days before and that the big ol’ statue in the back hadn’t been there. Like, there was a staircase leading down and now it was blocked by aforementioned big ol’ statue. So of COURSE this means there must be a way to move it! Yessiree — these folks inhabiting the cathedral were sitting in a puzzle and didn’t even know it. 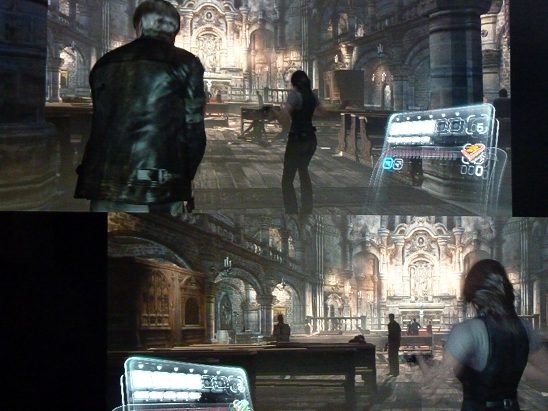 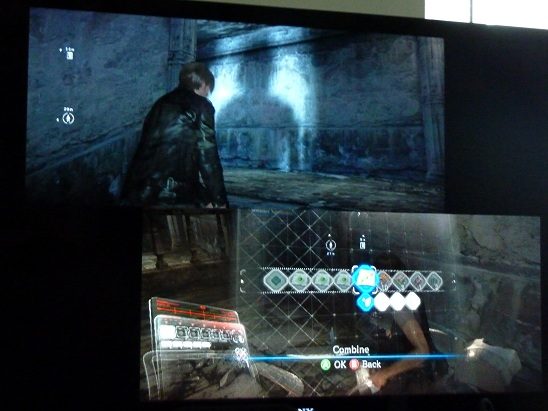 This is when the Spencer-esque shenanigans went down — we had to find scattered Madonna statues and place them on their pedestals. This took a few minutes, and after we were successful the statue in the back of the cathedral moved,  revealing that staircase going down — which is great and all, but it also  revealed this weird-ass monster thing that had skin that resembled shell barnacles. It also, um, sneezed milk (THAT’S WHAT IT LOOKED LIKE ANYWAY) and killed everyone inside. Except for Leon and Helena, of course. I mean, they are the good guys.

After killing Mr. (Miss? Mrs.?) Barnacle we proceeded down the recently revealed staircase and WHADDJA LOOK AT THAT there’s an underground lab of sorts! 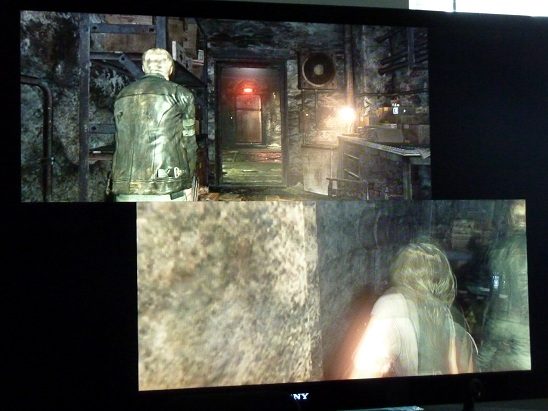 Now, like I said earlier I really dig these puzzles. They give me the warm and fuzzies from Resident Evils of old. After all, they’re never too difficult (which is good for my brain) and I really, REALLY like figuring them out with my partner — since I’m playing local co-op we’re having an absolute blast with it. It makes us feel smrt.

Anywho, Helena ended up spilling the beans that she was looking for her sister, Deborah. Or maybe I learned that because I accidentally looked ahead in the wiki. Anyway, in our search for this Deborah chick Leon somehow stumbled across a video of Ada being squirted out of a body-shaped shell. Yes. In the middle of BumFuckEgypt Leon found a video of Ada naked. You can’t make this shit up. 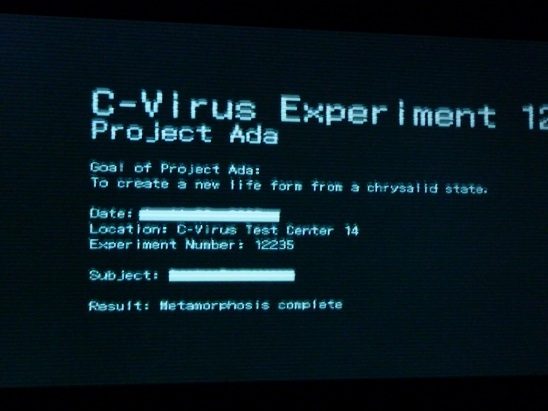 I also discovered Helena has a very fat vagina. 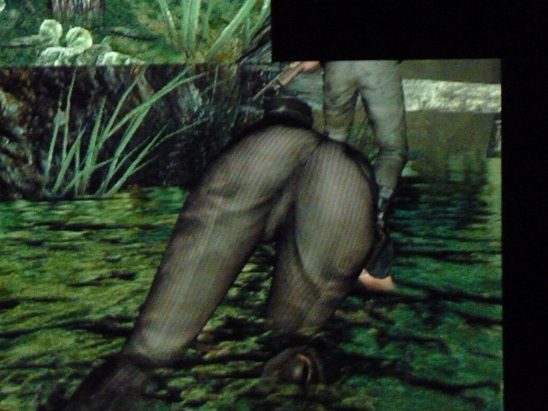 We finally found Deborah, and just like Ada’s video, she was in some deep-ass random part of the underground lab. Unfortunately she had already been infected with the C-Virus. :/ 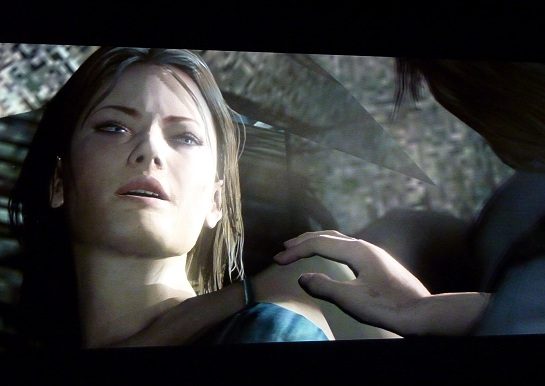 Ada made a brief cameo, in which she shot Deborah in the head with an arrow. I think she was trying to put her down, but it OBVIOUSLY did not work because yeah you SEE what Deborah turned into? She turned into a mucusy veiny bitch. NO BUENO. Needless to say, her milkshake would not bring boys to the yard — especially because we ended up killing her, and no one likes a dead milkshake. Well, most people do not enjoy it. Okay. Moving the fuck on. 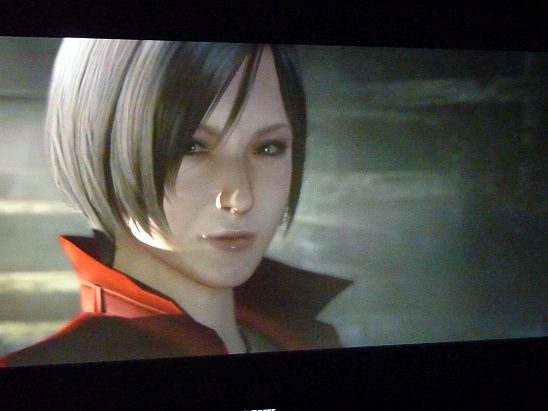 After Ada bounced, Helena revealed to Leon that she was blackmailed by National Security Adviser Derek C. Simmons into aiding the assassination of Benford. And I won’t lie, that sentence came from the wiki because I can’t remember names for shit.

That, ladies and gentlemen, is where I left off. And y’know what? I am loving the SHIT out of Resident Evil 6. I love the puzzles, I love the zombie-esque creature things, I love the co-op. I’m just worried that once I dive into Chris’ or Jake’s campaign it’ll drastically change, but I hope not.

After all, I have voice commands now, so it can’t be TOO bad. >)

OOOH! I ALSO FOUND THE TRIFORCE!!!! 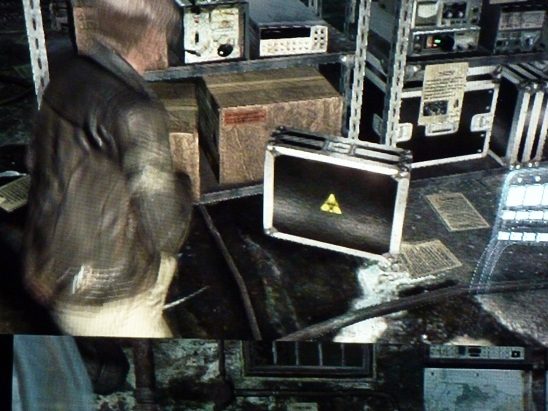