HEYHEYHEY! Guess what? I survived Run For Your Lives!

Well, um, I survived in the sense that I’m sitting here typing this post. I, unfortunately, did NOT survive the entire 5k. I made it a little past the two mile mark (it was roughly 3 miles total) before I was “eaten” by one of the fastest fucking zombies ever to exist. I mean, holy hell this guy was fast and he was after my nuts. And by nuts I mean he wanted my final remaining red flag. (Think of it as Link’s last remaining heart container!)

But allow this zombie bait to rewind a bit. You see, getting to the actual event was an event itself.  Apparently my GPS thinks the corner of “Burnt Ridge and Johnson Road” (ie; the parking lot) equates to that of a dead-end dusty trail which leads to a homeless establishment.

THE GPS IS A LIE. Turns out the actual parking lot was eight minutes down an actual LEGIT road. Funny how that works.  But we finally made it, registered and prepared ourselves  to get chased by ‘dem zombies.

The course itself consisted of a *mostly* linear path that took us through woods, thick mud, took us over hurdles and under fences. Now, you could run with either the fast (appetizer), medium (entree) or slow (dessert) waves of runners. We were sorta-kinda  forced to run with the slow wave (which pretty much means your pace will average a 12+ minute mile) but I SWEAR WE WERE GOING TO GO WITH THE MEDIUM WAVE BUT WE WEREN’T PAYING ATTENTION WHEN THEY WERE RELEASED.

Buuuuut to be honest I’m so glad we ended up running with the slow wave because HOLY HELL I haven’t exercised that much in a loooong time. There were a few times I thought I was going to, ahem *adjusts nerd glasses* need my asthma inhaler.

Anyway, below are some photos from the event. Sadly, I didn’t bring a camera (uh, yeah hi I was running from zombies) so I scoured Facebook and found these gems! Some are from Colorado’s Run For Your Lives event because the “official” photos from WA aren’t available (yet), and some are from my friend’s camera. 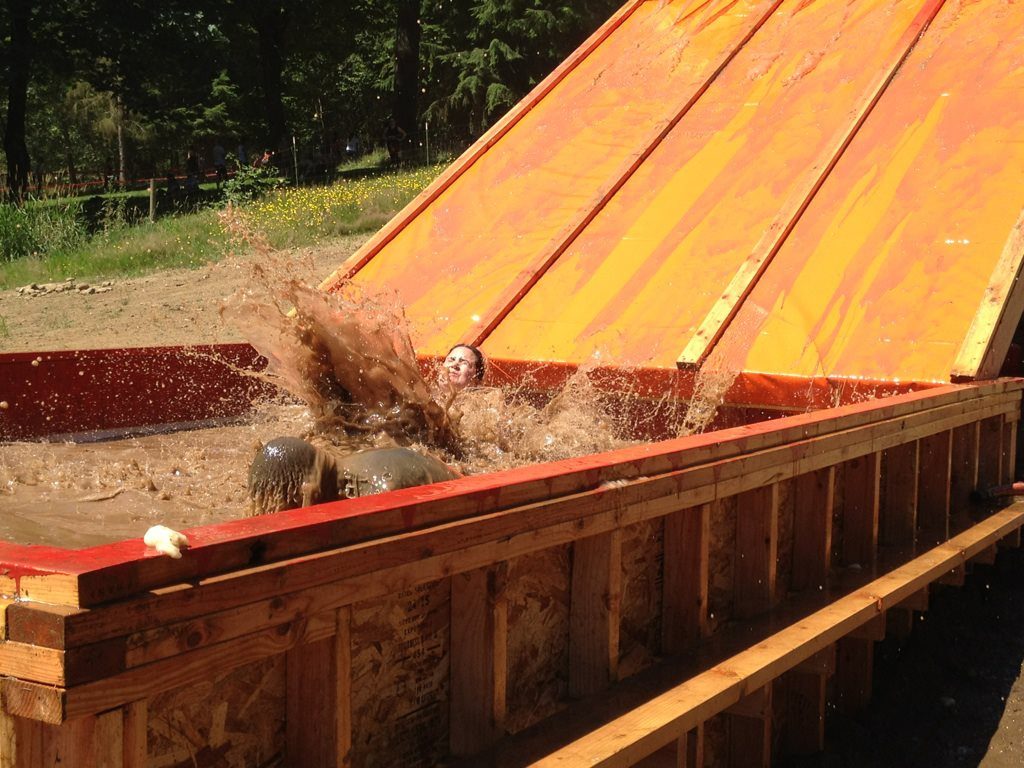 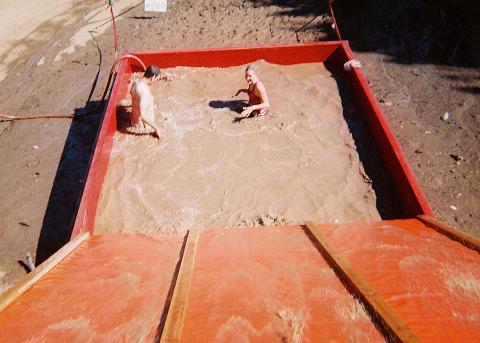 Never have I had so much fun in mud. Seriously, I was caked and it was the best feeling ever — and that best feeling ever may or may not be attributed to the fact it was somewhere around 93 degrees and dipping around in wet goo was like sex. Also, I just said “wet goo” and “sex” in the same sentence. Gross.

Now, onto some of the zombies that were chasing us: 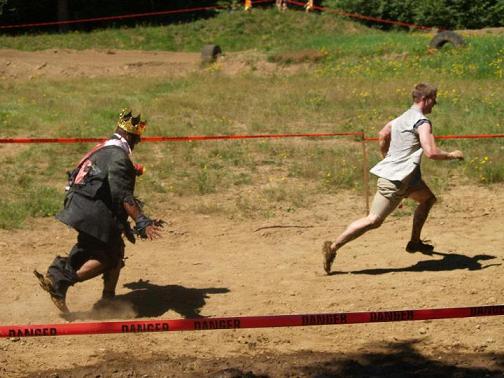 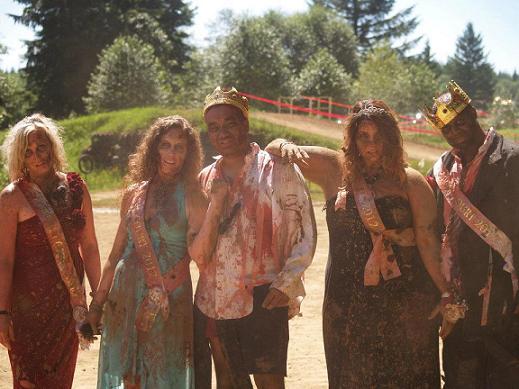 Sadly, these are all of the photos available at the moment, but to give you an idea of what a good chunk of the last part of the course looked like here’s a photo from a past Run For Your Lives event: 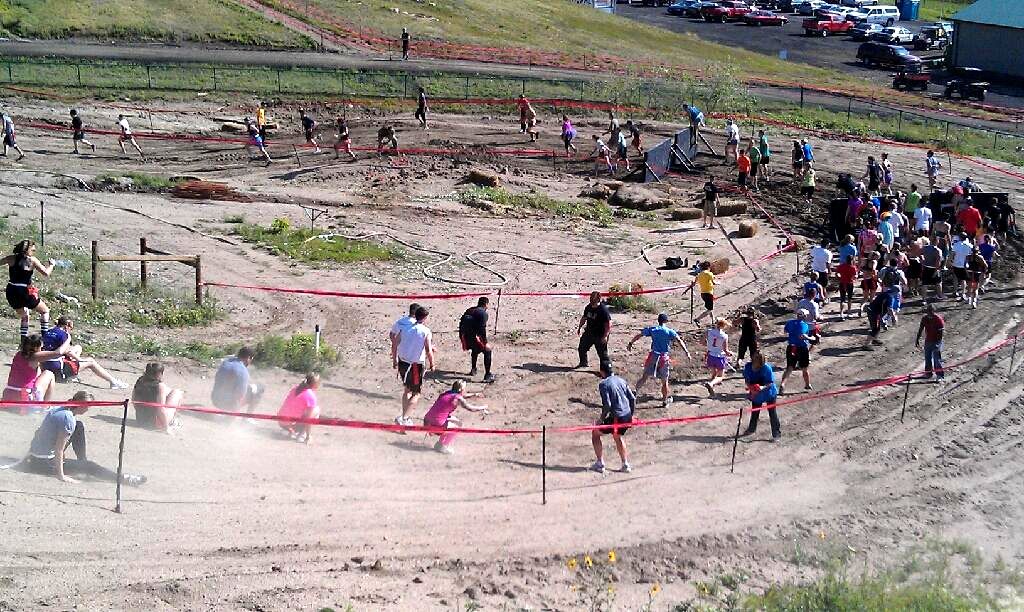 Now that you have a gist of what the entire event looked like, I’ll go back to my tale of becoming zombie bait.

So, yeah, I thought I was doing pretty good — after all, I had made it past the two mile marker and still had two out of three flags remaining. But I quickly lost my one of the two flags when this zombie dude (although my friends SWEAR he was actually a she) like, grabbed my short’s waistband and would NOT let go — s/he actually spun me a good 180 degrees, grabbing my flag in the process. And, finally, I, Brittney Brombacher, succumbed to the zombies when the aforementioned fast zombie from the beginning of the post snatched it away. And that’s all there is to that story, because that’s exactly how it went down. I was SO pooped by that point I hardly had any fight left in me.

Oddly enough, though, after my last flag was taken I felt like a chunk of pressure had been taken off. I was able to walk the rest of the course with my friends and observe and appreciate the zombies. I even gave one a hug and my brosephs took a few photos with some of the zombies.

But for serious, I can’t imagine how anyone would “survive” the entire event — after my last flag was taken there were at least 40 more zombies to get through — but some runners managed to get all the way through unscathed! How does that even happen? You must be some sort of super human or something. YOU MUST BE CHRIS REDFIELD.

Run For Your Lives was so, so, SO much fun, and if you’re considering partaking in the awesomeness during one of their upcoming city stops I highly recommend you do! You’ll also get a helluva workout, should you choose! That was the beauty of this event — you could walk, jog or run (or a combo of all three!) the course. If you felt like you were going to die from heat stroke (like 81% of us did) you could walk the “quiet” parts of the course and sprint past the zombies. Or try to. That strategy only got me so far. ;)

My only suggestion would be to ax the linear parts of the course — ie; the track. I know due to security reasons and whatnot utilizing the track is a safe bet and possibly a necessity (so an eye can be kept on everyone) but there were several parts of the course where there was maybe a ten foot wide track with two zombies covering it, and seeing as these zombies actually have brains it was kind of like, “Oh well, I’m screwed here!” I think it would have been a lot more fun if the course was more open — the parts of the course that took place in the woods was a LOT of fun since you could actually plan strategy according to your surroundings, whereas when it’s just you and a ten foot wide track with two smart zombies it just becomes more of a “capture the flag” experience.

But in any case, like I said above all of us had an absolute blast and had it not been for the sweltering heat, blisters and utter exhaustion we would have liked to have ninja’d our way into another wave and gone again.