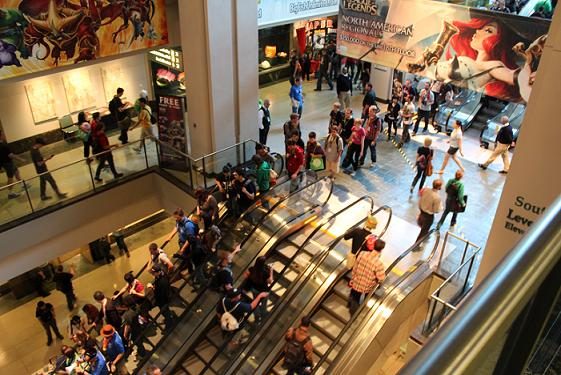 So this thing called PAX Prime 2012 is over, and I have a million and a half things to blog about. In fact, the amount of aforementioned things to blog about might equate to a million and three quarters. For serious — I have photos, impressions, swag to give away and even have a video of yours truly fangirling out of the Oculus Rift. (By the way, that thing is totally legit and I’m SO stoked for it!) I expect to have  ALL OF THE THINGS up by the end of this week, so make sure you keep checking back!

But in a nutshell, PAX Prime 2012 ranks in the top five conventions I’ve been to. Nothing was necessarily different about the main components — the show floor setup and whatnot was pretty much the same as past years (in fact, I’d say it was a little underwhelming) and there weren’t any panels that really stood out and forced me to do back flips all over the convention center (minus  the autograph session by Ali Hillis!) BUT the friggen’ people I met and were able to chit chat with were simply amazing and made PAX really stand out this year.

I’ve said this all along, but I’ll say it again: What makes PAX so enjoyable are the people that attend and make the PAX atmosphere what it is. The energy buzzing around the show floor (and, hell, the entire convention) is electrifying. Sure the games are fun to dink around with (if standing in two hour plus lines are your thing!) but without the 70,000 + attendees it simply would not be PAX. Period. So with all of that being said, I want to thank everyone who saw my dorky ass wandering around on the show floor, stopped me and said, “OHAI!” — I want to thank everyone who messaged me on Facebook, on Twitter, and I want to thank those of you who patiently waited in one spot while I bumrushed my way to you so we could finally meet up! YOU. MADE. MY. LIFE.

But switching gears a bit…well, kinda…

I thought it would be a super duper awesome spectacular idea to have BlondeNerd.com t-shirts made for PAX. I obviously wouldn’t expect anyone to pay for them and figured it could be a fun promotional thing to hand out on the show floor, nah’ming? But after checking numerous online t-shirt printing shops I, uh, found out that I’d have to pay somewhere around $30 bucks per shirt.

EFF. THAT. NOISE. Eff it hard.

Therefore I figured I could get all crafty and purchase some special iron-on printing paper. After all, it would save me a LOT of money and, although I’m not crafty AT ALL, I thought it could be kind of fun! I mean, what could possibly be hard about printing your logo and URL on special paper and ironing the designs on cloth?!

Not only did I iron the URL backwards, I managed to iron it on upside-down and when I put the tank top on and the text stretched across my breasticles the art cracked and, um, tore.

It looks like I’m going to have to buckle down and purchase expensive t-shirts after all. Be on the lookout for those in 2017, when I’ll have saved up enough money to purchase about four or five of them.