I beat Portal last night! You guys were right—it only took me about three hours.

There isn’t much to say in terms story. Your character Chell wakes up in the equivalent of human rat-maze, aka the Enrichment Center for Aperture Laboratories, with a kick-ass piece of Aperture technology called a PORTAL GUN! Upon seemingly coming to the end of the test, maze, or whatever you want to call it, Chell is almost “accidentally murdered”. She then knows GLaDOS is corrupt and ultimately destroys her. THE END.

So, I’m going to post pictures I took during my three hour extravaganza and write about ’em a little.

Portal was one of the most  innovative games I’ve ever played. What a friggen’ cool concept, but I won’t lie—at first, my brain hurt. I couldn’t quite understand how the portal gun worked (and that was when I only had the blue one!) but it was still fun to run around, oblivious as to what I was actually doing.

It took a while for me to grasp the idea and mechanics of the portals, but once I did—the game threw me for another loop. I had a feeling I’d acquire the orange gun at some point. But y’know, I like to consider myself a video game master and all that so I mastered the double-fisting rather quickly. With both colors in hand, I felt like I was REALLY playing Portal. I’ve been hearing about Portal for years now, but I never enjoyed the game for myself. So yes, it was  big deal when I had both colors on my screen and yes, it was totally picture-worthy. 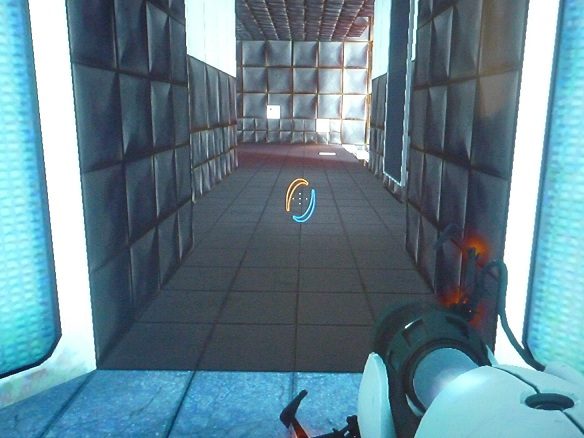 The puzzles started out simple enough, but once some brainpower was actually required I found myself making trivial errors. Unfortunately, this lead to a lot of crazy camera angles and rapid spinning. Guys, I started getting motion-sickness. I NEVER GET MOTION SICKNESS. The level below caused a lot of heart—and stomach—ache. 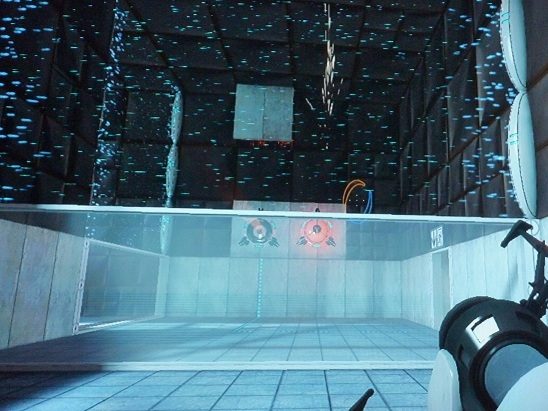 Now, can we please talk about my favorite part of Portal?! PLEASE?!?!!

These lil’ turrets are officially the cutest things ever. They’re these killer-bots but ohmygod. How could anyone harbor any hard feelings towards these guys? They have the cutest little voices and say the cutest phrases. All I know is that I want one in my living room, but instead of bullets I’ll program it to fire hot wings <3. 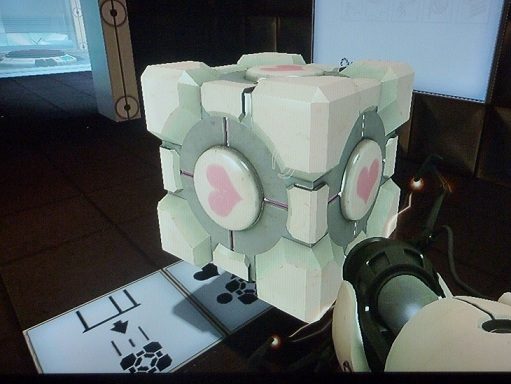 IT’S THE COMPANION CUUUUBE!!! Holy moley, I found myself being a total weirdo and actually feeeling BAD when it came time to incinerate it. I thought the commentary from GLaDOS was hilarious,  especially when she warned me not to become too attached to the cube because it’s an uh inanimate object. I did anyway. I DON’T CARE. I also laughed like a crazy person when I stumbled across this room:

But then it came time to do the unspeakable.

Other than meeting the infamous companion cube, I had also been looking forward to coming face-to-face with the origin of the “The cake is a like” meme. My leftover feelings of sadness from toasting Mr. Cubie were replaced with feelings of extreme joy when GLaDOS promised me “there will be cake”  at the end of the experiment. 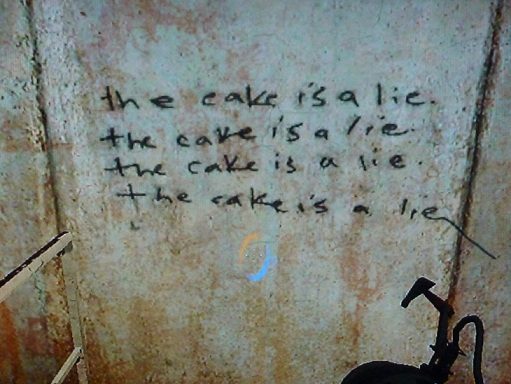 YESSSSSSSSSSSSS. At that moment, I felt like I had graduated in gaming academy or something.

As I ventured on, I came across another wall that made laugh.

When it came time to destroy GLaDOS, it took me a few times. It was probably because I was brain dead by the time I reached her. Or maybe I just sucked. Either way, when I finally toasted her electric bits I was handsomely rewarded.

So, what’s there to say about Portal other than what’s already been said? Clearly, I suck at life for never having played this game until last night.  Honestly it was just what the doctor ordered—it was simple, fucking hilarious (I love sarcastic humor and can’t remember the last time a game contained so much of it) and it was just REFRESHING.

Needless to say, Portal 2 is at the top of my list of “Games-Britt-Will-Buy-Instead-Of-Playing-The-Games-She-Already-Owns”.