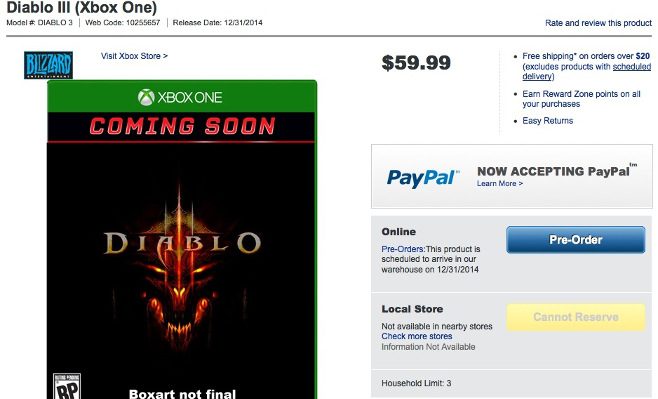 This would be some bomb-ass news.

Canada Best Buy and FutureShop recently had Diablo III listed for Xbox One, complete with a fancy “COMING SOON” header atop the boxart. The removing has since been removed, BUT THE SAME CANNOT BE SAID FOR MY HOPE. I will never lose hope. Diablo III will come to Xbox One or my name isn’t Brittney Alistair. (Which it, uh, isn’t. This does not bode well…) Regarding the listing, Blizzard has told IGN, “One of our goals is to bring Diablo III to as many players as possible, but we don’t have any other platform announcements to share at this time.” DAMMIT I KNEW IT.

But seriously, while that’s not the most encourage news, I don’t see any sensible logic in keeping this bad boy away from Xbox One owners. Methinks it will hit Microsoft’s machine eventually, and IT BETTER. ;____; You see, I recently finished Diablo III on the Xbox 360, and I would love nothing more than to be able to transfer my beautiful barbarian, Buttsex, to the new and shiny version. The replay value of that game is friggen’ ridiculous and you BEST believe I’d gladly devote several more hours of my life to it.

Generally “rumors” that start out this way end up being true, but I’m still going to keep all of my limbs crossed and whatnot in hopes they bring more likelihood to this situation.

Now that we’re sorta-kinda on the topic…

What was with all of the Diablo III hate? I know about that infamous “error 37” that caused a lot of heartache for folks, but now that’s over and done with (at least I assume it is) do people generally dislike like Diablo III? I feel like whenever I posted something about it — whether on Facebook, Twitter, etc. — the majority of responses I received were “HUGE DISAPPOINTMENT!” “DIABLO III SUCKS!” “YOUR MOM!”. Perhaps the console version is easier to navigate or something, I dunno, but I sincerely, sincerely enjoyed my time with it.