Announced during PAX Prime, Saints Row: Gat out of Hell is an open-world sandbox title of awesome proportions. Seriously. Johnny Gat and Kinzie find themselves in New Hades, Hell in search of *your* president from Saints Row IV who has been whisked to the underworld to marry the daughter of Satan. Yeeeup. Doesn’t this sound fucking glorious?!

Gat out of Hell is a standalone expansion coming to Xbox 360, Xbox One, PS3, PS4 and PC next January. “It is not a Saints Row V. It is not a sequel,” studio creative director Steve Jaros told Destructoid. “It’s a fun thing for our fans. A new place to go and play around with super powers. Another city to go and terrorize. [A chance to] play as a character that people really seem to dig, and just have another excuse to have a lot of fun and do some shit that we’re able to get away with.” 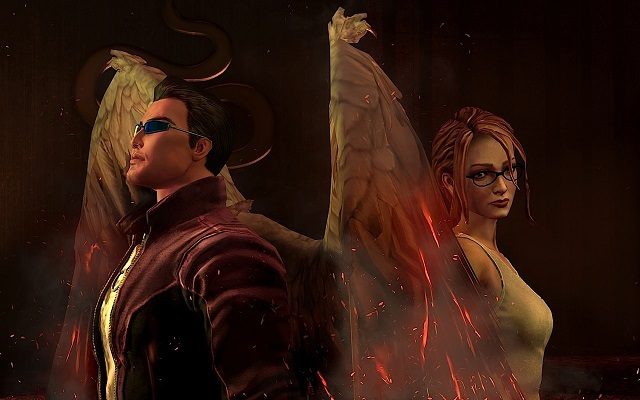 I played a bit of Gat out of Hell at PAX last weekend. And uh guys the weapons are nothing short of hil-fucking-arious. Every weapon is inspired by biblical stories and whatnot. There’s the locust Uzi, a frog launcher, armchairageddeon (basically a rideable recliner armed with missiles and rockets) and more. There’s also a worship button (which causes the “folks” of hell to temporarily worship you) and detonating imps. Seriously, I don’t think it’s possible for this game to be any more Saints-y.

Gat out of Hell will also release bundled with Saints Row IV: Re-Elected — an Xbox One and PS4 re-release of Saints Row IV — on January 27th, 2015.

As Jaros puts it, “It’s a whimsical, weird fucking game.”