Lately I’m ALL about top-down dungeon crawly co-operative goodness. And by that I mean the last two games I’ve played have been top-down dungeon crawly co-operative goodness (Divinity: Original Sin and Diablo III). SoOoOOo when Square Enix reached out and was all, “OHAI wanna play Lara Croft and the Temple of Osiris at PAX Prime?” I JUMPED AWN’IT LIKE A SONFROG. (I don’t even know what that means.) 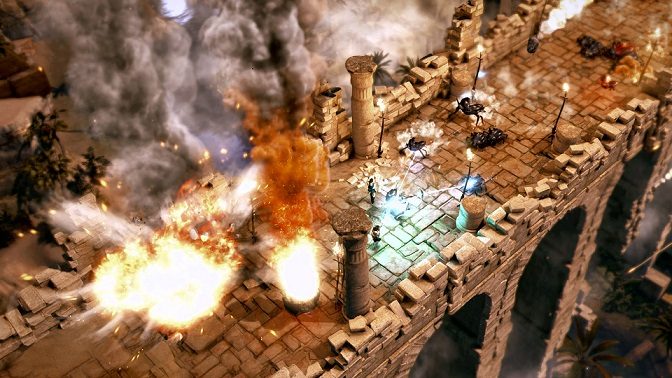 Lara Croft and the Temple of Osiris is the sequel to Lara Croft and the Guardian of Light — a game I, unfortunately, haven’t had the pleasure of playing. (I told you I’m just *now* getting into the top-down dungeon crawly co-operative goodness!) But now that I’ve had hands-on time I’m hell-bent on clearing some space in my schedule, playing Guardian of Light and being primed and ready for Temple of Osiris when it launches this December.

Most of the top-down games I’ve played (Baldur’s Gate, Gauntlet, Diablo, Divinity: Original Sin) take place during a medieval-esque setting and thus Temple of Osiris is a bit different than what I’m accustomed to. But that’s totally okay. It’s fun having, y’know, guns to shoot. Not only that, but Temple of Osiris (and from what I’ve heard, Guardian of Light) is jam-packed with puzzles that require co-operative teamwork, something I wish other games had more of. During our demo we helped our teammates cross ravines, crawl up ledges, open doors, etc. In order to be defeated, some enemies required timed shots from each party member, and certain puzzles required the participation of each player (such as stepping on pressure plates and whatnot).

I’ve found a snippet of the demo we played on YouTube, courtesy of IGN:

Despite only having 20 or so minutes with Temple of Osiris, I’m freakin’ sold. The controls were tight, the shooting was easy, a few of the puzzles had us scratching our heads — all in all, myself and my fellow co-operative teammates had a grand ol’ time. Look for Lara Croft and the Temple of Osiris on December 9th for PC, PlayStation 4 and Xbox One.