Claiming to have Zelda-like dungeons with a deep, Persona-esque story that maintains a tone akin to of the darkest parts of EarthBound is quite the statement, right? I mean, should something like this manifest, it’s basically perfection.

The combat definitely feels a bit like EarthBound in the sense combat stats are called HP and PP. The game text also has that same, dry sense of humor you can find in EarthBound. For example, after I defeated a rat I was greeted with “The Rat is pushing up daisys!” Or when I’d rad a critical hit, “Radicle!”

That said, there are some stark differences. You’ll be able to have eight party members active during combat, and according to the team each player will control much differently than the others. QTEs are also involved in combat, as every time a rat or whatever would attack me I was given a split-second QTE to press A at just the right moment. If successful, I would avoid part of the damage. It was a bit tricky to get down since it happens SO quick, and unfortunately I missed enough QTEs that I perished at the hands…er, claws of rats.

I didn’t get much time with the playable dungeon, as aforementioned bastard rats killed me dead shortly after I entered. I can tell you, however, that this dungeon required the use of a stuffed Panda. (Seriously.) This Panda could be placed on switches at the press of a button, and could be removed by pressing the same button. Once placed, you can’t move the panda, only remove and replace. 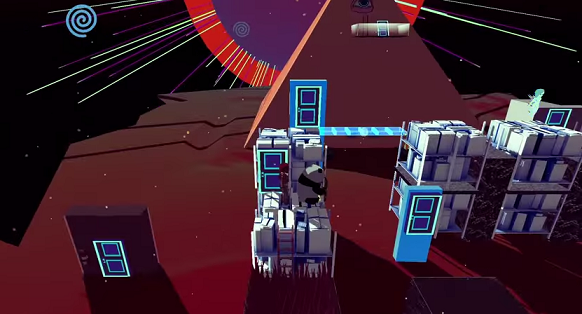 The panda can also be used as a bridge of sorts, as you can step on its head to cover gaps. (To see the panda in action, as well as the dungeon I was romping around in, check out the above video footage from 1:42-1:57.) Outside of dungeons, the panda can be used within combat as a temporary shield.

I still can’t tell if YYIIK: A Most Modern RPG will live up to its bold claims, but I will say it shows promise and potential. I can’t wait to see more. Hopefully we’ll have more to go off of before YIIK: A Postmodern RPG launches this winter for the PSVita, PS4, Windows, Mac and Wii U.