I don’t know HOW these trips fly by faster than…uh…hold on, I need a metaphor — faster than my underwear at an Alistair convention (…what?) but they freakin’ do. Yet again another PAX is over and I’m yet again sitting on my ass in sweats, disheveled hair and missing it all like crazy. But good times were definitely had so I shall not fret, and instead shall look forward to the next gathering(s). (E3, PAX Prime, PAX South…)

I flew in Wednesday night because I was determined not to encounter the SNAFU I faced last year, which consisted of yours truly flying into Boston too early on Thursday via a red eye and having to sleep in the hotel lobby. It was the WORST. Anyway, Wednesday night pretty much consisted of an ah-freaking-mazing buffalo chicken burger and copious amounts of sleep. Thursday afternoon a few of us meandered to the convention center to scope shit out and pick up our media badges. 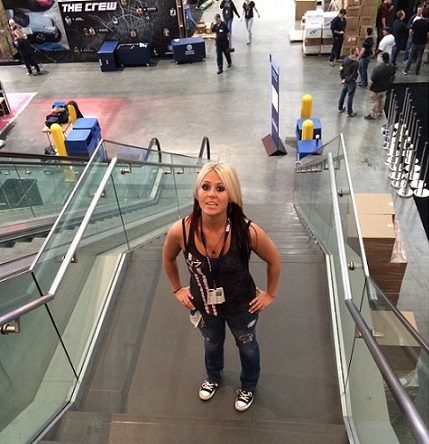 As some of you may know, I do a little behind-the-scenes social media work for Operation Supply Drop, so I had an exhibitor badge at my *temporary* disposal. I’d never seen the show floor during setup, so I took a gander and holy CRAP it looked like a war zone down there. (I probably tripped over boards and plastic and air like, 34 times.) But it was nice to get the lay of the land. And speaking of, there wasn’t a lot of land to get the lay of. PAX East was pretty damn low-key this year (thanks to where we are in the console cycle and E3 right around the corner) with a TON of indie presence, whiiiich admittedly was very, very nice. But anyway, after snatching our media badges, exploring and humping the BioWare Base sign it was time to head to a Nerd Appropriate gathering. 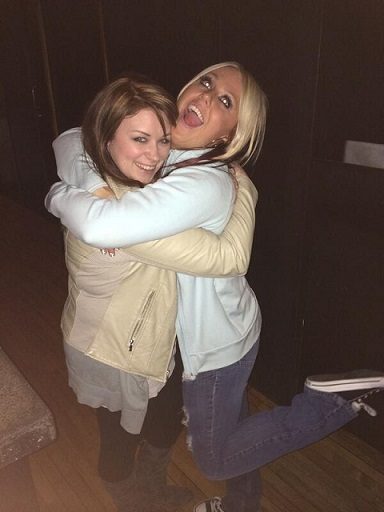 Ladies and gentlemen, meet Karissa. She’s the creator of the Mass Effect Cosplay Initiative, which benefits St. Jude Children’s Research Hospital. We’ve been talking on Twitter for, man, FOREVER and we finally were able to meet and embrace and swap skin cells. But anywho, after hanging out and chit chatting with her and others it was time to head to a little shindig Billy Nichols was throwing. 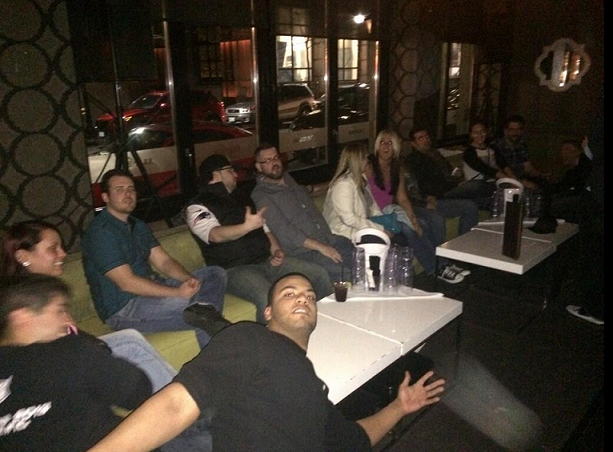 I didn’t know it right away, but I was surrounded by people I had been talking with on Twitter for YEARS. So, there was a lot of that, “OMG! HEY!” “HOLY SHIT I DIDN’T KNOW THAT WAS YOU!” and “CHEERS AND BUTTSEX!” going on. What’s so fucking cool about meeting everyone for “the first time” is the chemistry you have online translates into IRL. Know what I mean? There wasn’t any of that awkward silence or anything. Could have had something to do with the Grey Goose, but I digress…

And Friday was the first day of PAX!

Here’s what I went hands-on with:

Diablo III: Reaper of Souls on PS4: I’m a HUGE Diablo III fan. I can’t say I’ve played the others, but Diablo III hooked my brain and my heart, and words can’t explain the amount of fun I had playing co-op. So, yeah, I’m absolutely waiting for Reaper of Souls to come to the consoles. The game, well, looked and played like Diablo, so there really isn’t a lot to talk about on that front. Fingers crossed for an Xbox One port! >_<

The Evil Within: Chances are you’ve already heard musings about the PAX demo, but here’s my two cents. The demo was lifeless, repetitive and didn’t show much of anything that would convince the average gamer to purchase the title. That sounds a bit harsh, but damn if it isn’t true. Our main protagonist, Sebastian, seemed void of any personality or, you know, life as he wandered this city that was crumbling all around him and zombies were trying to get at him and (I’m assuming) tear him apart.

Sure, the game looks a bit freaky and unsettling, but any game can look freaky and unsettling. It’s the gameplay that makes it stand out and be desirable, right? Anyway, all of that being said, I’m still keeping an eye on The Evil Within because I happen to like cheesy horror games with a hint of cult Resident Evil awesomeness.

Evolve: I didn’t go hands-on with Evolve, but the informational game demo we saw made Evolve looks fun as ballsacks to play. From what I gather there will be an option for AI, which is AMAZING because that’s a thing Titanfall doesn’t have and I can’t play online with strangers for very long because it causes me to feel this thing called anxiety which causes me, well, anxiety. It’s fucked up, man. Anyway, because I didn’t actually play the game, check out this hands-on impression from the folks at BuzzFocus.

And, erm…I think that’s all I played/saw at PAX East. I had a few appointments on Saturday, but I woke up with a bitch-ass swollen left eye. Like, how does that even happen?! I don’t even want to think of what I touched the night before that would cause such suck. Ahem. But like I said earlier, the show floor was pretty chill this time around, and unless you made a million indie appointments there wasn’t a heckuva lot to see/do/play/romp/touch/caress. Admittedly I was more focused on meeting people than I was writing previews and, well, working. BUT CUT ME SOME SLACK E3 IS RIGHT AROUND THE CORNER.

As always, PAX was abso-fucking-lutely amazing. Next up? E3, SDCC, PAX Prime and PAX South! Who will I see where?! :D