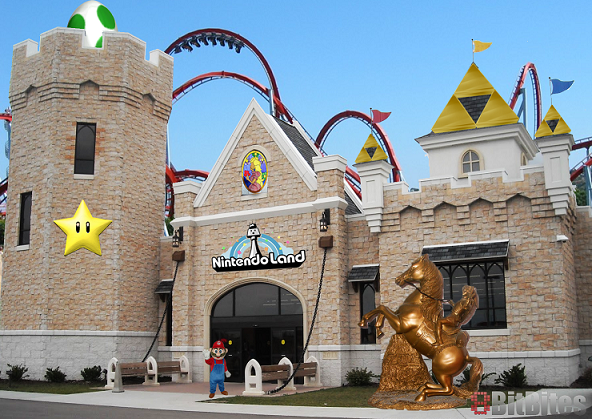 GUUUUUYS!!! Nintendo and Universal studios are partnering up to bring Nintendo themed attractions to Kyoto, Japan and Orlando, Florida. This partnership will bring “spectacular, dedicated experiences based on Nintendo’s wildly popular games, characters and worlds.”

“The immersive experiences will include major attractions at Universal’s theme parks and will feature Nintendo’s most famous characters and games. More details will be announced in the future, as the Nintendo and Universal creative teams work to create specific concepts.” Nintendo stated in their PR.

OH. MY. GOD. OHMYGOD. Am I, like, the ONLY one freaking out over this? BECAUSE I AM FREAKING THE EFF OUT.

Video game attractions are things I’ve wished for ever since I was in elementary school. But if I had to narrow it down to one major company, Nintendo would definitely be the one I’d want to actually, y’know, DO IT. (In all honesty I’d much rather see Nintendo build their own theme park on its own property, but hey, beggars can’t be choosers.)

If you need me, I'll be here, waiting for the day when publishers band together to construct a video game theme park.

This is sooo fun to think about. WHAT KIND OF RIDES WILL THERE BE. There better be, like, a Luigi’s Mansion version of Haunted Mansion. OMG. Mario can have a crazy rollercoaster because like of all of the jumps he does and stuff. BUT WHAT ABOUT THE LEGEND OF ZELDA?! Omg. Would they concentrate on Hyrule Field and turn the ride into something that highlights all of the radthings you can find there? Or maybe they’ll focus on an iconic dungeon, like the Water Temple? “SURVIVE THE CRAZY-ASS ROLLERCOASTER CALLED THE WATER TEMPLE OF SUCKAGE.”

Eff me, I’d love to be a fly on the wall during those meetings. Spout off your ideas below!