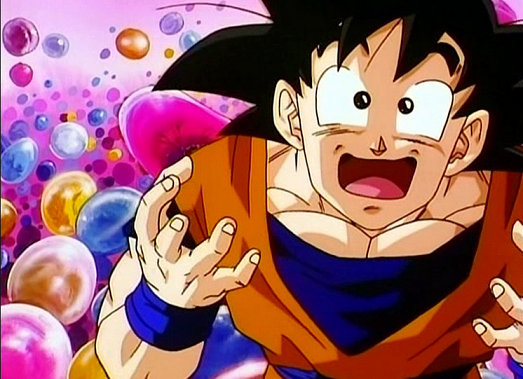 **Update: This was written in April of 2015. As of right now, Japan is already deep into this series, and I am forever jealous and sad I never learned Japanese. The English dub is coming in mid-2016.**

It’s been a whopping 18 years since we’ve seen any fresh Dragon Ball content, from a television series standpoint. AND I DON’T EVEN KNOW HOW TO GIVE THIS INFORMATION TO YOU BECAUSE I JUST WANT TO WORD VOMIT IT ALL AT ONCE BECAUSE IT’S SO FUCKING EXCITING.

Okay okay okay. This July, Dragon Ball Super (confirmed Japanese title, English title is tentative from what I’ve heard) will debut Sunday mornings in Japan via Fuji TV. Dragon Ball Super takes inspiration from the Dragon Ball manga, and will take place a few years after the defeat of Majin Buu, when the Earth is yet again peaceful and free of assholes. (Needless to say that will probably change quickly as the series progresses.)

Akira Toriyama, series creator, is handling the story ::jumps up and down with glee:: and thus we can expect to see iconic characters such as Goku, Gohan, Goten and others make a return. Of course, we can expect Toriyama’s awesome rad and creative mind to come up with some new characters, locations AND baddies as well.

“As I read the plot [of the series] I’ve already received from Akira Toriyama, my dreams for this begin to expand. An enemy even stronger than Buu or Freeza may appear…” said Fuji TV producer Osamu Nozaki.

GUYS. I don’t even know. I can’t. This is honestly some of the most exciting news I’ve heard in a long LONG time. Like, Dragon Ball, DBZ and DBGT were a staple of the entirety of my teenage years. EXAMPLE TIME: When I was 14 I was on the fence about wanting to play for the high school soccer team. (Uh, hello, I had video games to come home and play.) My dad, in his infinite wisdom, told me if I played he would buy me every Dragon Ball Z VHS (DVDs were rare and expensive back in those days) until the series ended. (Hey, he was trying to get me out of the house and active. Can’t blame the guy.)

I joined the soccer team the next day.

That turned into a treasured monthly tradition of trekking to the mall together, purchasing newly-released VHS’s, pre-ordering the next installments, and immediately coming home to watch them.

Maaaaaaaaaan. This is so goddamn exciting. I’m hoping my dad and I can start a new tradition with Dragon Ball Super. Unfortunately there isn’t any news about it coming over these here parts, but you know it’s going to happen. Just…hopefully sooner rather than later! ALSO I WANT TO SEE ART. I WANT TO SEE PICTURES. WAAAAAAAH!!!