Thanks to the past two “woman cave” videos, I’ve been able to, ahem, scrub the floor in my woman cave. Kind of. I mean, it’s still technically a mess but it’s a vast improvement over what it was. 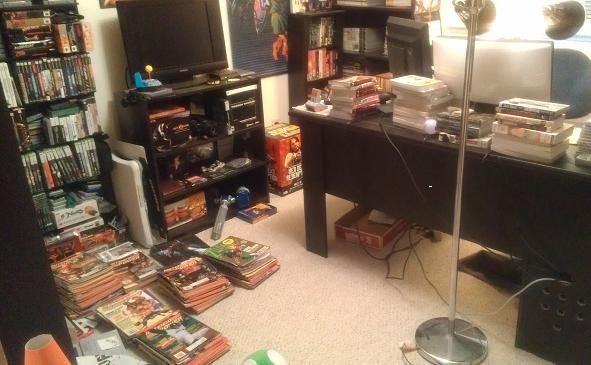 I don’t have that many loose games floating around. (Minus the gaggle of PS1 titles I had to omit from my last video due to stupid audio sync issues. Those will be in the next video!) And this is a good thing, because I really, TRULY don’t have any more shelf space. I don’t know what I’m going to do this summer during garage sale season when I inevitably bring buttloads of ‘dem vidjagames home. I’ll probably tear down a wall or something. That’ll be fun. RAMPAAAGE!

So no, the games aren’t an issue for now. But what I am scratching my head over are those magazines you see on the floor. I don’t know where to put them. I’m scared if I stack more on the shelf it’ll topple over as the boards are starting to bend in the middle. Yeaaaah. Bins are always an option, but EW. That means they wouldn’t be on display! And what’s the point of having a woman cave if you can’t display its contents loud and proud?!

Yeah. I totally went there.