My Xbox 360 has returned from Best Buy! Well, I guess I should say “a” 360 has returned. It’s not the same one I sent in two weeks ago – it’s a refurbished console. So much for buying a brand spankin’ new console a few months ago…

And to clarify, I’ve had it for about a week and a half. Also, it’s not, uh, hooked up yet. 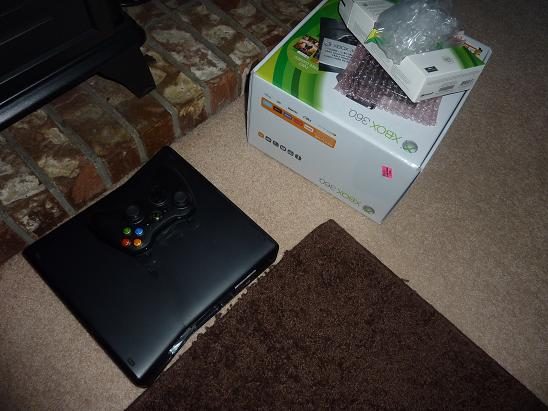 As the photo proof depicts above, my 360 has been sitting on the carpet for the past several days –which I’m sure is NOT good for it — and it always makes me sadly sigh every time I walk into my living room and see it chillin’ there. I’d obviously be lying if I said I was biting at the bit to get this thing hooked back up again. Shouldn’t I be like, raging around my apartment in a fury of hooking up cords and wires and whatnot? Especially since I’m only two hours away from finishing Mass Effect 3? And that brings me to the latest thing stressing me out: Mass Effect 3.

I think more stressed about having to *finish* Mass Effect 3 than I am stressed about the supposed shitty ending I’ll endure ( I’ll touch on this in a a minute). It’s the feeling of having an uncompleted project that I know I’m fully capable of finishing, but I can’t seem to muster up the motivation to do it. I mean, Mass Effect 3 has MORE than delivered and has MORE than satisfied me as a gamer, but this little break I’ve taken almost makes me feel as if I’ve mentally checked out, you know? Also, all of this talk about the shitty ending has REALLY affected my motivation to finish the game. I know that’s absolutely ridiculous, but I think it’s more on a subconscious level. At least I acknowledge it.

Also, it doesn’t help that my free 3-month trial of XBL Gold expired whilst my 360 was being fixed. =__=. I still need a few more online matches before my galactic readiness is over 5000.

That being said, I know I need to finish it. I haven’t played the trilogy just to stop a few hours before the finale. Also, I’d rather experience MY own personalized ending before it gets spoiled for me by someone.