Having been an owner of L.A. Noire since release, and having, um, not removed it from the shrink wrap since aforementioned release, I was considerably surprised when the first trailer for Murdered: Soul Suspect drew me in hard. I mean hard-hard. And after watching a 25-minute demo today, all I can say is I want it even harder.

The demo took place from — I assume — towards the (if not THE) beginning of the game, after our dead hero Ronan discovers his body on a street in Salem. What a weird thing. Think about it: Ohai body, nice to see you from the outside looking in and DAMN YOU LOOK FIIIINE. Minus those bullet holes in your chest, anyway.

I love love LOVE the concept of possessing humans, eavesdropping and manipulating Ronan’s surroundings to complete your investigation. During our demo, Ronan was exploring an apartment, looking for clues regarding his own murder, when he stumbled across a ghost-chick pleading for his help. She had recently become worm-fodder and couldn’t find her body, and the only thing she remembered before going tits-up was sharing her company with an “old couple”. Conveniently enough (gotta love gameplay demos), minutes prior we had stumbled across an old couple hanging out on the first floor.

After walking through the walls into their apartment (#1 perk of being a ghost!) Ronan possessed the old man and the old woman, got into their heads, listened to their thoughts and learned that poor ghost-chick’s body was in a rock quarry several miles away. And that’s just one of the several ways Ronan used his ghostly abilities to discover facts and clues. By possessing humans you can see through their eyes, read their thoughts and search their minds for information. You can also manipulate your surroundings (in our demo Ronan powered on a stove and lured a woman towards him) and fulfill that dark fantasy you’ve always had of fucking with the living. …What do you mean, you don’t share that same fantasy? Well, this is awkward. 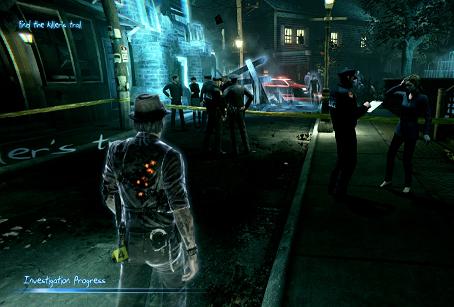 After enough clues and facts have been collected Ronan can make a deduction. When it’s time to make a deduction, random facts you’ve discovered will pop up and you must then pick out relative facts, place them in chronological order, etc. If you’re successful a cutscene will play, taking all of those facts you collected and mushing them into a nice chronological scene that makes sense.

The only thing I’m kind of dreading about Murdered: Soul Suspect are the friggen’ demons — AKA the enemies in the game. (Besides, you know, the man that murdered you.) THEY ARE SO SCARY AND MY MIND IS SO FRAGILE. The worst (but best?) part is you can see them lurking in rooms all around; you just have to sneak up behind them and, uhhh, tear them apart from the inside. It ain’t pretty. A fun lil’ fact about the demons is that they were once regular ghosts, but they slowly devolved and became tormented, twisted fucktards who believe consuming ghosts will return them to their formal selves.

I cannot wait for Murdered: Soul Suspect to enter my life. Also, I have a crush on Ronan. COME TO ME BABY. ENTER MY 360 SLOT.