Disclaimer: this post has nothing to do with buttsex, but I was looking for another word to insert into the title, and, well, buttsex just felt like it belonged.

Wow, guys. The past week has been an absolute WHIRLWIND.

After flying home from E3 I had a mere day or two to recover before my dad was whisked away last Tuesday for back surgery. I’m ecstatic to report he’s recovering super amazing-like, but nonetheless he had his friggen’ BACK slashed open and operated on so he’s sorta-kinda crippled at the moment. (And I say “crippled” with love because he’s one of the most active people I know, so I have to give him shit when shit is due. Also you gotta keep ’em smiling. I CALL IT TOUGH LOVE.) Sooo I’ve been doing my daughterly duty by spending most of my days at my parents’ house helping my mom take care of  Mr. Cripple Brombacher. But like I said, he’s getting better and better every day and it shouldn’t be long before he’s doing backflips, frontflips and madly kicking his legs around while playing Peggle. Ha, that reminds me —  I had to take Super Mario World away from him in the hospital because he was jerking his body too much.

The other thing that’s a thing in my life is MOVING. Gah, guys — I forgot how much moving sucks. Don’t get me wrong, I’m stoked to live in my new place, but damn. When someone accrues as much shit as I do it makes life, you know, difficult and stuff. But doesn’t it just feel like yesterday I was blogging about the, uh, birth of my woman cave? 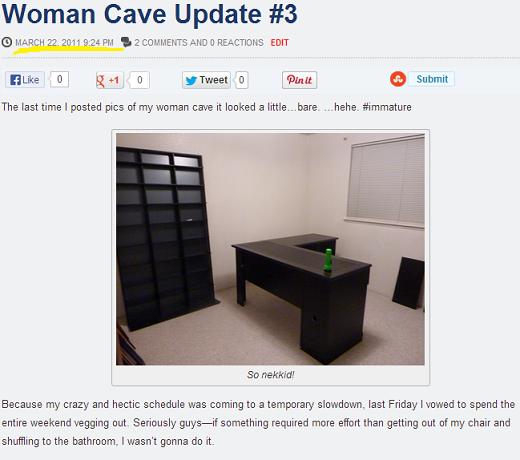 Even though the, ahem, birth of my woman cave was a little over two years ago it friggen’ feels like yesterday, so while I’m packing shit up I’m thinking to myself, “WTFBBQ?! I was *just* doing this!” HNNNGH. I, like, don’t have any strategic battle plans for tackling the packaging up of my woman cave, but I’m starting by boxing up the stuff on the floor. I figure that’s not really a part of my woman cave, seeing as it’s  not on a shelf or anything so HEY it must be good to go. I’m trying to leave everything that’s in or on a shelf alone ‘cuz I still want to make that MTV Cribs-esque tour of my, ahem, woman cave. WOMAN CAVE WOMAN CAVE WOMAN CAVE HOW MANY TIMES CAN I SAY WOMAN CAVE IN THIS BLOG POST?!

Speaking of woman cave (THERE IT IS AGAIN) I’m not sure what to call the latest rendition — the New Woman Cave? But I’m afraid if I go with that I’ll end up pulling a Nintendo a’la Super Mario Bros. and in a few years it’ll be called “NEWER OF THE NEWEST SUPER 3D WOMAN CAVE U MII PENIS BUTTSEX!” .

Anyway, this is, erm, all I have transferred over to my new place: 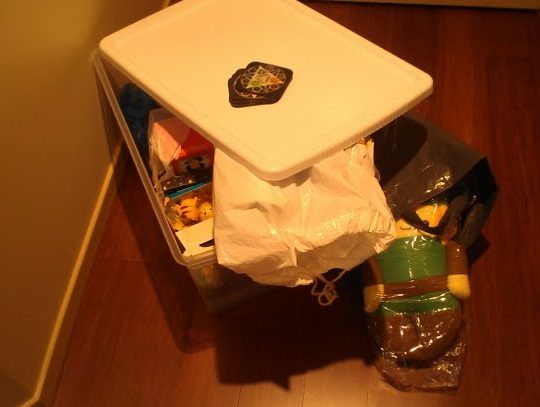 Hey, it’s a start…right? Oh, did I mention I’m supposed to be moved in this Sunday? AAAAAAHAHHAHAHAHAH /headdesk /die /shootself

Thankfully my current apartment is month-to-month, so I can hold onto this place until I transfer everything over.

…The amount of unnecessary rent I spend on my current place is going to be substantial, isn’t it?