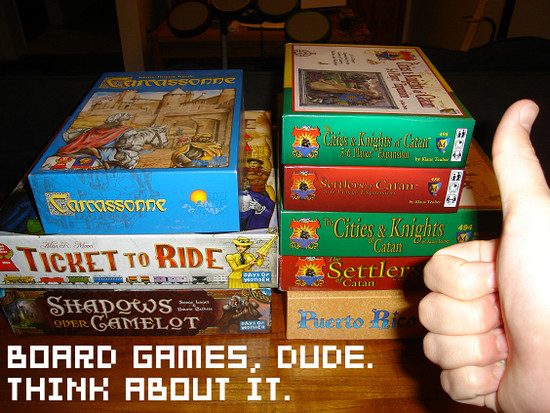 So I’m kind of on a new kick. It’s a very young kick, but nonetheless it’s a beastly kick I’ve been meaning to mount and ride into the sunset for years.

Not like Monopoly or Life or any of those (although I do play a mean Monopoly game. ALL HAIL THE THIMBLE.) but I’m talking fantasy-esque board/card/dice games. Hell, I’m so new to this I don’t even know what to call them. Anyway, like I said I’ve always been intrigued but never had the gusto to drive myself to a store, immerse myself among strangers and, like, learn how to play in fear I’d be a cockblock.

But a few days ago I found a wild hair up my ass and thus recruited a friend to march with me to Barnes and Noble. (The Seattle area has a TON of awesome comic/board game/gaming stores, but right smack downtown has diddly squat.) The mission was simple; find a co-operative board game we could both learn and struggle through together. Unfortunately the game section was teeny-tiny at B&N, but this little, sexy gem called Elder Signs was beckoning me. It wanted my babies; I wanted its. I wanted it so I put a ring on it.

Two hours later we found ourselves completely and utterly mentally exhausted BECAUSE LEARNING THE RULES OF NEW GAME REQUIRES BRAINPOWER. But at the same time it was fascinating and exciting, you know? And Elder Signs has turned out to be nothing short of a really fucking good time.  I love how the game is co-operative and requires immense group planning and strategic talks before every move, not to mention it’s freakin’ brutal.

Thus, this current kick of board gameage was born. So ladies and gentlemen, if you can recommend any cooperative board games I would be in your debt. I love me a good fantasy game, and I’ve heard Lord of the Ring is really good. BUT I DON’T KNOW. Thanks for any suggestions! <33333