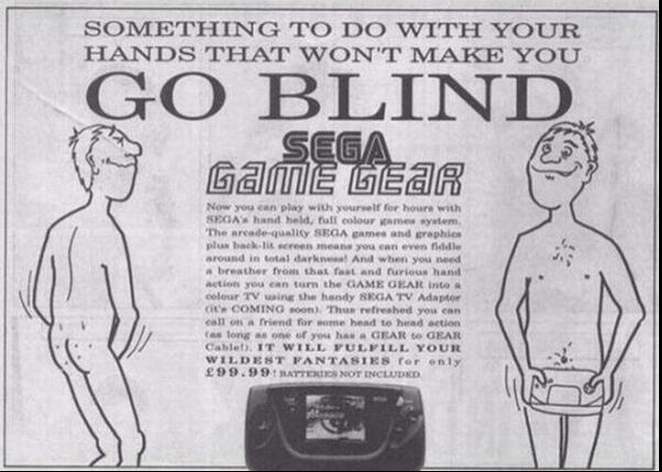 I was perusing @HistoryInPics this morning (I saw a photo of killer Siberian bear-hunting armor from the 1800’s and found myself addicted to ALL OF THE PHOTOS) when I stumbled across this gem. According to the caption, this is an advertisement that appeared in men’s magazines in the UK during the early 1990’s.

Clever clever clever. Speaking of the Game Gear, I, erm, just found three extra units not too long ago. I don’t know how in Alistair’s name I ended up with three, but I did. So look for those to be given away soon cuz ain’t nobody got room for that.

Hmmmm. You know what I loved about the Game Gear? DAT BACKLIT SCREEN. Growing up, my dad and I would always “camp out” in our back yard with our cat. They live on a few acres, so it was a BLAST to set up a tent, roast marshmallows and pretend as though we were miles and miles away. Of course that always went right out the window whenever my mom would do her motherly thing and seemingly come out of nowhere and bring me ten extra blankets, four coats and a hot thermos, but oh well. Anyway, before passing out in my sleeping bag I would dink around with my Game Gear — something you couldn’t do in the dark with a Game Boy — and that always been a fond memory of mine.

Until the batteries died, like, an hour later. That kind of sucked. HOW DO YOU SURVIVE FOR ONLY AN HOUR WHEN YOU HAVE SIX AA BATTERIES.