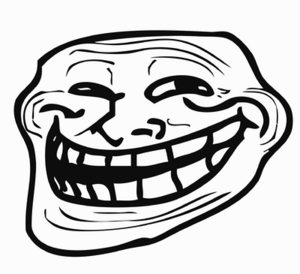 Trolls are a staple of the internet, period. If you publish something on the World Wide Web, sooner or later you can expect someone to chew on it and spit it out. That’s the way it goes.

Seemingly protected by the veil of anonymity, trolls feel that everyone is entitled to their opinion, no matter how harsh or cruel it may be. Here’s how I look at it: if an author was standing on a street corner handing out copies of his novel, would someone take the time to approach this person, briefly skim through the pages and, while looking him dead in the eye, tell him that it’s the worst piece of shit they’ve ever read?

DOUBT IT! The internet is such a strange place; it’s a breeding ground for flame-wars, brainless statements and petty, pointless arguments. Anywho, my motto has always been not to take anything that resembles the following statements seriously:

“YOU GUYS SUCK”
“OMG I want those few secondz of my life bak”
“fail”
“Alistair loves me more than you!”

Personally, I appreciate constructive criticism. How else are you going to grow in whatever field you’re pursuing without honest feedback? But, when you’re told that something is “awful” without reason, it’s extremely frustrating, and I can’t tell if you’re trolling, or if you really had an issue with something.

After our first Episode released, We’re Not Dead ran into its first troll. How adorable <3. Oh, and sorry the text so blurry. I dunno what happened >_< There you go. Kind of frustrating, but anyway, it’s become clear that this kid is not a fan of We’re Not Dead.

You might also recall that next weekend Greg and I are going to Meltdown Comics in LA to attend/host a live reading of We’re Alive (SO EXCITED!!!) and guuueeessss who will also be in attendance?

I have to admit, I’m excited to meet this guy. He may not even know who I am, but I’m curious to see if he’s actually the person he portrays himself to be on the internet. It’s like, okay, I get that you don’t like the podcast, but is that reason enough to be a jackass to my face?  We’ll see. I find it fascinating.