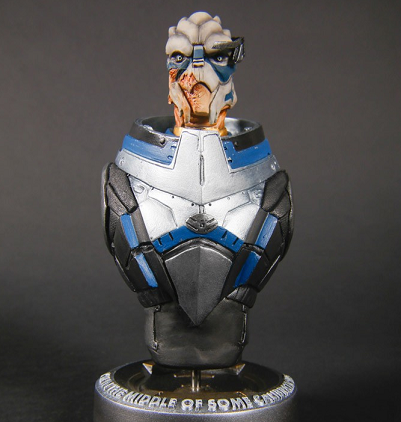 There are going to be so many weird stains and marks on that Garrus statue that by the time I’m done with it, it will be unrecognizable. Mmmmmmm mama’s got a new plaything! (EW I just grossed myself out with that statement.)

But for serious, I need to amp up my Mass Effect collection as it’s pretty pathetic. I don’t even own a legit copy of the first Mass Effect (my friends bought me a used copy that’s missing a cover when I was sick several years back) and I own a regular copy of Mass Effect 2 (my buddy Foz had bought me a CE, and I was supposed to pay him for it, but it was stolen out of his car). Thankfully I own the ME 3 CE (which was a SNAFU all in itself).

Other than the games, though, I own a few books, comics and the collector edition guides for ME2 and ME3. I have a signed photo with the voice actress of Liara (Ali Hillis) and a few photos of Jennifer Hale (femshep) and I, along with her autograph. I also have a signed deck of Mass Effect playing cards and several lithograph posters.  BUT IT IS NOT NEAR ENOUGH.

And obviously the first step of every collection amping is to purchase a…um, a breast? A boob? OH! They’re called “busts” (I knew I was in the ballpark) — so, busts of some of your favorite characters.

As soon as this bad boy ships in June, I’m gonna let the entire world know.