I love BioWare. Seriously. I want their children. Even my Twitter profile says so.

So admittedly, I was a little butthurt when a supposed “insider” told me BioWare wasn’t going to have a presence at this year’s PAX Prime.

Okay — I was really butthurt.

But somehow on Friday, in my hungover, lethargic state, I managed to stumble upon an ENTIRE FREAKIN’ ROOM dedicated to BioWare. (YOU LIE, INSIDER!) And the entire freakin’ room  had its own freakin’ schedule. And there was a huge ass line of people hugging the walls of the room. 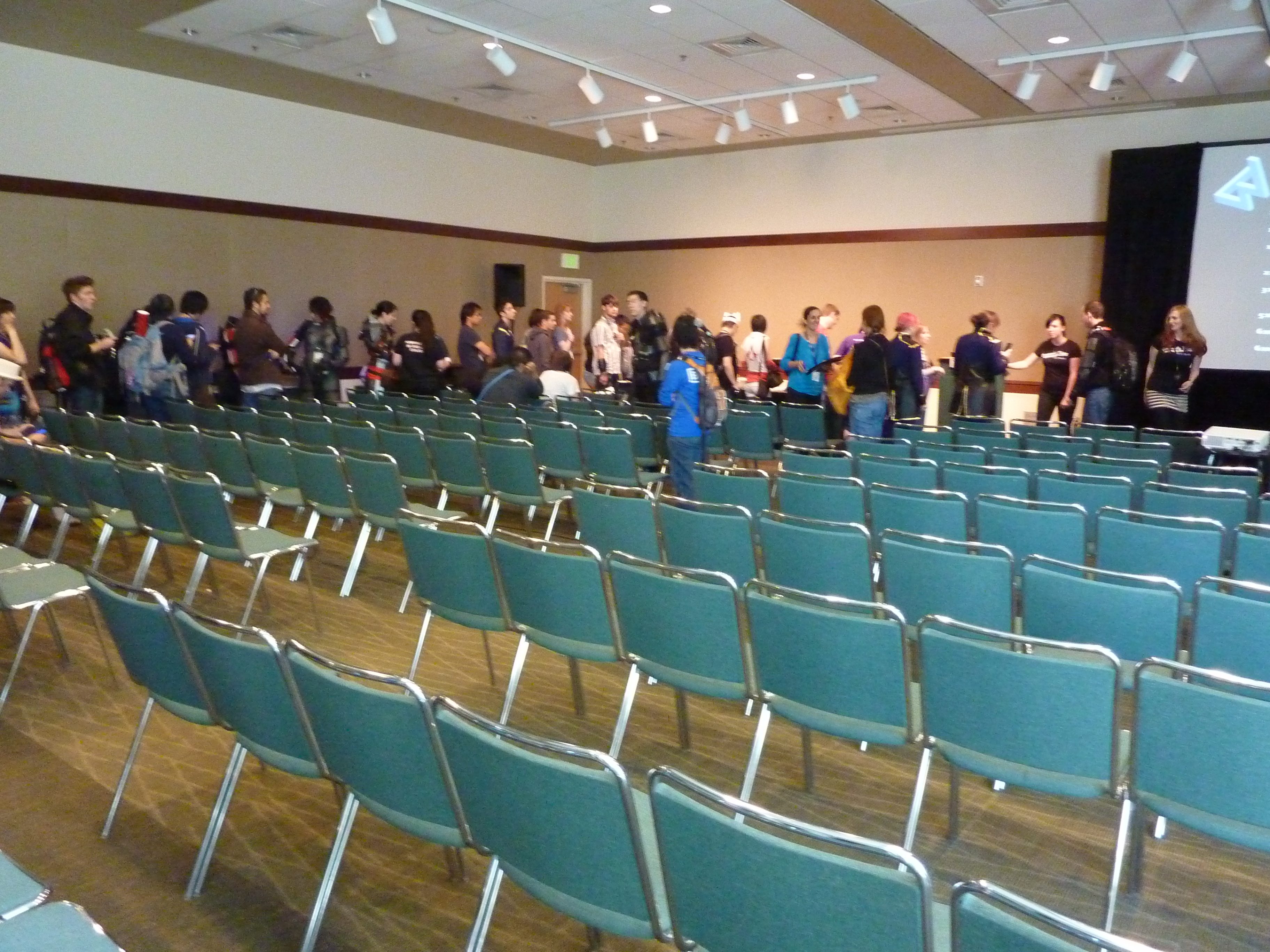 IT TURNS OUT ALLI HILLIS (LIARA!!!) WAS SIGNING AUTOGRAPHS. Okay, yeah, how lucky was I to accidentally stumble across the BioWare Lair?! I quickly got my hungover ass in line and waited for about 20 minutes. Unfortunately, though, the line was too long and a cutoff point was chosen about fifteen people ahead of me. Defeated, I walked out. (But not before checking out Ali. SHE IS SO CUTE.) I think the PAX enforcer moderating the shindig saw my sad panda face, so she reassured me Ali would be be back to sign autographs Saturday and Sunday morning.

Well, Saturday morning rolled around and once again I was hungover. I had every intention of making it to the BioWare Lair on time — in fact, that was my first destination — but I got, erm, lost. I kid you not. Yes, I’ve been coming to PAX Prime for, what, four years now but I still have a difficult time finding my way around. Needless to say, by the time I arrived I was too late.

But I was NOT going to loose my chance on Sunday. Oh, no. Admittedly, I was hungover again (PAX IS NOT GOOD FOR MY LIVER) but nonetheless I got my ass to the BioWare Lair bright n’ early. So early, in fact, that I arrived only ten minutes after the Voice Acting for Video Games panel had started so I was able to pop a squat and watch. MIKE LAIDLAW AKA THE DRAGON AGE GOD WAS ON THE PANEL. Squeeeeeee….

After the panel ended the entire room immediately shifted into “LINE UP FOR ALI HILLIS AUTOGRAPH MODE!”

And, finally, I got my photo and autograph(s). 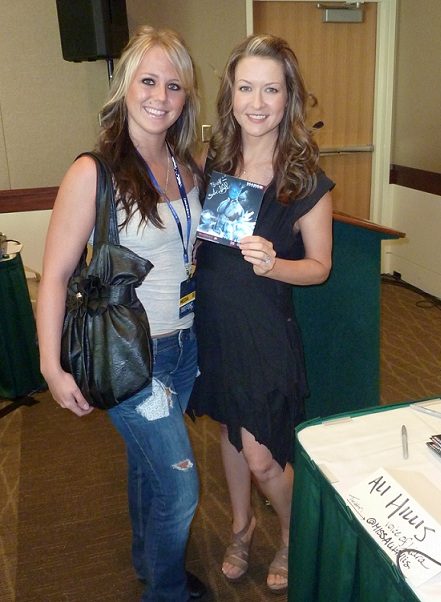 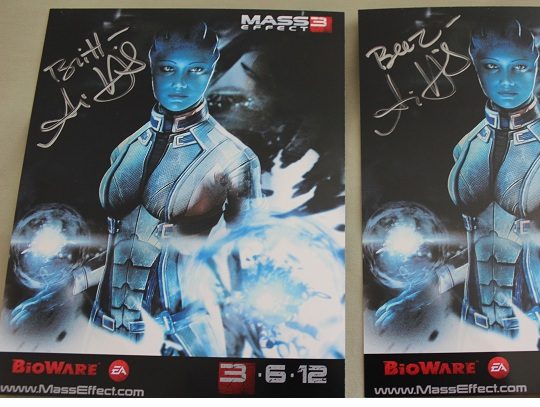 I’m going to take a moment to tell you why you want me to be your friend. You want me to be your friend because if I somehow manage to stumble upon the voice actor/actress who portrays your favorite video game character crush I will get retrieve their autograph for you. You are welcome, Beez. ;D. But for serious, it had been my intention all along to get an autograph for him — he’s with Liara like I am with Alistair. But not as creepy about it. Or obsessed. He actually has an IRL wife. …So I guess I’m going to have to retract that statement. His thing with Liara is nothing like my thing with Alistair.

Getting back on track: while I was standing in line I noticed BioWare had a developer signing event at 6:10. Um, so — and this is what was going through my mind — you mean to tell me I could have a SIGNED copy of Dragon Age: Origins in my Dragon Age shrine?! OH HELL YES I was going to come back around 6:10 — hell, 5:30 just to be safe — and bring a copy of Dragon Age: Origins with me and have those scribble aaaaaaaall over it. I WAS PUMPED.

After receiving my Ali Hillis autographs I wandered the show floor for a bit, played a few games and headed back to my place to crash. I was utterly exhausted and I neeeeeeded some sleep. I set my alarm for 5:15 and passed the eff out.

THE DEVELOPER SIGNING HAD STARTED TEN MINUTES AGO.

Guys, I have never ran around quicker in my entire life. Thank GOD I was only a five to ten minute walk away from the convention center, because I was able get my ass back to the BioWare Lair and in line for signings by 6:40.

Oh. But I haven’t told you something.

I, um, bought another copy of Dragon Age: Origins for signing purposes.

But as I was waiting in line, it appeared as though most of the BioWare staff at the signing event were those who worked on the Mass Effect series (I could be wrong, but I was still half-asleep and that was the ultimate conclusion I came to), so I ended up buying a pack of Mass Effect cards from a dude in front of me and had that signed instead. 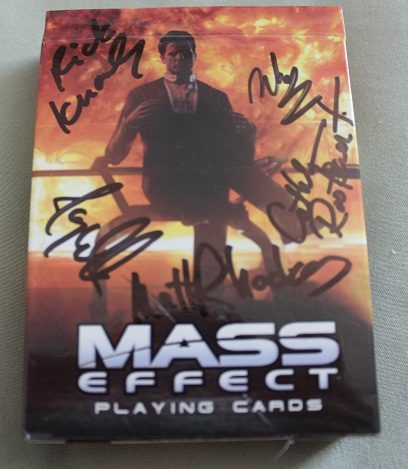 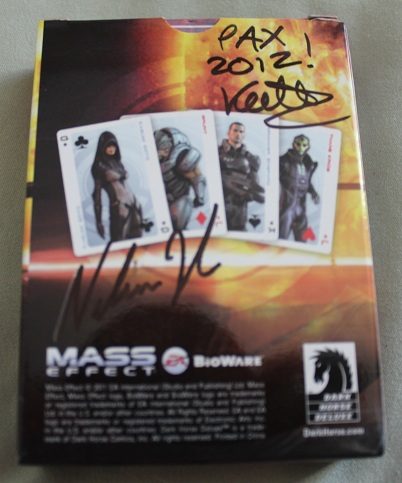 If you can’t tell, BioWare rocked my socks at PAX. I snapped a photo with Ali Hillis, snagged her autograph, was creepy on Mike Laidlaw and had a bunch of awesome people sign a deck of awesome cards. It might not sound like much, but to this fangirl it means SO MUCH SO HARD.